Maher, Toomey decline to vote in favor of federal-level motion
By Marc Levy 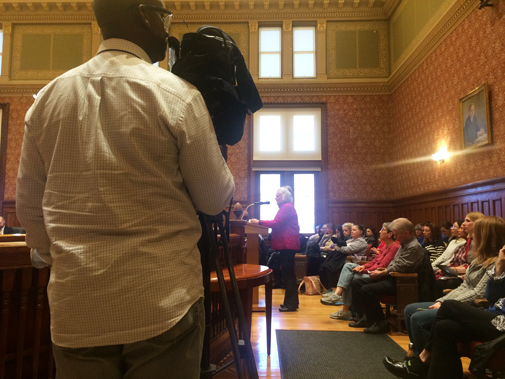 The City Council has called for an investigation into whether President Donald Trump should be impeached, arguing that he failed to divest himself from his business interests and is using the office of the presidency to enrich himself. 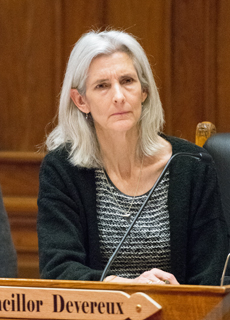 City councillor Jan Devereux is among those calling for an impeachment investigation into President Donald Trump. (Photo: Ceilidh Yurenka)

Councillors passed a resolution 7-1-1 Monday asking the U.S. House of Representatives to direct its judiciary committee to investigate Trump on violating the Constitution’s “emoluments” clause against self-enrichment. The original motion was made by vice mayor Marc C. McGovern and councillors Jan Devereux and Leland Cheung.

The “no” vote was by councillor David Maher, and councillor Tim Toomey voted “present.” Both said the fight would be more properly handled by elected representatives at the federal level, such as U.S. Sens. Elizabeth Warren and Ed Markey.

“I understand the frustration,” Maher said, “but I do believe this is a federal issue.”

McGovern pointed out that council advocacy on state or federal issues was hardly unprecedented. Letting higher elected officials know of the council’s stance “is rather routine for us to do,” he said.

Devereux called their positions “odd and seemingly pointlessly confrontational … it’s obviously our place to amplify what we know” of local feelings on various issues. She said she was disappointed that the vote, which would face an uphill battle at the federal level, wouldn’t be unanimous.

“With a GOP-controlled House, that’s a long shot,” Devereux admitted of impeachment during a Sunday television interview. The Monday council meeting drew more attention as well, with three television cameras and Sullivan Chamber packed with residents eager to share their opinion on the policy resolution.

Among the dozen-plus speakers was Ben Clements, chairman of the board of directors of Free Speech For People, which has a petition calling for impeachment that he said has drawn around 1 million signatures since Trump’s inauguration. He called Trump perhaps the “most corrupt” president in history, and said there was “only one remedy for [his] blatant violations.”

The resolution borrowed language from Free Speech For People, Clements said, and was written with the organization Cambridge Area Stronger Together.

The only defender of Trump among the public was Rachael Worden, who said she voted for Trump, as did her friends, because she feared “one-world government.” She did not offer a defense of the business conflicts alleged by the resolution and other speakers.

Trump and running mate Mike Pence won 3,323 votes in Cambridge in November, or 6.2 percent of the electorate.

McGovern, the first official to speak Monday, said Trump was a “pathological” liar who had raised questions of whether his negotiations with foreign officials were based on the country’s interests or his own.

“The question is not whether President Trump will be found guilty,” Cheung said. “The question is how much damage he will do.” He pointed to threats to federal funding to Cambridge and other immigrant sanctuary cities, as well as to research about climate change and other spending.

Cambridge is the fifth city nationwide calling for impeachment, following the lead of the city council of Richmond, Calif., who voted for an investigation in February. The other cities are Charlotte, Vt., and two other Bay Area cities in California: Berkeley and Alameda.

“It’s a question of safeguarding the U.S. Constitution and protecting the public trust,” Devereux said told Fox 25 News, describing the call as narrow and not addressing the president’s policies – just his intention to abide by the law when it comes to conflicts of interests with his businesses. Though he said he would not be running his businesses, his children remain in charge and have even said that Trump would be briefed “on the bottom line, profitability reports and stuff like that.” And he has inserted a clause into that agreement that allows him to take money out of his businesses at will.