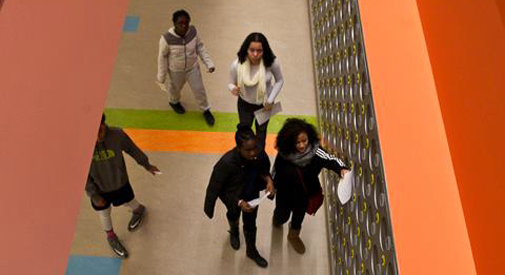 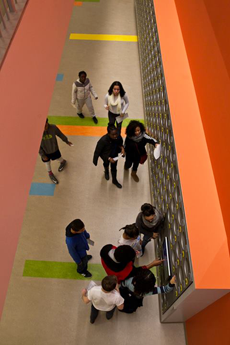 Students use an interactive, energy-based art installation at the Putnam Avenue Upper School at its opening in 2015. (Photo: Cambridge Public Schools)

Parents at two struggling schools were worried how help from the district would continue into the new budget and next school year, and now that the budget has been approved, members of the School Committee are also trying to figure it out.

A May 16 motion by Manikka Bowman, Richard Harding and Patty Nolan tried, again, to get specifics or guarantees from Superintendent Kenneth Salim about how the Putnam Avenue Upper School and Haggerty School will see help from next year’s budget if their unusual challenges persist.

Following Jan. 3 testimony from parents about the ongoing struggles at Putnam Avenue – including persistent dismal state testing scores that put it in the bottom 20 percent of Massachusetts schools, and a near-total failure rate for the eighth-grade Algebra I math test – the committee has been seeking reassurance the financial and staff assistance Salim promised will materialize if needed.

Similarly, for the past two years the Haggerty School has been granted an extra teacher to create smaller classrooms for its current second-grade cohort, and members want assurance the school will be able to continue addressing the needs of this “challenging” grade though the additional teacher is not in next year’s budget.

In both cases, Salim has pointed to non-specific language in the budget expanding the number of reserve teacher positions, which are unfilled until the need arises, and an additional $115,000 for “tiered support for schools in need.”

Since the presentation of the draft budget, parents and School Committee members have – instead of asking for guarantees that were not forthcoming – shifted to asking for transparency on what will trigger use of those resources. Apparently unsatisfied with Salim’s responses to date, the three members proposed a motion calling to identify the criteria that would “determine whether additional resources are needed,” to be delivered to the committee and school communities by June 1.

“I understand the spirit of the motion,” said Salim, but said he hesitated over specifying schools for student privacy reasons, and because other schools might develop similarly urgent needs. Coupling reserve teachers with financial support – separate parts of the budget – in the motion complicated developing “action steps,” he implied. He did agree to provide “a report on what the decision-making process is” for additional supports and a “range of different types of issues.”

“I’m not so sure I understand the confidentiality piece,” Harding said.

“I do think that when we passed the budget we and the citizens that spoke [had] one main sticking point where there was some mystery in how the decision was going to be made – what might come into play so the reserve positions become real or not,” Harding said.

Bowman agreed and, suggesting they could easily uncouple the teachers and funds into separate motions, emphasized the desire to know how and when the schools may get more help.

Members agreed to table the motion so that co-maker of the motion, Nolan, away at an education conference, could weigh in. The next regular meeting is June 6.