Money to tear down Vail Court is approved; call not to replace it with housing is rejected 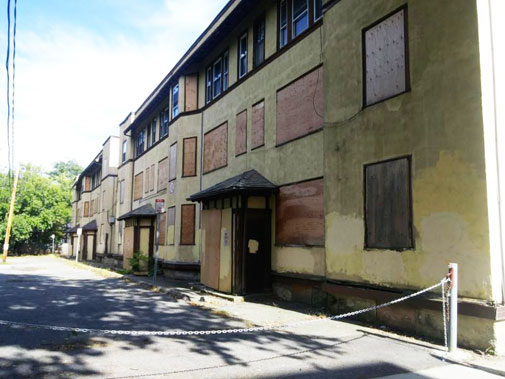 Money to tear down Vail Court is approved; call not to replace it with housing is rejected

The momentum of turning Vail Court into affordable housing continued Monday with the allocation of $750,000 to tear down the two boarded-up, rat-infested buildings and transfer of property to the Cambridge Affordable Housing Trust for development.

The protests of a neighbors’ group who hoped to see the 0.65-acre property at 139 Bishop Allen Drive become something else – a park and community garden was proposed in March – made for barely a speed bump.

Curt Rogers, an Austin Park resident and a leader of Neighbors of Vail Court, said the transfer broke a promise made by Deputy City Manager Lisa Peterson at a March 23 meeting, “when she closed the meeting by stating that there would be further discussion about the use of the property.”

While Peterson did close out the March meeting with the words “we will continue to be in dialogue with you about the use and making sure there is great design for this parcel,” city officials said that was a reference to such things as traditional low-income, senior, assisted or transitional housing. That meeting also made clear a lack of interest in other uses from many officials and residents.

“Yes, let’s talk about what kind of housing is going to go there, but let’s also make sure we’re doing everything in our power to address the most urgent crisis in this city,” vice mayor Marc McGovern said.

“There’s been 12 or 13 or something policy orders over the years about Vail Court, and the majority of them talk about taking it for affordable housing, so this can’t be a surprise,” McGovern said. “The council voted almost unanimously on all these policy orders. I don’t think use is up for discussion anymore.”

The council’s vote in September to allocate $3.7 million to take the property through eminent domain proceedings was in fact based on addressing a shortage of affordable, senior and transitional housing, with then city manager Richard C. Rossi saying explicitly that was a motivation for taking the 24 boarded-up apartment units from family members who’d spent the better part of a decade in court squabbling over ownership and eventual development rights, leaving the site empty and decaying in the meantime.

The council gave unanimous consent Monday for the site to undergo hazardous material abatement and demolition “in the coming months,” with a community meeting planned for 6:30 p.m. Wednesday at City Hall to provide project updates, introduce the contractor selected for the work and to share details about scheduling.

City staff will also begin work with the Trust to set up meetings to hear from the public about what will go on the site. “We’re very interested in hearing from the community both about what type of housing, and also more information about what people are really looking for in terms of scale, density and other urban design considerations,” Peterson said.

That information would go on a formal Request for Qualifications used to hire a developer, officials said, and the request would be shaped by public input and an evaluation of the site itself.

Councillor Nadeem Mazen said he sympathized with neighbors who felt the project was moving fast, saying he wished the votes “hadn’t popped up after a four-week hiatus with no warning.”

But after seeing the property languish, councillor Leland Cheung said he was happy to see the process moving and wanted to see it go “full speed ahead.”

The Trust was “unimpeachable” in its process and the quality of the housing it builds, including the thought given to the surrounding neighborhood, Cheung said. In driving around the city and spotting its handsomest buildings, they were likely to be public housing, he said, because Cambridge “far and away does the best public housing of anywhere in the country … We’re not just giving out shacks.”