Most dangerous intersections for walkers? Take study with grain of salt, experts warn 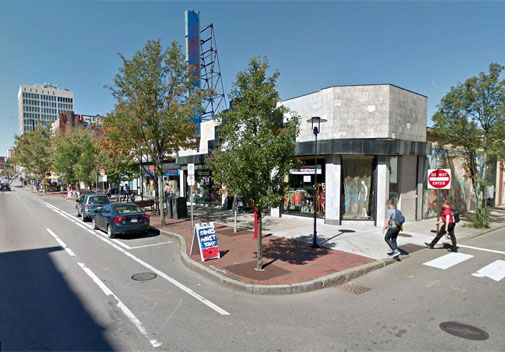 Most dangerous intersections for walkers? Take study with grain of salt, experts warn

Cambridge has 45 of the 496 most dangerous intersections for pedestrians in Massachusetts, or 9 percent, according to a study released by the Sweeney Merrigan law firm in Boston. Cambridge is deemed the second-most dangerous city in the study, after Worcester.

Transportation officials in Cambridge and Somerville had thoughtful responses to the independent study’s findings, but some in Cambridge warned that the findings aren’t as alarming as they might seem at face value. Pedestrian crash hotspots “mirror population density almost exactly” and of course happen in cities where walking is common, said analysts in the Cambridge Police Department’s Crime Analysis Unit, which released its own report in May.

“I’m actually somewhat surprised that Inman Square doesn’t show up on their list and map, given what we know about it from our study,” said Cambridge Traffic, Parking & Transportation Department Director Joseph Barr. “That alone makes me wonder a little about the methodology and/or the quality of the data.”

Trouble spots in Cambridge identified by the independent study include the intersection ranked the second-most dangerous in the state – at Massachusetts Avenue and Norfolk Street at the heart of Central Square, where the study found there had been 26 crashes and 18 injuries, though no deaths, between 2001-14. (The most dangerous intersection in the state? Lakeview Avenue and Bridge Street in Lowell, where there were 23 crashes, 19 injuries and two fatalities.) In that period, there were nearly 11,000 pedestrian collisions throughout Greater Boston, leading to 307 deaths and 8,108 injuries. 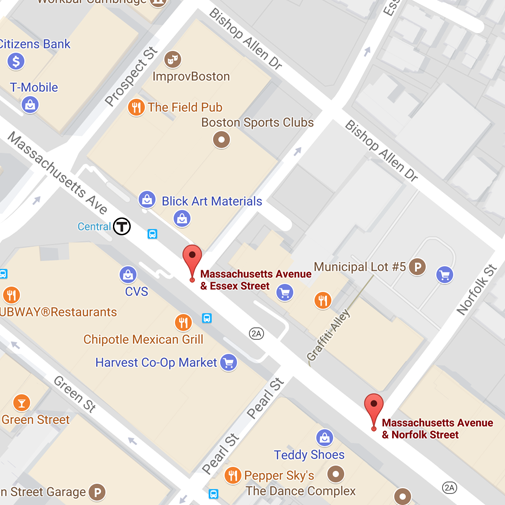 Central Square has two dangerous intersections next to each other, according to a law firm study.

Cambridge’s next appearance on the ranking is at No. 18: Massachusetts Avenue and Essex Street, where the study found 17 crashes and 10 injuries only a block from the city’s other most dangerous intersection.

“We identified 12 clusters in the area – in Boston, Cambridge and Chelsea – with a high concentration of both pedestrian collisions and dangerous intersections. The most notable of these clusters is found along Massachusetts Avenue in Cambridge,” the study said. “Nestled between MIT and Harvard University, this stretch of Massachusetts Avenue was the site of 196 pedestrian collisions [and] contains 15 of the dangerous intersections identified by our analysis, the most of any area in the entire state.”

Other high-incident areas include Harvard and Porter squares in Cambridge, Chinatown in Boston and Somerville’s Davis Square.

Boston has only 22 of the most dangerous intersections as interpreted from the data, but “Boston is notoriously bad at reporting pedestrian accidents,” said Rob Tindula, outreach coordinator for San Diego data visualization firm 1point21interactive, which was Sweeney Merrigan’s partner in the study. The study notes the aberration that results from the widely known lapse: “Consider that Boston, with a population more than three times the size of Worcester, had less than half the number of dangerous intersections and very few high-risk clusters.” 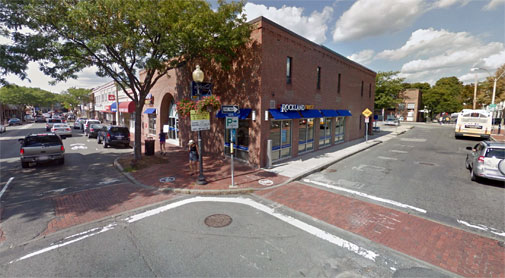 “In such a densely populated city with an ever-increasing number of residents choosing to walk or bike, traffic safety is one of our constant priorities,” said Denise Taylor, director of communications and community engagement for the City of Somerville, pointing to efforts such as lowering the citywide speed limit to 25 mph, as Cambridge did in December; establishing 20 mph safety zones; and targeted projects for specific intersections or entire neighborhoods.

At Highland and Grove, Somerville recently added marked bike lines and upgraded all markings and signs for better visibility, Taylor said, and a Davis Square Streetscape project will address traffic patterns and issues throughout the square. “At Central and Highland, speeding, jaywalking and running of red lights are the main contributing factors, so we need to change behaviors,” she said. “We’ve stepped up police enforcement at that intersection to do just that.”

Similarly, Barr acknowledged a need for safety improvements for all users along Massachusetts Avenue, making the law firm’s finding “not a big surprise.” 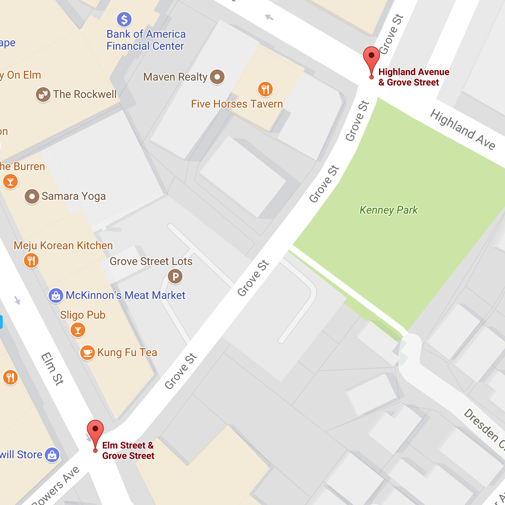 But he and the police experts were otherwise skeptical of taking the study’s findings too seriously, at least without knowing more of its methodology. It doesn’t distinguish between serious and minor injuries, for example. The study targets 496 intersections – far less than 1 percent of all intersections throughout the state – by finding those with five or more pedestrian collisions within the period data, but that’s still a 14-year stretch, police noted.

“This isn’t meant to minimize the devastating results of fatalities and injuries that result from crashes,” police said in an email. “It is meant to put it in context. Reading the headline it is easy to assume people are being injured on a daily/weekly/monthly basis at these intersections, which is simply not true.”

Rather, the intersection labeled “most dangerous” by the report averages 1.86 crashes and 1.26 injuries annually.

Police weren’t convinced the study’s crash map showed Cambridge as a dangerous city for pedestrians as much as “it shows that the combination of high population density with large numbers of pedestrians leads to a higher risk of conflict between motorists and pedestrians.”

“Obviously, we still need to work to reduce and eliminate the crashes that we do have, but given that we have one of the highest levels of walking in the country, it’s not surprising that also leads to a higher level of pedestrians crashes. We would really need to look at crash rates and the level of exposure to start to make more meaningful comparisons,” Barr said.

“As a result, I would strongly disagree with any characterization that Cambridge is a dangerous place for pedestrians,” he said.

Barr was also wary of its source: A personal-injury law firm releasing a study about injuries?

A focus on safety

But Tucker Merrigan, a partner at Sweeney Merrigan, said the study – which took around four to six months from start to finish and several thousand dollars to pull off – is in line with past firm efforts such as scholarships for first responders and an effort against drunken driving that gave $15 vouchers on New Year’s Eve for Lyft rides to people pledging to be safe on the road. “A lot of firms spend a lot of time talking about themselves and money. We try to spend time fixing safety issues,” Merrigan said Thursday. “We’re always trying to roundtable different things we can focus on.”

“We’re an injury firm,” he acknowledged. “Every case we handle is, from our point of view, preventable, so we funded this study with the same values. The cities will hopefully respond by putting up better safety precautions.”

The firm’s data, obtained with a Freedom of Information act request to the state Department of Transportation, revealed:

6,696 people were hit while inside marked crosswalks at intersections.

785 people were walking, running or standing on a sidewalk when they were struck. Of those, 627 were injured and 26 were killed.

25,056 pedestrians were struck by vehicles statewide, resulting in 871 fatalities and 19,361 injuries.

Drivers in the 25-34 age range were involved in the highest number of pedestrian-related injury incidents, followed by the 45-54 age group.