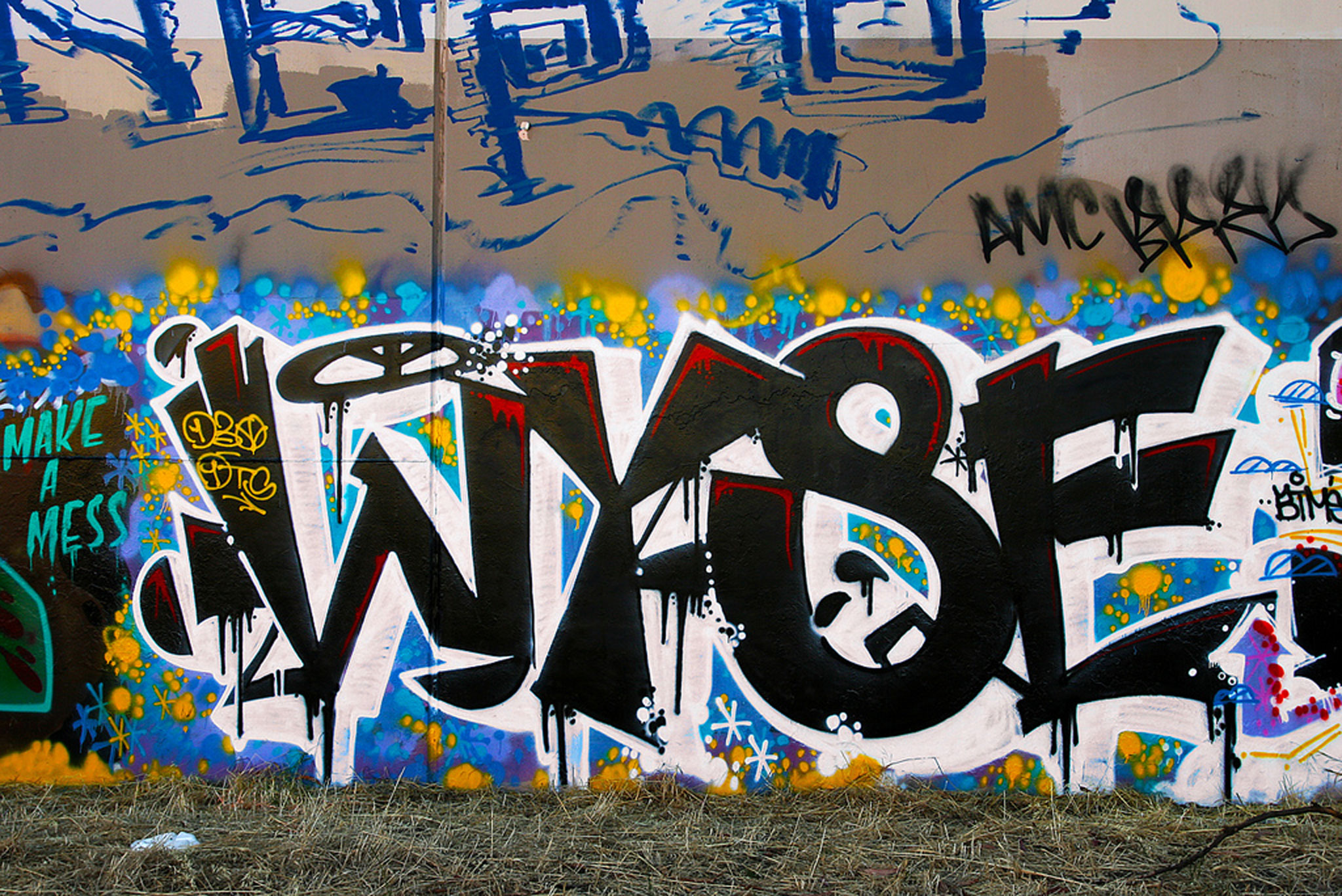 A vibrant “Wyse” tag is seen on a California building in 2010. (Photo: Steve Rotman)

What’s in a graffiti artist’s “tag?” Not enough, by itself, to convict him of defacing MBTA cars, the state Appeals Court ruled Wednesday.

The court reversed two convictions of John Biesiot, 37, because testimony merely associating him with two particular graffiti designs wasn’t enough to prove he was the one who sprayed the images on cars in the Reservoir and Codman Square train yards in 2008, the decision said.

But the court upheld Biesiot’s conviction for defacing a subway car in the underground yard of Cambridge’s Alewife station. In that case, an MBTA worker saw him using a tripod to take photos of the car, which bore one of his tags, at 3:45 a.m. on March 15, 2010. The worker had seen the graffiti around the same time, and smelled fresh paint.

While it’s “conceivable” that Biesiot had “non-nefarious reasons” for setting up a tripod and camera at Alewife and photographing “freshly painted graffiti” at 3:45 a.m., “a rational jury could have reasonably inferred [he did it] to memorialize his recent vandalism in order to gain ‘credit or fame,’” the court wrote.

Jake Wark, spokesman for Suffolk District Attorney Daniel F. Conley, pointed out that the decision held Biesiot accountable for vandalizing MBTA property at Alewife. “We believe and a lower court held that the evidence was sufficient on the other cases as well,” Wark said.

Biesiot’s lawyer, Dana Alan Curhan, said the Appeals Court “correctly reversed and vacated” the convictions involving the Reservoir and Codman Square vandalism. Curhan said he is considering applying to the Supreme Judicial Court for reconsideration of the decision upholding the Alewife conviction. No one saw Biesiot defacing the subway car, and a second person was seen talking to Biesiot before he took the photographs; there is a “fairly strong inference from the evidence” that the second man did the tagging, Curhan said.

In 2014, Biesiot was sentenced to a year and a day in jail for defacing the cars at Codman Square and suspended sentences and probation in the other convictions, to begin after he finished his jail term. The Appeals Court ordered Biesiot resentenced. Wark said he had completed his jail sentence and would probably be resentenced to probation for the Alewife offense, starting at the end of his jail term.

Biesiot’s prosecution drew substantial publicity. He had been charged with vandalism in numerous states and lived in Chicago, although investigators found evidence that he was staying in an Allston apartment that contained a can of spray paint and the design for one of his signature tags, “Wyse.” He also used the tag “D-30” and prosecution witnesses said he was part of a gang called the “Dirty Thirty” that made graffiti forays in the Boston area, though his tagging history may date back to 1996 and to locations as varied as Arkansas, California, Illinois, Minnesota, Missouri and North Carolina. Biesiot is from Chicago. 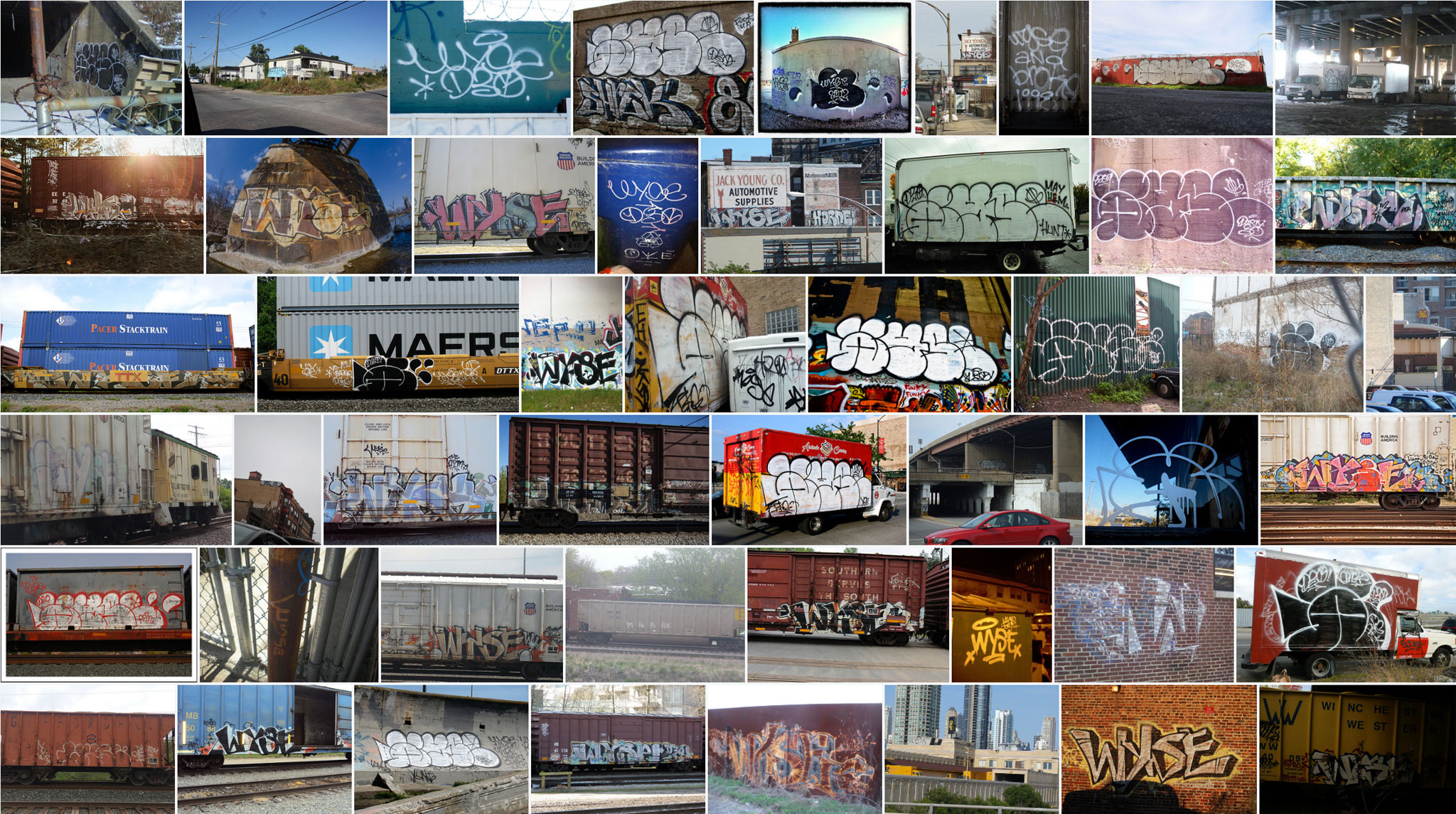 A search for the “Wise” graffiti tag on Flickr brings up thousands of hits.

When Biesiot was convicted, Conley said his crimes were “part of a massive vandalism spree that carried massive cleanup costs.”

In an effort to tie him to the incidents at Codman Square and Reservoir, the prosecution presented a photo of him painting “D-30” on a newspaper box, but no information about where the box was. Prosecutors said the photo came from “an organization in Minnesota” that they didn’t identify.

Prosecutors argued that Biesiot’s tag was, in effect, “a ‘signature’ or ‘moniker’ associated with the defendant” and a jury could “conclude that where property had been tagged with ‘Wyse’ the defendant painted the graffiti,” the appeals court said. It rejected that argument, noting there was no evidence that Biesiot was ever at the Codman Square or Reservoir subway yards.

The Appeals Court also said the evidence found in the Allston apartment and the photo from the Minnesota group was not enough to conclusively tie Biesiot to the vandalism at Codman Square and Reservoir. But the decision didn’t rule out the possibility that with a different set of facts, prosecutors might use a graffiti tag to identify and convict a suspect.