Bike lane ‘battle over Brattle’ breaks out, with councillor rebukes for fellow officials 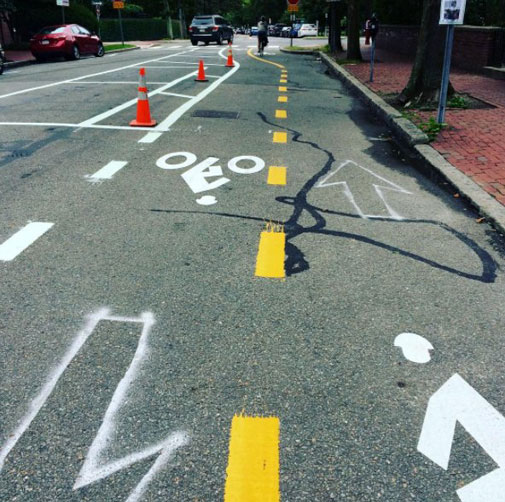 Bike lane ‘battle over Brattle’ breaks out, with councillor rebukes for fellow officials

@CambridgeDPW Thank you for the Brattle Street bike lanes! We love them. They really cut down the commute time to Harvard Square. pic.twitter.com/biPEiVAOSj

It was just a rocky rollout for bike lanes on Brattle Street in Harvard Square, but it delivered fears of a moratorium on future safe-bicycling infrastructure and complaints from city officials to Monday’s meeting of the City Council, its only meeting of the summer.

While the Brattle Street bike lanes will remain, councillors are looking for more outreach and thoughtfulness in the future, and a look at what went wrong on this rollout after more positive rollouts of bike infrastructure elsewhere in the city. But they also cut back a mayoral policy order deemed to have problems of its own.

The installation of a two-direction, pylon-protected bike lane on Brattle Street in late June came as a surprise, including its placement of parking between car and bike traffic. “More time was needed to come up with a mutually beneficial solution,” said Bill Manley of the Harvard Square Business Association, citing worries about parallel parking, occupants of cars stepping out into either moving cars or bikes, access for emergency vehicles and the new awkwardness of making deliveries to businesses through two-direction bike traffic.

It’s brought about a 20 percent to 25 percent drop in business at Hillside Cleaners, located at 49 Brattle St. since 1946, owner Mark Levine said. “My business has been negatively affected by people working from home and casual Fridays,” Levine said to some laughter. “As business owners, we pay a premium to conduct business in Harvard Square. It takes a certain volume of business to remain profitable … With the new bike lane, you’ve eliminated the ability of a customer to quickly and safely conduct their business at my store.”

But among the more than 30 citizens who spoke during public comment, there were many bicyclists and others who embraced the new infrastructure – including Suzanne Blier, of the new Harvard Square Neighborhood Association, who lives and works near the new lanes. She was a fan despite knocking the mere week’s notice offered by the city’s Traffic, Parking & Transportation Department as inadequate.

“This change was at first shocking. Almost everybody was surprised and startled, and everybody was discontented there was no input on our behalf. But in the days ahead it has completely transformed. It has made a huge difference to my life and others,” Blier said. “The cars have slowed down … you can cross the street easily without worrying about your safety, and I’m seeing parents and kids with bikes coming along the bike lane. And what some of the neighbors have suggested to me is that it reminds them of Amsterdam and Paris.”

And as a Hillside customer, Blier said, she sees a reasonable amount of parking for delivery vans and customers, especially on bikes – and noted that the customer access Levine had referred to had largely been illegal double-parking. Others pointed to research showing that businesses generally benefit from better bike access. 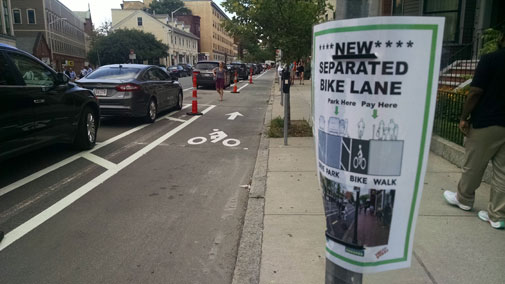 A protected bike lane was also added to Massachusetts Avenue east of Harvard Square this summer. (Photo: City of Cambridge)

In addition, councillors were reminded by proponents that the origin of the protected bike lanes throughout the city was an epidemic of crashes between bicyclists and drivers of cars and vans, including two deaths roughly a year ago. Nearly every bicyclist present Monday urged councillors to vote against a policy order by Mayor E. Denise Simmons, joined by councillors David Maher and Tim Toomey, to “withhold further implementation of new pop-up lanes” until neighborhood meetings were held – interpreted as a moratorium on safety measures.

“To delay safe bike infrastructure simply to have more meetings seems like a senseless stalling during a 30-day stretch people are biking the most, the summertime,” said Laura Borrelli, a science teacher at Cambridge Rindge and Latin School who runs a campus bicycle advocacy group. An internal survey show 45 high school students biking on Brattle Street and more than 130 using Cambridge Street.

“I overheard someone saying there are going to be problems if things are done too hastily,” Borrelli said. “There are problems, and they’re called bike crashes. They’re called drivers who don’t know that bikes are supposed to be on the road.”

Hours later, as councillors got around to discussing the order that alarmed the cyclists so much – it was critiqued as “badly worded” policy that “feels divisive” – Simmons had rewritten parts to avoid confusion that it would institute a moratorium on bike safety infrastructure. “This is not, nor was it ever, a moratorium,” Simmons said. “It’s somewhat unfortunate that people got fired up over a misunderstanding.”

She merely wanted more stakeholders in the neighborhood to be consulted and warned before installation, she said.

But her fellow councillors had concerns as well, with vice mayor Marc McGovern saying he’d been “confused by the order myself,” finding it could be read as suggestive of a moratorium yet never mentioned Brattle Street, and councillor Craig Kelley saying he found much of the language to be “judgmental” against bicycling, his own preferred mode of transportation. (The order even begins by saying “the city has been making strident efforts to increase the safety on our streets,” through “strident” is a critical term implying insensitivity and excessive force.)

Questions remain about truck, snow plow and emergency vehicle access. But considering the conversation that was already taking place and the awareness raised at Traffic, Parking & Transportation, councillor Nadeem Mazen wondered whether an order was needed at all, and councillor Jan Devereux said the issues might be overblown on what she quipped was the “battle over Brattle.”

In the end, the order was reduced on Kelley’s suggestion: It went from one paragraph of action “ordered” and six of background (the “whereas” paragraphs) to merely the single “ordered” paragraph seeking more stakeholder involvement.

Still, councillors agreed the Brattle Street process had been bad, exacerbating a citywide transportation conversation that Mazen and Kelley agreed was “broken.” They were surprised by the lack of effort made to alert neighbors and even immediately affected business owners.

“If we can point back to an open, fair, inclusive process, it makes it much easier to say to those folks who aren’t happy, ‘You had input. We listened to your input and made a different decision,’” McGovern said. “I don’t think we can say that about Brattle Street … We have a lot of great minds in this city, and yet a lot of times we come back to ‘Well, yeah, we didn’t do what we should have to reach out to people.”

“I just don’t get why that’s still a problem,” McGovern said.

Contacted Tuesday for comment, Brooke McKenna, assistant director for street management at the Traffic, Parking & Transportation Department, said the Brattle Street project responded to public need and did have a process, albeit one that fell short.

Outreach “included an open house at the City Hall Annex, review by the Cambridge Bicycle Committee, a presentation to the Harvard Square Business Association and fliering in the neighborhood, based on our past experience with this type of project. While Public response indicates we did not reach everyone we could have, we are confident that ultimately the Brattle Street design can work well for everyone,” she said. “We will absolutely use this as a learning experience as we plan outreach for future projects.”

She also noted the project’s origins:

“The Brattle Street project was the result of a Participatory Budgeting item requesting the implementation of protected bike lanes on a short-term basis. With the additional City Council orders passed last year urging the implementation of these lanes on a fast track, we identified Brattle Street and a portion of Massachusetts Avenue (from Bow to Trowbridge streets) as the right locations …  Our next project, the Cambridge Street Separated Bike had a significantly larger outreach effort, and the feedback we have heard on that process has been positive.”

The department expected the lack of impact on parking to mean less outreach, but has learned that’s not the case, said transportation director Joseph Barr. While it’s happy with what’s been installed on Brattle, there may yet be tweaks. “We always expected that there would be adjustments,” he said.