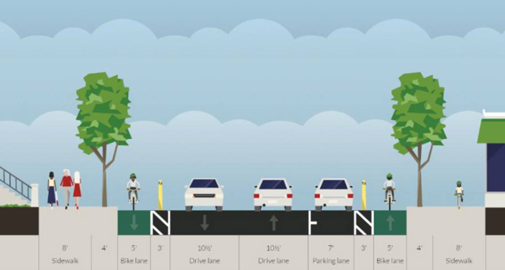 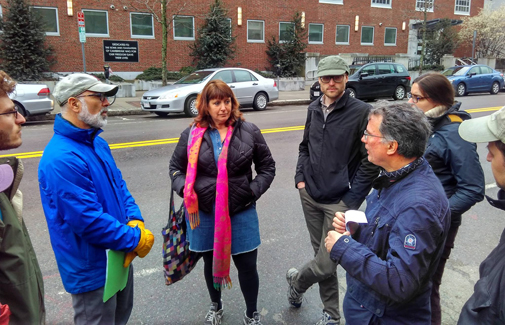 Members of Cambridge Bicycle Safety listen to Dutch transportation planner Jan Nederveen on Sunday on Cambridge Street, which is getting a protected bike lanes. (Photo: Michael Davidson‎ via Facebook)

The first public meeting on a Cambridge Street separated bike lane project drew some 150 cyclists, street residents and concerned business proprietors and others Tuesday, and the design – shifting the bike lane between parked cars and the curb – and summer timeline were received with overwhelming support.

The proposed lane passes by major city waypoints including Cambridge Rindge and Latin School, where high schoolers have been advocating for a safer way to bike to campus, Cambridge Hospital and the Cambridge Main Library. The meeting was held at the school.

“As the mom of a CRLS student who bikes to school, and as a bike commuter myself, I can’t wait for a comprehensive network that will allow us to get around the city safely and without polluting,” said Ruthann Rudel, a Rindge Avenue resident and Cambridge Bicycle Committee member.

A graphic shows how a separated bike lane would work on Cambridge Street.

The separated lane, which will run from the Harvard Science Center overpass to Inman Square, is the result of city efforts to expedite safer bike infrastructure since the cycling deaths of Amanda Phillips in Inman Square in June and Joseph Lavins, struck by a truck in Porter Square three months later.

There had been concern in February that the rollout of infrastructure changes were coming too slowly. At Monday’s unveiling of the proposed budget for the upcoming fiscal year, City Manager Louis A. DePasquale said $2 million was set aside for Vision Zero street safety initiatives and $6 million for Inman Square improvements – double the amount first planned.

During a long Q&A period, misgivings about the Cambridge Street plans were heard from the owners of two businesses there, Coady Flowers and Skenderian Apothecary, who expressed concern about the ability to park and unload if bikes were passing between storefronts and a parked vehicle unloading.

The city was seeking to set up designated loading spots in key areas and would not rule out relegating the leading parking space on a nearby side street for just such a purpose, Baxter said.

Other concerns voiced were about education and enforcement, especially regarding Uber and Lyft car service drivers parking “anywhere they feel like it and whenever,” as one attendee said. Another, citing parked cars shifting closer to the centerline to make way for the cycle lane on the right, pointed out the dangers of double parking consuming the entire vehicle travel lane, pushing passing cars into oncoming travel.

On the positive side, Steven Bercu, a Cambridge resident and president of the Boston Cyclists Union, hailed the effort. “In addition to improved safety for all users of the street, a project such as this can demonstrate the potential to reclaim our streets as vital public spaces that are cleaner, more inviting, more economically productive, more social, more interesting,” Bercu said.

Rudel echoed Bercu’s sentiments. “I’m relieved the city is moving forward to make cycling safer by building protected lanes,” she said. “These are the new standard in many cities, and they dramatically reduce injuries and fatalities while increasing the numbers of people on bikes.”

“Plus it is way more fun to bike around this city than sit in traffic,” she said.

This story was updated April 29, 2017, to correct a photo caption. The people in the photo are members of Cambridge Bicycle Safety; a different bicycle group had been previously mentioned, incorrectly, as being present.