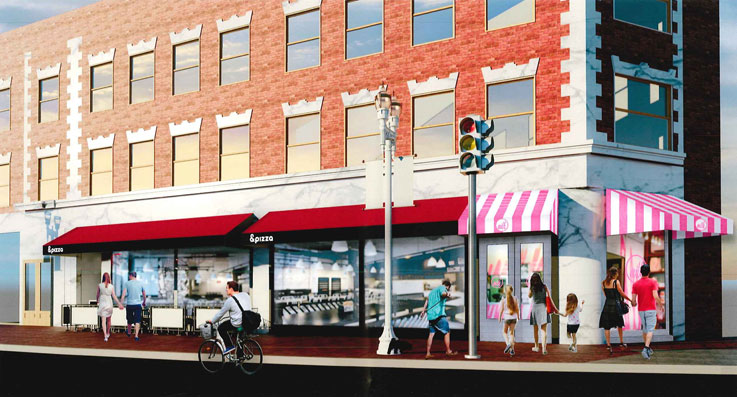 A recent design for &pizza’s proposed eatery in Harvard Square.

Will the combined &pizza and Milk Bar eatery get the four out of five votes it needs to open at the center of Harvard Square?

We’re unlikely to find out at 9 p.m. Thursday, when the beleaguered project was to return to the Board of Zoning Appeal. At 1:32 p.m. Wednesday its attorney filed a letter asking the board to delay the hearing until September, to allow &pizza to consult with the city’s urban design staff. The zoning board almost always grants continuance requests, but this project has been through so many hearings that they may be more judicious.

Update on Aug. 11, 2017: After more than an hour’s debate about whether to continue the case, the zoning board voted unanimously Thursday to delay the &pizza case until 7 p.m. Sept. 28.

The Washington, D.C.-based pizza chain is seeking a fast food special permit to open at the combined former locations of the Tory Row restaurant and Crimson Corner newsstand. This will be the 10th hearing in a process that started in December with multiple city boards and seemed to end in April with a firm rejection by the zoning board – but &pizza filed an application to restart the process in June. (In that time, it’s gone from being called “&pizza” to “milk &pizza” and back.) 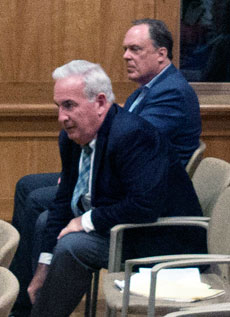 On Monday, 12 minutes before the 5 p.m. deadline, &pizza filed revised plans with the zoning board (pdf). The company eliminated umbrellas on the Tory Row side to give its &pizza portion two crimson awnings with black trim; and give its Milk Bar dessert bakery two pink-and-white striped smaller awnings on either side of the Massachusetts Avenue and Brattle Street corner.

&pizza has also retained local permitting attorney James Rafferty. Rafferty wrote the zoning board that the latest round of changes incorporate design suggestions from the Planning Board’s Aug. 1 meeting and “subsequent consultations” with Planning Board staff.  He also highlighted Ranney v. Board of Appeals of Nantucket, a court case arguing that, in the event of a repeat petition, the zoning board only needs to find that applicant has made changes to the elements of the application the board based its denial on. When the board rejected &pizza in April – it got three out of five votes but needed four – it faulted &pizza on failing to show a need for more pizza in Harvard Square and the appearance of the storefront. Need and design are criteria in the zoning ordinance.

On Aug. 1, the Planning Board met and discussed &pizza for nearly an hour to provide nonbinding recommendations to the zoning board. Although planning staff produced a one-page report, the board’s discussion was nuanced.

But the meeting was peculiar.

The board began by asking “Is there someone here for the applicant?” Drew Murphy from &pizza and Rafferty sat at the front of the room but did not respond, so the board began to discuss the case without a presentation from &pizza. This was particularly odd because the first comments came from Hugh Russell, who explained he had two sets of plans and wasn’t sure which to look at, including those submitted to the board in June.

“I was copied on an email from, I guess, the president of &pizza, who sent me a different set of plans,” Russell said. “And &pizza has done this at every BZA hearing – submitted one thing and showed something else. So it’s hard for me to know what to comment about. I thought the most recent plans were pretty gross, equaling perhaps the Crimson Corner canopy before they replaced it about 10 years ago, which was really awful.”

At that point, this reporter rose to confirm that the Planning Board was aware &pizza was in the room. Some members were not. 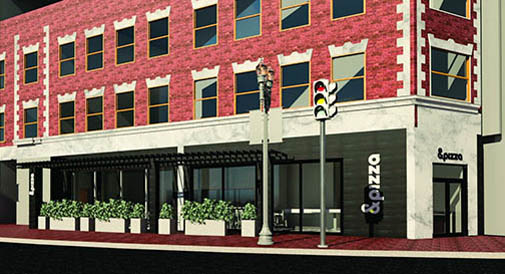 Design for &pizza has evolved since  he original design proposal by &pizza included a trellis that drew a sharp “No” from the Historical Commission.

“I want to be clear on the record that they should look at that finding in light of the way there’s a festival atmosphere of youth in that square. It readily supports multiple pizza places … they have to look at theirselves pretty carefully about what seems like an arbitrary decision to just say no,” Sieniewicz said.

Sieniewicz also said “government is not working very well here … we’re becoming a laughingstock of public process” despite his thinking “we have a really good public process.”

About design, “these folks need some help,” Cohen said. “This city has the resources and should … provide that help and come up with a design that we and the ZBA can support and approve.”

“I’m sorry that the staff is going to be charged with designing the pizza place – that doesn’t seem like a service the city needs to provide,” Sieniewicz said. “It is a frustration that they’re just throwing things at the wall hoping something will stick. It’s a ridiculous process.”

The board then took comments from &pizza representatives and the public.

Murphy told the board his architectural staff could move “very quickly” in accord with city staff, and he had “no problem with that whatsoever.” But he spoke only briefly, and did not attempt to explain the multiple sets of plans or summarize the current proposal.

Three members of the public spoke who have consistently opposed the project: Suzanne Blier, James Williamson and Marilee Meyer.

The board ultimately concluded it should recommend that its own urban design staff work collaboratively with &pizza as well as staff from the Historical Commission and Inspectional Services (which supports the zoning board). Iram Farooq, the assistant city manager for community development, said she was prepared to devote staff resources to what she called “an unprecedented move.”

It is not at all clear how &pizza’s continuance request is consistent with the Planning Board guidance, nor that planning and design staff would be available in the absence of a request from the zoning board.

“I know what we don’t need,” Sieniewicz said. “We don’t need a boarded-up, vacant, retail suite at the 100 percent corner in our city. We do not need that right now. It’s awful. And it’s a thumb in the eye. We need some activity and we need some life. And we need someone to try something in that corner. That’s what we need.”