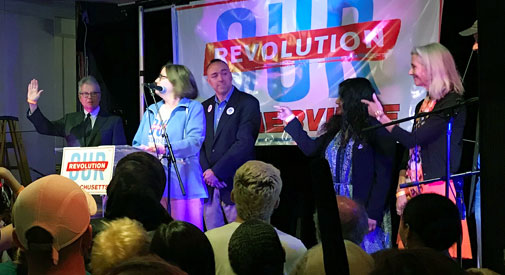 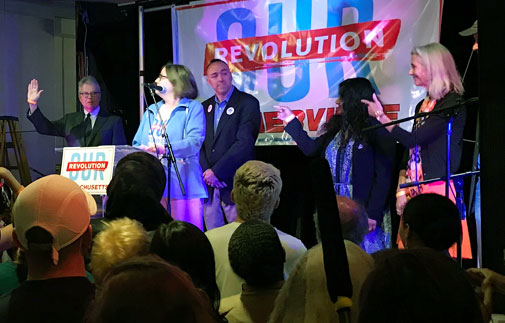 Candidates for City Council endorsed by Our Revolution Cambridge take the stage briefly Oct. 23 at an event in Somerville.

Received Oct. 28, 2017: How and why did Bernie Sanders choose to lend his support to candidates in the upcoming City Council race in Cambridge? A recent letter to the Vermont senator regarding his visit to Somerville last week asks exactly this. The letter, signed by “Democratic activists” in Cambridge, expresses “disappointment” in Sanders’ apparent endorsement and questions his decision to become involved at all. But in questioning Sanders’ decision, they question the validity of his vision for meaningful grassroots change at the local level.

In Somerville, Sanders said, “The local level, more than any other, involves people” in the political process and builds change “from the bottom up.” This idea is the cornerstone of the political revolution Sanders espoused during his 2016 presidential campaign and is the foundation of Our Revolution, the organization many Sanders supporters have directed their energy toward since the presidential race ended.

Sanders’ critics challenged him to pick the endorsed candidate from their list of six candidate biographies. Notably, the critics do not include facts most would consider important to Sanders’ decision: Three of the six listed candidates did not seek the endorsement of Our Revolution Cambridge. Two of the remaining three did not acknowledge campaign finance as an important issue in local politics. Only one candidate highlighted political donations from special interests as a “serious problem.” Unsurprisingly, this is the candidate endorsed by the local chapter of Sanders’ organization.

Our Revolution Cambridge’s endorsement process was built upon the national organization’s guidelines. Our lengthy questionnaire was developed, voted on and approved by our membership after more than a month of work. It was completed and returned by 15 of the 26 candidates running. Group members then voted on which candidates to invite to a panel. Any candidate who got more than 50 percent approval was invited to participate, and the proceedings were broadcast on Facebook Live and posted to Youtube. This panel, along with the questionnaire responses, informed a final, membership-wide vote of approval, yielding five candidates with the requisite 67 percent-plus support to receive endorsement. In alphabetical order: incumbents Dennis Carlone, Jan Devereux and challengers Sumbul Siddiqui, Vatsady Sivongxay and Quinton Zondervan.

All five candidates refuse donations from special interests, in line with an important foundation of Sanders’ campaign.

To call this careful and thorough process “not transparent and open,” as its critics do, is a complete distortion of the truth. We went further than many organizations to make our endorsement process clear and democratic. By comparison, some organizations base their endorsements solely on questionnaires or panels, with decisions made by executive boards behind closed doors. Some don’t even have a process and choose candidates based on their past record or stated platform.

The letter-writers worry that if Sanders relies on the local chapter of Our Revolution to choose candidates, he will “lose control of the process” and expose himself to the risk that the “local organization will nominate candidates based on their agenda,” not his. This line of reasoning demonstrates a fundamental lack of understanding of the local grassroots movement Sanders is trying to inspire.

To many of his supporters, Sanders offers an alternative to the traditional top-down nature of political organizing. By empowering people at the grassroots, he has inspired a movement of progressive activists to engage in the political system in a way that few other elected officials have. His endorsement of these five candidates reminds voters that elections, specifically local elections, matter.

In today’s political climate, where progressive values are threatened daily on the national level, the responsibility shifts to local leaders to enact change and protect our future. If Sanders can engage more people in local politics, then this is, in fact, exactly what democracy looks like.