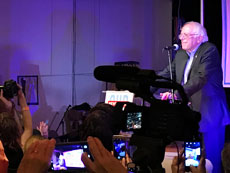 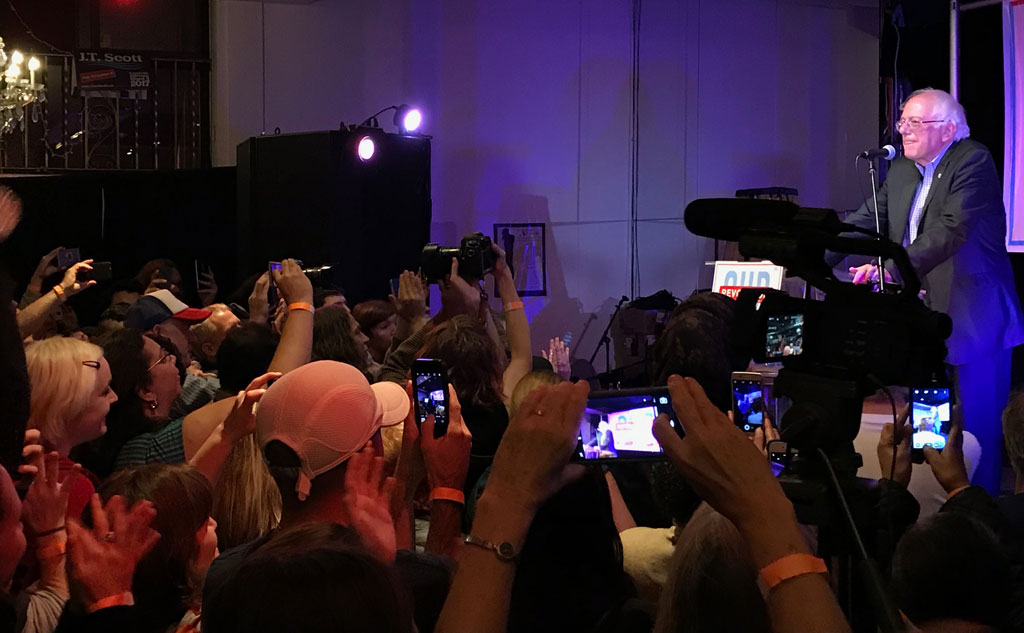 U.S. Sen. Bernie Sanders rallied support for progressive candidates running for City Council, the Board of Alderman and school district leadership in Somerville and Cambridge on Monday, speaking to a packed house at the Once Somerville club.

“What today is about is saying at the local level, at the state level, we will demand government that works for all of us, not just for the 1 Percent,” Sanders said during a half-hour speech to a packed house. 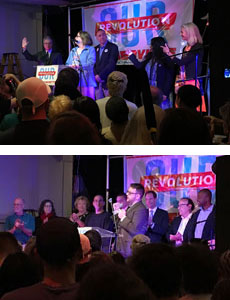 Our Revolution-endorsed candidates from Somerville and Cambridge get their time on stage at the Once Somerville club.

Speaking against an increasingly oligarchical government funded by the super rich, such as the Koch brothers, Sanders said local races were key to reclaiming American democracy.

“The local level, more than any other, involves people” in the political process and builds change from the bottom up, he said. “Involving people and revitalizing American democracy, that’s what you’re doing today.”

Sanders’ visit highlighted some of the more than 60 candidates endorsed nationwide for elections in November by Our Revolution, the political group spun off of his own campaign for president in 2016. There are a half-dozen candidates in Cambridge – five endorsed by the local group and national, one solely nationally endorsed candidate, radio talk show host Jeff Santos – and a dozen in Somerville, including three School Committee candidates.

“Local Our Revolution groups in Somerville and Cambridge have been organizing for months to continue the political revolution we started with the Sanders’ campaign,” said union organizer and Our Revolution Somerville member Rand Wilson. “The candidates – both incumbents and challengers – have embraced the political transformation needed to fix our broken political system and our rigged economy. With new voices and new perspectives, we are asking our municipal governments to lead the way by improving life for working people and stemming the tide of gross inequality.”

Fewer than 400 were allowed into the venue, an organizer said, which left more than 100 disappointed people outside. Among the crowd allowed in were locals not just from Our Revolution’s local chapter, but from government, including Somerville’s legislative delegation, Cambridge city councillor Nadeem Mazen, School Committee member (and council candidate) Richard Harding and former city councillor and mayor Ken Reeves. “I’ve been a Bernie guy since the beginning, and now you see why,” Reeves said. The event was emceed by state Rep. Mike Connolly.

Not everyone was aboard. A letter dated Saturday and signed by nearly 30 Cantabrigians rebuked Sanders and Our Revolution for weighing in “in a nonpartisan City Council race with 26 candidates, most of whom are equally progressive.”

“How – and why? – does a national leader like you choose between these candidates?” asked the letter, signed by a group including state Rep. Marjorie Decker, former state Rep. Alice Wolf, former city councillor  and activists such as Mo Barbosa and and Jesse Kanson-Benanov, a leader of the pro-development group A Better Cambridge.

The Cambridge endorsements, mainly made locally by the Cambridge chapter of Our Revolution, were identical with those of the Cambridge Residents Alliance, a group typically at odds with A Better Cambridge. But the local nature of five of the six Our Revolution endorsements was not a comfort to the letter writers. “If the answer is that you rely on the local Our Revolution organization to nominate candidates for endorsement, you lose control of the process they use and expose yourself to the risk that the local organization will nominate candidates based on their agenda and not yours,” the letter says. “Whether you intended it or not, the result of this endorsement is that you appear to have aligned yourself with one particular side of how the city should deal with the need to build housing in the Greater Boston region … This is not something in the Our Revolution platform.”

The letter drew attention from Politico, which noted its charge that the endorsements “divides, rather than unites, progressives here.”

“Our Revolution is excited for Sen. Sanders to support the work of our local groups in Massachusetts,” Turner said. “Our organization is committed to supporting local elections because local policymakers are directly involved in the lives of the communities they serve. By electing progressives to local office, we can build a country that is responsive to the needs of the people, not just the very wealthy.”

The event began with bluegrass (Sanders-endorsed, noted the performers, The Splinters) at 9:30 a.m. as hundreds of local voters and Sanders fans lined up along Highland Avenue in Somerville. 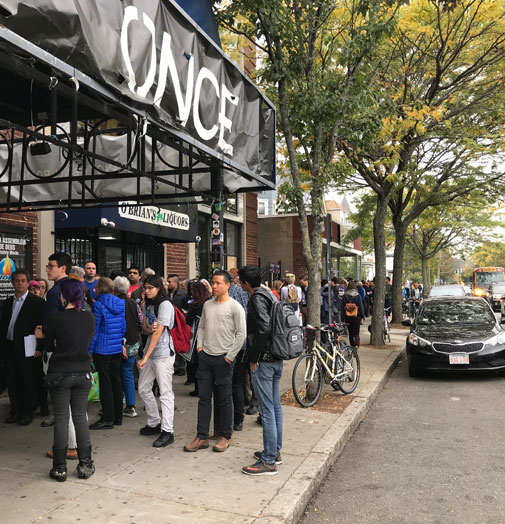 The line to get into Once Somerville stretched for blocks Monday morning.

Progressive candidates are often challenged on their legitimacy, Sanders said, facing questions of “who the hell do you think you are?”

“Let me tell you a secret,” said Sanders, who began his political career in local government in Burlington, Vt. “I work in Washington, D.C., and if you think you can’t get in involved in public life, just look at some of my colleagues in the U.S. Senate.”