CRLS adds $7,000 to Puerto Rico funds with ‘West Side Story’ as crisis continues 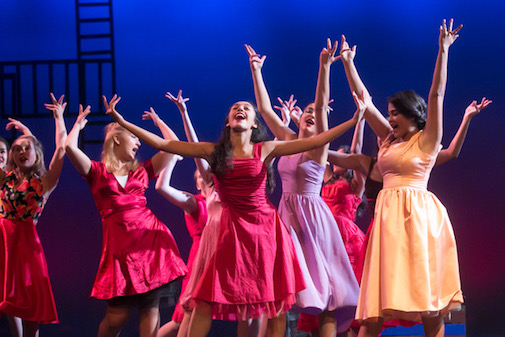 CRLS adds $7,000 to Puerto Rico funds with ‘West Side Story’ as crisis continues

Cambridge Rindge and Latin School’s recent production of “West Side Story” not only wowed packed audiences for its five performances, it also helped to raise more than $7,000 to help support Puerto Rico.

The 1957 musical “West Side Story” is a Romeo and Juliet tale with music by Leonard Bernstein and lyrics by Stephen Sondheim set in New York’s Upper West Side, focused on gang rivalries between the all-white Jets and the Puerto Rican Sharks – part of a diaspora from the island much as Cambridge has been for more than six decades.

With the destruction of Puerto Rico from September’s Hurricane Maria fresh on their minds, students wanted to find a way to do something tangible with their deepening cultural connection to the island.

The decision to raise funds for Puerto Rico was a natural, and seemed to come from all corners of the cast and crew. “‘West Side Story’ encompasses Puerto Rico and the American melting-pot culture and highlights how we need to be there for each other in times of need,” the fundraising page said. “We must listen to one of the lessons of the story we tell.”

Senior Mercedes Sapuppo created the page, which has a link for ongoing donations. She remembers the show’s director, Monica Murray, talking with a few students from the school’s Improv Club about how the show might fundraise. Sapuppo, president of the club – for which Murray is also faculty adviser – took on the project.

Members brainstormed the best way to raise funds and decided on having cast members go through the audience after performances with mason jars to collect cash. After each final curtain call, the lights came up, and cast member Elaina Wolfson spoke to the audience about how Puerto Rico has come to mean so much to the entire crew.

The online link will continue for the foreseeable future, but the vast majority of the $7,000 raised to date were from the mason jars at the five performances.

Having the whole cast involved – at performances and outside the theater – was “essential” to the project’s success,” Sapuppo said.

The money is going to the Hispanic Federation, whose Unidos Disaster Relief and Recovery Program is leading efforts to bring support to Puerto Rico.

“We did a lot of research on where the funds should go,” Sapuppo said, “and ended up deciding on the Hispanic Federation because Lin-Manuel Miranda uses that fund for his own Hurricane Maria fundraising.” Their research, combined with the endorsement of Puerto Rican native Miranda, creator of the Broadway phenomenon “Hamilton,” made them feel the Federation was “trustworthy.” “It was also a nice connection because this was a theater production, and CRLS put on [Miranda’s] ‘In the Heights’ last year,” she said.

They expected to send their first check to the Hispanic Federation last week.

Monica Murray, director of the “West Side Story” production and CRLS theater teacher, won a mayor’s Luminary Award on Monday in honor of her students’ fundraising.

The city has been fundraising as well, through the Mayor’s Disaster Relief Fund, and as of late October had also gathered some 15,000 pounds of supplies to send over to the island from a drive held Oct. 21-22, said Adam Patten, the mayor’s director of outreach. Getting the supplies to Puerto Rico by barge was to be facilitated by a charitable group in Dorchester.

The last step of getting goods from docks in Guaynabo to four cities with special ties to Cambridge was being figured out mainly by members of the extended Cambridge community who were there, including by family of Dennis Benzan, the former vice mayor who owns La Fabrica restaurant in Central Square, Patten said.

Cambridge has a long history of Puerto Ricans from Coamo, Jayuya, Orocovis and Salinas making Cambridge their home, but they are small, rural communities in the southern part of the island – an area identified as among the hardest to reach.

The four communities were grateful for Cambridge’s help and have signaled interest in a more formal arrangement after the aid, but communications were so terrible at the time that a series of formal agreements had to be set aside until after the crisis, Patten said. 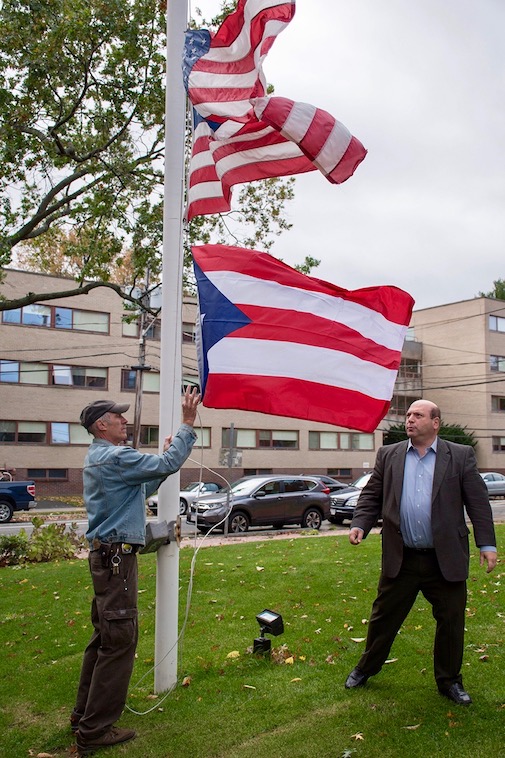 Others in the city have also vowed not to forget Puerto Rico. The island’s flag was raised Oct. 30 on the Lesley University campus with a vow it would fly until 90 percent of Puerto Rico’s residents have water, electricity and reliable communication restored – a figure still not reached more than two months later.

In what’s considered the longest and largest power outage in modern U.S. history, the U.S. Army Corps of Engineers expects that 75 percent of the island will have power back by the end of January.

“It’s up to us to keep these voices alive. We cannot sit back and forget what’s going on,” said Lesley University professor emerita Vivian Carlo, a member of the Puerto Rican diaspora who lives in Boston. She spoke during a brief ceremony by the school’s Doble Quad.

Lesley students and employees have also helped collect money and needed items and organized further fundraisers for support and resources for Puerto Rico and Texas, school officials said. The university said it was is organizing educational forums about the relationship between the United States and Puerto Rico.

“We raise and fly the flag of Puerto Rico as a sign of solidarity with our brothers and sisters … who are struggling to recover, a reminder to keep them firmly in mind in the months ahead, and as a call to action within our community to celebrate and support them,” said  Lesley’s president, Jeff Weiss. “We fully know that a large part of this tragedy has nothing to do with mother nature and all to do with a lack of unification between the United States and Puerto Rico.”

This post was updated Dec. 17, 2017, to revise an incorrect reference to a mayor’s Luminary award.