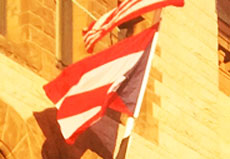 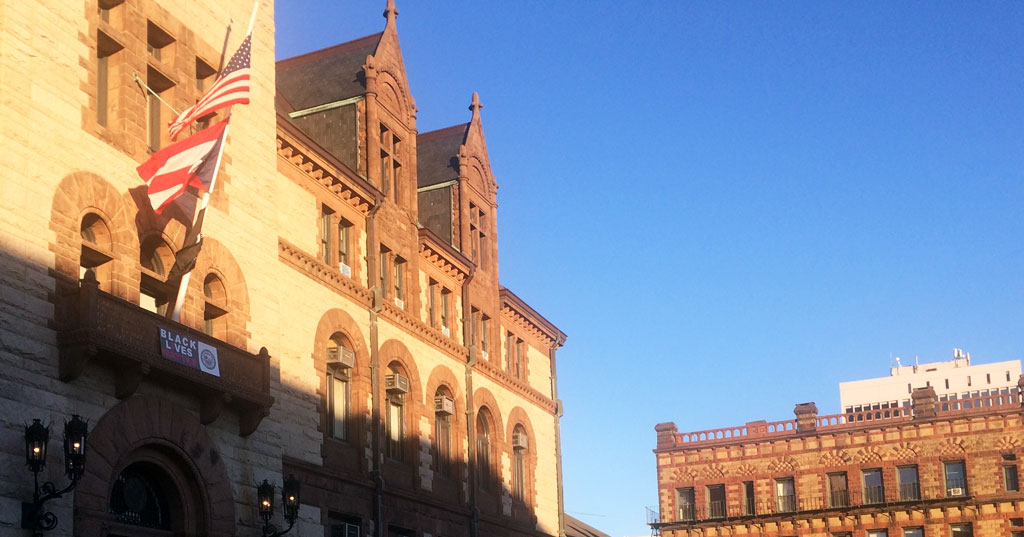 The Puerto Rican flag flies above Cambridge City Hall on Monday, after a ceremony expressing support for people suffering on the U.S. territory after two hurricanes. (Photo: Marc Levy)

With Puerto Rico in ongoing crisis from natural disasters and the federal government providing slow and grudging assistance, Cambridge – considered a gateway for migrants from the island for more than six decades – is stepping up. A policy order approved unanimously Monday by the City Council creates a commission to identify long-term aid possibilities and offers a sister city relationship to four communities on the U.S. territory in the northeast Caribbean.

The communities are Coamo, Orocovis, Salinas and Jayuya – small cities where the most Puerto Rican Cantabrigians have roots. 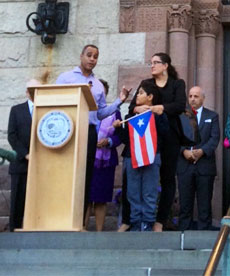 Dennis Benzan speaks Monday at a ceremony in front of Cambridge City Hall. Click the image to see the source of the photo, a tweet by Nicole de Paz.)

Passage of the policy order followed a pre-meeting ceremony in front of City Hall where the Puerto Rican flag was raised to accompany a U.S. flag.

Officials’ speeches said they had looked for the proper response in the face of damage to Puerto Rico from hurricanes Irma and Maria.

“Our natural instinct is to hug our loved ones a little tighter,” Mayor E. Denise Simmons said. “After the initial shock begins to fade, we start to ask ourselves one important question: What can we do? In the aftermath of so many tragedies, we have to come together, and make it a practice to come together. And that’s what we do here in Cambridge. We lock arms and make a human chain and say ‘We are going to go through this together.’”

Former vice mayor Dennis Benzan, now the proprietor at La Fabrica Central restaurant in Central Square, which serves Caribbean food by a Puerto Rican chef, was helping craft the framework for the council’s Puerto Rico Commission and sister city effort, Simmons said. The order looks beyond the natural disasters to the systemic weaknesses forced upon the island by its peculiar status as part of the United States – including going unrepresented in Congress, despite holding 3.4 million Americans.

More than a dozen people at the night’s council meeting spoke in support of the commission and sister city status, including Melissa Colon, a Cantabrigian of Puerto Rican ancestry who said she was representing immigrant parents who were both frail and mourning. “We have lost two members of our family,” Colon said. “Our suffering is not ours alone. It is of our people.”

“We really need Cambridge to step up as it always has and be a leader,” she said, “developing strategic, long-term, sustainable plans … and galvanize the human capital that exists here and help people in need. And I believe that we will.”