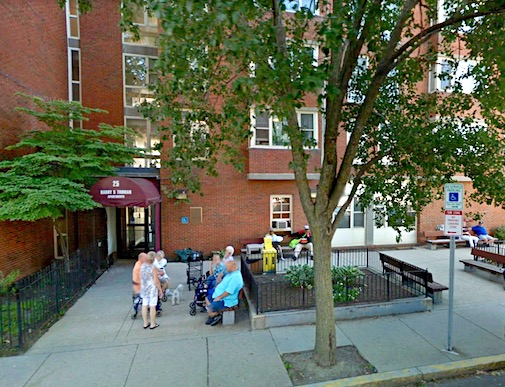 The Harry S. Truman Apartments at 25 8th St., East Cambridge is slated for its first rehab since 2003. (Photo: Google)

The tax bill approved by Congress on Wednesday preserves a crucial funding source for low-income housing, bringing relief to officials at the Cambridge Housing Authority. They had warned that the agency’s plan to finish rehabilitating hundreds of deteriorating public housing units was threatened by a U.S. House of Representatives bid to end the funding mechanism.

The agency’s executive director, Michael Johnston, wasn’t ecstatic about the vote, calling it “somewhat good news” at a meeting of the authority’s board of commissioners. “Some is better than none,” he said, adding that the agency still faces challenges in finishing the projects.

Nevertheless, he said, “we are going to complete the balance of the [public housing] portfolio. That’s our commitment.”

At stake in the tax bill were tax-exempt bonds that enable developers of affordable housing to get federal low-income housing tax credits, which they can sell to big banks and other investors to help pay for their projects. The version of the bill approved by the U.S. House of Representatives eliminated the bonds – and therefore most of the tax credits; the U.S. Senate version kept the bonds. In the final bill, the Senate’s version prevailed on the tax-exempt bond issue.

The agency is revamping most of its housing in a $382 million project undertaken mainly under the federal Rental Assistance Demonstration program. RAD relies heavily on private investors to fund construction and required the authority to transfer its public housing stock to private ownership, at least on paper. The agency will continue to manage the housing and has promised tenants that they won’t lose protections and that the housing will remain low-income.

The agency has said that, with federal funding shrinking, its housing was in danger of deteriorating to the point where it couldn’t be occupied.

The first phase of RAD, with five developments housing 1,150 households, began about three years ago and is almost complete. Phase 2 will rehabilitate 279 units in eight developments and additional scattered housing sites. The agency has also federal approval to revamp five developments under a different federal program, and is awaiting approval for a sixth site; all require bonds and tax credits. Those projects have a total of 1,003 apartments. In addition, the agency demolished its state-funded Jefferson Park State development in North Cambridge and is building new housing on the site, with state support.

Although the tax reform legislation saved the bonds and tax credits, it makes the credits less valuable; the law also reduces the corporate income tax rate to 21 percent from 35 percent, Johnston said. One expert, accounting firm and consultant Novogradac & Co., has estimated that the value would shrink 14 percent. This together with other provisions in the legislation would cut the supply of affordable housing nationwide by about 232,000 units over the next 10 years, Novogradac predicted.

Another potential roadblock for the Cambridge public housing plan is the state’s limited supply of tax-exempt bonds entitling developers to the tax credits. Last year the reconstruction of one development, the Manning Apartments in Central Square, almost foundered because there were not enough bonds. It was saved when the agency and state agreed to have the bonds issued over two years.

Agency director of planning and development Margaret Moran remained optimistic. “We’ll have to work a bit harder to close the funding gap,” she said, referring to reduced value of the low-income housing tax credits.