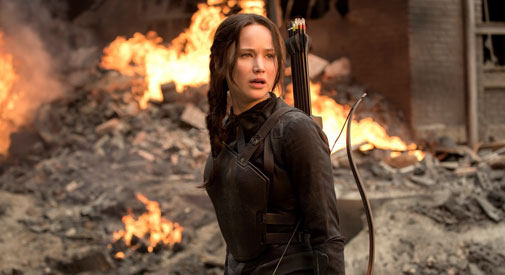 Given what we’ve come to in the past year – a country divided on race, politics and class, with terms such as “fascist” and “fake news” bandied about on a daily basis – a “This Week in Dystopia” repertory series at The Brattle Theatre feels timely. A co-presentation with the Ash Center for Democratic Governance and Innovation at Harvard’s Kennedy School, the series kicks off Thursday with a screening of Kathryn Bigelow’s “Strange Days” (1995) and concludes Sunday with “The Hunger Games” (2012).

Christopher Robichaud, a lecturer in ethics and public policy at the Kennedy School and producer of the similarly named podcast, “This Week in Dystopia,” is one of the forces behind the series. He called Donald Trump’s election and his style of governance “partly” behind the “Utopia and Dystopia in Fiction and Philosophy” class he taught in 2016 and launch of the podcast last year, but also cited the recent rise of fascist groups, not just in the United States but around the globe – from Breitbart to Brexit.

Film and literature have long been powerful and engaging mediums to critique and reflect oppressive social structures and prognosticate potential unhappy things to come (hello, George Orwell). In that regard Robichaud wants to examine the now, and tomorrow.

The series should spark a dialogue on “where we are at with our values, and where we are going,” Robichaud said. Each film will have a conversational component to engage the audience, with details still being finalized by staff at the Ash Center. For Mike Judges’s “Idiocracy” (2006), which pairs with “Strange Days” on Thursday, screenwriter Etan Cohen is slated to chime in with Robichaud.

The slate is an olio of recent popular flicks, classics and a few rediscoveries. The opening night tandem fall into that final category – both received tepid responses commercially and critically at the time of their release, but their sociopolitical themes now feel more germane, especially Bigelow’s Y2K thriller revolving around a black market dealer (Ralph Fiennes) hawking the memories and emotions of others. The film, written by “Terminator” director James Cameron, boasted a sharp, imaginative spin on the near future (now the near past) and tackled matters of technology and identity (theft) that in 1995 may have seemed far out but are hauntingly on target today. “Idiocracy” is, as might be expected from the creator of “Beavis and Butthead,” a lighter satirical prognostication with dark roots (think “Downsizing”) about a cryogenically frozen vet (Luke Wilson) whose Rip Van Winkle awakening occurs some 500 years in the future.

“Children of Men” (2006), the near-future thriller directed by Alfonso Cuarón (“Gravity”) in which a woman hasn’t birthed a child in some 20 years, arguably falls into the classics category with Stanley Kubrick’s “A Clockwork Orange” (1971) – which needs no words – and Fritz Lang’s timeless sci-fi spin on an industrialist society “Metropolis” (1927), where oppressed proletariats are rhythmically marching sheep. The series’ most mainstream and popular offerings may be on the concluding night: the wildly popular YA lit series-turned-film franchise built around Jennifer Lawrence and bravura performances from Stanley Tucci and Philip Seymour Hoffman; and the 1990 film adaptation of Margaret Atwood’s novel “The Handmaiden’s Tale,” which also deals with futuristic matters of scarce fertility and class, again at the fore in the new Netflix series starring Elizabeth Moss (“Mad Men”).

One of the things Robichaud aims to discuss in the series is how democracies die. But in conversation, he is careful to draw the line between post-apocalyptic and dystopian visions of our future. “Post-apocalyptic is generally the fall of civilization, where the rules and structure of society have been stripped away,” he said. “Dystopia is more the ‘scary’ government exercising coercive power over others.”

Which brings us back to Trump, and our current state of fear and division.

Side note: If, as a burgeoning cinephile, you’re apprehensive about silent films, this series is for you. Beyond Chaplin and Keaton, or Eisenstein’s “Battleship Potemkin,” there’s none better than Lang’s dauntingly staged “Metropolis” to get your feet wet.