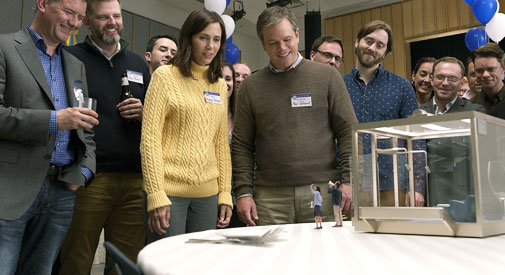 You know that viral tiny house movement where folk show off cozy, cute mini abodes with all the home amenities amazingly in just 250 square feet? You may even have romanticized about trading your palatial digs for the micro version and living more simply. Nice idea, but not many of us would actually do it – we’re too attached to our big, consumptive lives measuring our worth in square feet and wallet size. But what if you could cut down on the consumptive part, stretch your dollar tenfold and live larger than if you won the Powerball jackpot? That’s somewhat the idea behind Alexander Payne’s “Downsizing” where, in the near future, dwindling resources reaching “Soylent Green” critical levels has triggered a worldwide movement to conserve and cut back without sacrificing the lush life. 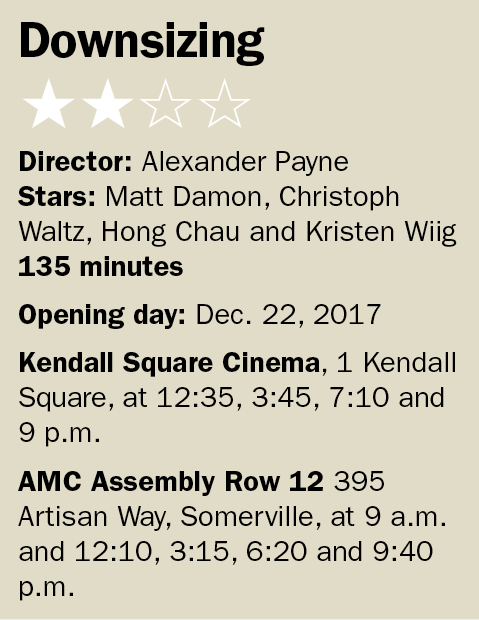 If that sounds like a win-win, it is – except that to do so you must get shrunk down to five inches and live in domed enclaves full of mini mansions, rolling green golf courses and swank nightclubs and eateries. Once done, your $50-a-week food budget can cover you for half a year. It’s a choice, and the world is roughly split down the middle between bigs and littles. Occupational therapist Paul Safrenek (local boy Matt Damon, more in the news these days for his backfiring #MeToo opines) and his wife, Audrey (Kristen Wiig, in the film far too little) decide the only way to achieve the house of their dreams is to go small. The medical process isn’t so easy either, and god forbid you leave dental implants in during the process. The matter for Paul becomes a quest for self-discovery in a new land after his wife (genders separate as they do the process en masse and in the bare) balks in the eleventh hour before shrinkage and hops a jet elsewhere.

All alone in “Leisureland,” Paul has a spacious condo in a lux mansion. As he tried to pick up the pieces of his tiny new life he encounters a rich potpourri of personality that was never afforded him in his sleepy big life. The funnest is the orgy-minded party hound upstairs named Dusan (Christoph Waltz, a breath of fresh air as the gonzo, high-energy black market opportunist) and Ngoc Lan Tran (Hong Chau) as a famous Vietnamese dissident, imprisoned and shrunk down for her protests against her homeland, now turned cleaning woman with a poorly fitting prosthetic leg (nothing a good occupational therapist can’t help with). Chau (“Big Little Lies”) is fantastic in the role, fiery, determined, caring and vulnerable – if you see the movie you’ll know why she’s up for a Golden Globe and will be gracing your big screen more in the near future. What’s not so fantastic is the dangerous treading on Asian stereotype, especially the broken English played to near hyperbole. The performance is so endearing and driven by soul and dark humor, however, it almost makes amends – then there’s Ngoc lan’s eight definitions of “a fuck” in America. I found it a bravura moment; others may feel otherwise.

Payne and his screenwriter, Jim Taylor, who’ve nailed it before with the wacky wine comedy “Sideways” (2004) and dark political romp “Election” (1999), feel a bit out of focus and adrift in concocting the near-futurescape. How the bigger world is reacting to the movement politically or if crows and cats are picking off Lilliputians is so far off the corners of the screen, it becomes a hard sell. The human drama of Paul and Ngoc Tran’s journeys is robust and meaty enough for the most, but overall “Downsizing” is a skewering farce the way “Suburbicon” aimed to be – Damon being the common factor here – and it similarly gets lost in its own ambition and smugness. The end of the film too feels a bit rushed and tacked on as we jump into a pilgrimage to the original mini commune in Norway and the sudden proclamation that the end of the world is just around the bend of the river.

“Downsizing” is a far more accomplished effort than “Suburbicon,” and an interesting conceit buoyed by social and political exploration, it’s just too bad in its rush to get small and cheeky, it didn’t take stock more globally.