‘Gravity’: Amazing visuals, hairbreadth escapes but a story that never quite soars 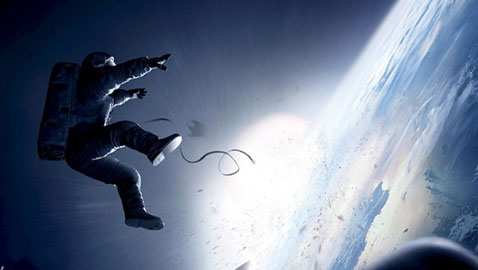 ‘Gravity’: Amazing visuals, hairbreadth escapes but a story that never quite soars

Some might wonder how the director of “Y Tu Mamá También” and “Great Expectations” (bet you forgot about that 1998 foray starring Gwyneth Paltrow and Ethan Hawke) arrived at a space odyssey such as this. Likely the international success of “Y Tu Mamá También” opened a few doors for director Alfonso Cuarón, and his follow-on, “Harry Potter and the Prisoner of Azkaban,” which was the best segment of the overheated wizard series, enabled the Latin auteur to play freely with special FX and blockbuster-aimed gadgetry. Two films later he capitalized on that and wowed critics and audiences alike with the bleak future-scape thriller, “Children of Men,” registering perhaps the first perfect fusion of grand vision and epic scale in the new world order of digital filmmaking. 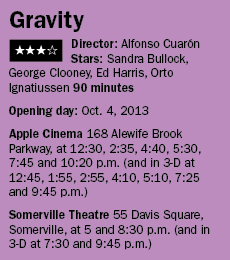 Development of “Gravity” began shortly after “Children of Men” (in 2006) and took nearly six years to complete because of the need to invent technology to make the film possible and the degree of complexity and time required for some of the special effects, which are far beyond typical green-screen chicanery. For what’s onscreen and the $80 million budget spent, it looks like every minute and every penny was poured into every scene. The film is nothing short of a miracle in filmmaking and should be held as such.

As a story, however, that’s a different matter.

What goes on in “Gravity” is pretty straight up; three astronauts from the space shuttle Explorer go out on a spacewalk to repair the Hubble telescope; disaster strikes, and the rest of the film is about the survivors trying to get to a safe place. The catastrophe, a debris storm from a Russian missile strike that took out a derelict satellite, comes shortly after the films begins. Jocular banter and the mission at hand are replaced with an urgency to get into the shuttle and out of harm’s way, but they waver for a moment and it’s too late. Everyone inside the shuttle dies from exposure, while one of the three out in space has his helmet and cranium pierced by a shard of shrapnel that passes through with the ease of a hot knife through room-temperature butter, leaving only newbie science officer Ryan Stone (Sandra Bullock) and grizzled vet Matt Kowalski (George Clooney) alive and adrift in space. They’re apart from each other and the destroyed shuttle, and the prospects for going on look quite dim. It’s a harrowing moment of realization, like becoming lost in a desert or alone in a raft at sea with no land in sight (that story forthcoming in “All is Lost”) – and space is an even more vast and unfriendly expanse of nothingness.

Throughout all this Kowalski remains exceptionally calm, and in the eerie silence of space, using old-school navigation techniques, limited communication devices and a lot of luck, he finds Stone, who’s been hurtling around out of control. He tethers her to his back (Kowalski is the only one with a jetpack) and they set off to make their way to the International Space Station, hoping their jet fuel and oxygen don’t run out first.

There’s more to the plot of “Gravity” (the International Space Station is a whole ’nother chapter of epic tribulation), but to articulate any further would be to do the film and the experience a disservice. How Cuarón so seamlessly created zero gravity and rendered astronauts spinning out of control at thousands of miles per hour with such realism boggles the mind. The feast of visual spectacular wows – each one outdoing the last – drives the film as much as the hanging-by-a-thread survival yarn.

And if being lost in space without a ship seems like a pretty major problem, the tethered pair has also lost contact with Earth, which I guess cuts out any expository banter and insight from down below – and what exactly would those guys be able to do in any case?

Astoundingly, the voice of Houston control is none other than Ed Harris, who played the effusive and resourceful control manager in Ron Howard’s “Apollo 13.” That movie, based on a historical occurrence foretold eerily by the 1969 movie “Marooned,” dealt with the rescue of oxygen-starved astronauts in space. In it, the players on Earth and above had soul, and their story unfurled with fragility, death looming at every turn. In “Gravity” the two survivors overcome such insurmountable odds so many times that you wonder if James Bond might not be a tad jealous.

We get a bit of backstory too, with Clooney his usual comfortable, wry everyman and Bullock’s Stone having a bit more going on. But it feels like artifice so Cuarón can do mesmerizing stunts such as have a camera follow Stone as she careers aimlessly about and we watch her spin from afar. In the background we can see Earth, then the deep dark galaxy, then the broken carcass of the shuttle, and it all repeats over and over as the focus slowly moves in on Stone’s face – then we are in her helmet looking out, and we see the whole dizzy spin cycle from her POV.

It’s an amazing feat of filmmaking, but where Cuarón should have applied similar elbow grease was on the script he co-wrote with his son, Jonás. Sure, the characters have the mettle to be up there and their cool perseverance under pressure is beyond enviable, but what else?

What Cuarón missed that Howard nailed in “Apollo 13” (where we already know the conclusion) was the connection between humans doing something heroic that puts themselves at risk for others. There’s some of that altruistic spirit in “Gravity” too, but just a sprinkling.

So if in space you do something monumental and no one is there to witness or benefit from it, does it matter? Probably not, but even if you view “Gravity” as a vacuous fire drill, that harrowing hollow hell-ride is one breathtaking endeavor.