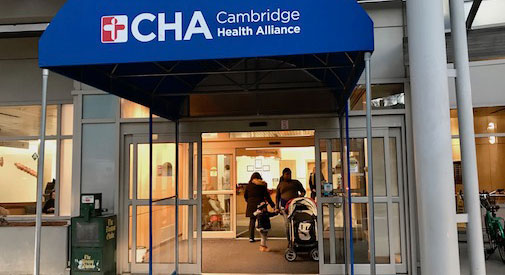 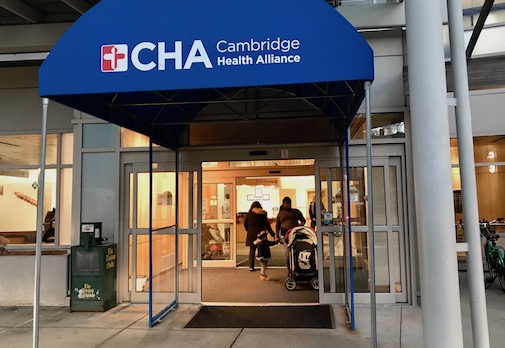 Hoping to prevent unnecessary cases of breast and cervical cancer, doctors at Cambridge Health Alliance are offering an unusual screening program next month to women who aren’t getting cancer tests for reasons such as lack of insurance, cultural barriers, unavailable child care and transportation. 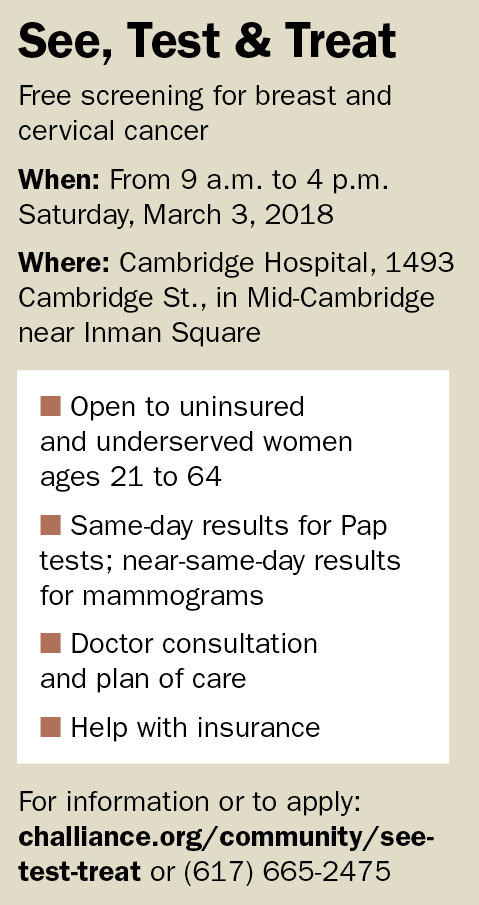 The all-day program, on March 3 at Cambridge Hospital, will provide uninsured or “underserved” women from 21 to 64 with free mammograms and Pap smears, and much more: quick results, help getting insurance coverage, foreign-language interpreters, babysitting, transportation, a healthy lunch and a meeting with a doctor to discuss results and plan treatment if tests show a problem.

The Alliance expects to pre-register 60 women for the event and can accept up to 10 walk-in patients, said Dr. Rebecca Osgood, chief of pathology and a co-organizer of the program. About 109 employees will provide services, and all participating professionals are volunteering, she said.

“No woman should die of a cancer that’s preventable,” Osgood said.

It might seem surprising that some women aren’t getting tested in a state where at least 94 percent of residents have health insurance. State figures show 80 to 90 percent of women in Cambridge, Somerville and the northern suburbs where the Alliance’s target population lives get mammograms and Pap smears. But Alliance researchers found pockets of women who weren’t getting the breast and cervical cancer tests: Muslim women in Malden, Revere, Chelsea, Winthrop and Everett; homeless women; those being treated for addiction; and “new arrivals” living in public housing, Osgood said.

“That is our target population,” program coordinator Megan Meany said. Members of the CHA Volunteer Health Advisors, a group of community members, often immigrants themselves, who help the Alliance connect with hard-to-reach communities, are recruiting in churches and mosques, Osgood said.  Other volunteers are talking to women and posting fliers in public housing developments.

The need for help has surprised Osgood. “I did not think there would be anyone out there who didn’t have health insurance,” she said. “But of the people who have signed up [so far], 50 percent had no insurance.”

The Cambridge event, called See, Test & Treat, is part of a nationwide program sponsored by the Foundation of the College of American Pathologists. (Pathologists are the specialists who interpret Pap smear tests). Grants from the foundation are helping to pay for 14 screening programs this year at hospitals around the country. The Alliance and Lawrence General Hospital are the only two in Massachusetts; the Lawrence See, Test & Treat screening will be held Oct. 10.

All the screening events include extras intended to eliminate barriers to testing, including same-day or near-same-day test results, child care, health education and immediate treatment plans. The national pathologists’ group began the program in 2001 at the Standing Rock Reservation in Rosebud, South Dakota. The first hospital-based event was in 2010 at Tufts Medical Center in Boston, according to a report on See,Test & Treat in the Archives of Laboratory Medicine and Pathology by Tufts physicians who ran the screenings. Tufts offered the program for the next five years, targeting mainly Asian women; many participants, but not all, lived in Chinatown, where the hospital is based.

According to the report, 31 percent of women who got Pap smear tests over the five-year period had abnormal results, and 12 percent of mammograms were abnormal. Women were also tested for hepatitis B, which is endemic in Asian populations and for human papillomavirus infection, which can cause cancer; 15 percent of the HPV tests were positive.

Such findings reinforce CHA doctors’ efforts to get more women tested and their willingness to go to unusual lengths. For example, undocumented immigrants have little if any access to health insurance, but financial services staff from the Alliance have pledged to find help for everyone, Osgood said. The Alliance participates in Health Safety Net, one of the few state-sponsored programs that helps needy state residents, including undocumented immigrants, pay medical bills, with some restrictions.

CHA is also running shuttle buses from Alliance clinics in the northern suburbs to Cambridge Hospital to bring women to the screening. And the Alliance has arranged with Uber to offer discounted rides to the hospital; the shuttle buses cannot carry child car seats, but the Uber vehicles can, Osgood said.

“We are very excited to be doing this; we want to help women get this care,” she said. “This fits so well with the CHA mission which is to improve the health of our communities … We all went into health care to help people and this is one day when we can all band together.”