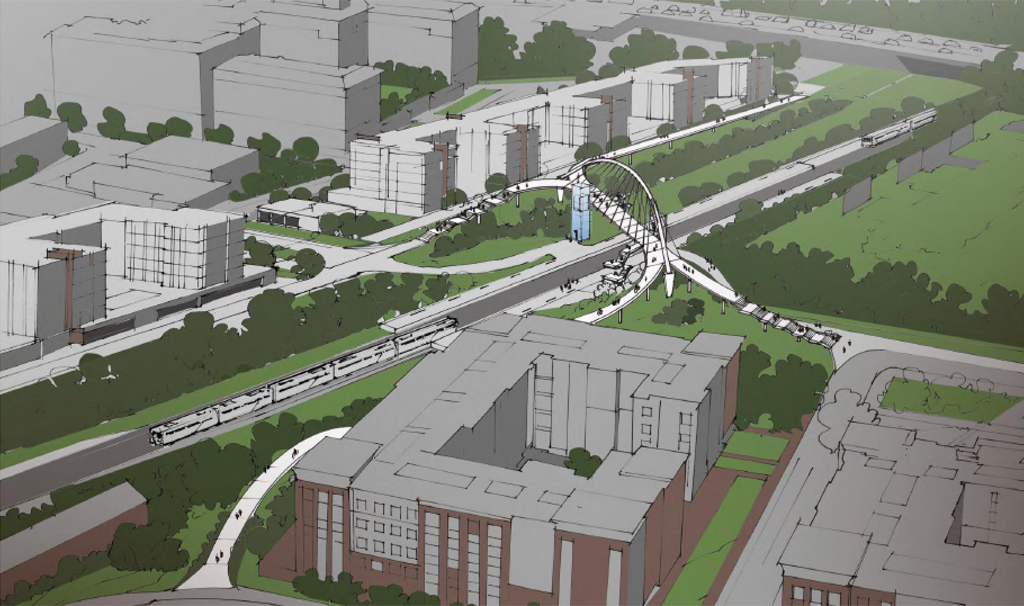 A possible bridge type and layout connecting Alewife, seen in a December 2015 city update on the project. Click to enlarge.

Though not quite agreeing to build a long-talked-about bridge over Alewife train tracks, City Manager Louis A. DePasquale on Monday said he’d just completed a meeting that suggested a path forward for the project “that at least makes the bridge much more of a factor than I have committed to in the past.”

“I don’t want to tell you that we’re funding the bridge immediately, but we have had some positive conversations that I think we’ll be moving forward,” DePasquale told city councillors at their meeting. “We’re still finalizing some thoughts and ideas, but it certainly will appear soon as a concept on how we think we can do something.”

The idea is to connect the area known as the Triangle, which includes the Alewife red line T stop, with the industrial area to the south known as the Quadrangle, helping workers walk or bike more efficiently to jobs. As the area is laid out now, workers have to take Alewife Brook Parkway all the south to Concord Avenue before they can go north again into the Quadrangle. A bridge could halve that distance.

Plans to bridge the commuter rail tracks running through the Alewife neighborhood go back at least to a 1979 revitalization study known as the “Fish Book” that envisioned a four-lane Alewife Boulevard. There was revived interest in 2013 that encouraged city planners to shoot – unsuccessfully – for a federal grant to update the proposal, and then as the citywide Envision master plan process got underway. Alewife, which has seen a recent explosion in development and population and an exacerbation of traffic issues, was an early focus for the master plan process.

The council order heard Monday supported an Envision working group calling for a pedestrian/bicycle bridge and commuter rail stop with shuttles to and from the T stop, which would need the state as an active development partner and puts the project far beyond the $20 million-plus estimate heard in 2013.

More than 15 residents, including members of the Envision working group, came out to push for a bridge – with many expressing bewilderment and frustration over why the project had been such a hard sell among top city officials.

The clash emerged into public in November, when Utile, the company leading the Envision process, gave a presentation about Alewife in which the bridge concept championed by its own working group was nowhere to be found.

“I’m a bit mystified by the city’s intentions for the Envision Cambridge process and the Alewife Working Group’s purpose,” said Eric Grunebaum, a member of the group. “It defies common sense to have a major planning process with minimal efforts to deal with long-standing and growing traffic problems and which does not incorporate significant transit improvements – virtually ignoring the views of the appointed working group. It seems to be an almost willful rejection of good planning.”

Positive transportation numbers and a look at the booming area’s contribution to the city tax base made persuasive arguments as well, DePasquale suggested. His good news was prompted by vice mayor Jan Devereux noting that one of the city’s credit rating agencies had identified growth in Alewife as a factor in its granting of another top score.

“Unlocking the potential in Alewife is very much in their consideration, and I think we’ve all identified that this bridge is part of that,” Devereux said.

The city manager’s assurances were welcomed, despite the lack of specifics. “It has been a disappointment not to see the challenges [of Alewife connectivity] squarely confronted and taken up,” Devereux said. “Just six months ago the bridge had kind of been erased from the plans, then it was added as a long-term improvement. We’re definitely moving in the right direction.”

“This bridge and a commuter rail station are quite literally the missing links to unlocking the value and the livability for this area,” she said.

The policy order, by Devereux with councillors Sumbul Siddiqui, Craig Kelley and Dennis Carlone, asks for a report back at a Transportation and Public Utilities Committee hearing to be scheduled in early spring.