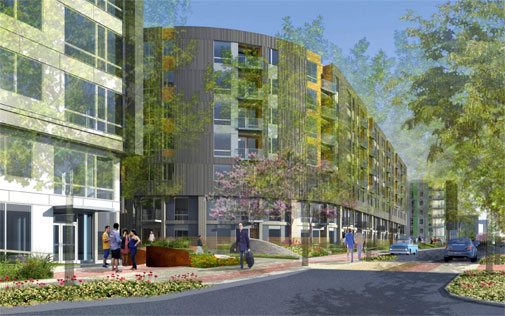 Approval of a special permit for 55 Wheeler St. in the Alewife neighborhood included a landing point for a bridge over train tracks.

The renewed call for a bridge over train tracks in Alewife should get a better welcome now – it’s on the City Council’s agenda for Monday – than it did in November, when the idea had been wiped from the citywide Envision master planning process and encountered resistance from city staff.

At an Alewife planning update in November, the company leading the process said it had been told “not to look at” the unfunded bridge concept, and Assistant City Manager of Community Development Iram Farooq said the city’s strategy was to find recommendations that didn’t rely on a bridge, though that “doesn’t mean that there can’t be a bridge.”

Since then, though, the city has changed how it talks about the project.

“We’ve heard people and acknowledge that it needs to be part of long-term planning for Alewife,” Farooq said in an interview last month. 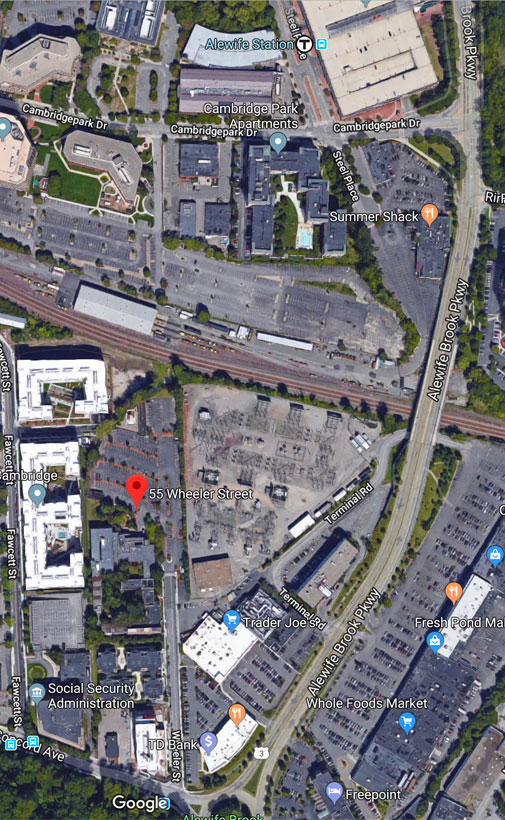 The Alewife T stop is at the top, and Concord Street is at bottom; in between are rail tracks, 55 Wheeler St. and Terminal Road.

Also new since November: While there have long been three potential landing points for a bridge locked in on the north side of the tracks, the city finally identified a landing point to the south when the Planning Board approved a special permit Dec. 19 for a 526-unit project at 55 Wheeler St.

The idea is to connect the area of Alewife known as the Triangle, which includes the Alewife red line T stop, with the industrial area to the south known as the Quadrangle, helping workers walk or bike more efficiently to their jobs. As the area is laid out now, workers have to take Alewife Brook Parkway all the south to Concord Avenue before they can go north again into the Quadrangle. A bridge could halve that distance.

Even a simple pedestrian version of a bridge was long ago estimated at costing $20 million, though, and councillors have talked about more elaborate versions with shuttle buses connecting with the T, or with an attached commuter rail station.

That’s left city planners looking at Terminal Road, which breaks off of the Alewife Brook Parkway southbound to allow access to a few businesses and, after an elaborate loop, to the Fresh Pond Mall. Farooq says building a Terminal Road connection to 55 Wheeler and into the Quadrangle is what the city’s focused on as the next best thing to the proposed bridge over train tracks. “Terminal Road allows you to connect a little bit easier so you don’t have to go all the way down to the rotary, and this piece of the connection already exists,” she said. “It’s quite a bit shorter than what exists currently.”

“We’re not saying a bridge should never happen,” Farooq said, noting that a bridge was added as a feature in a recent department presentation. “We put in a bridge but made it appear as a longer-term option. We’re just trying to be pragmatic and make sure that the plan we come up with will work.”

The city can be focused on Terminal Road first “and pivot back to a bridge” in the coming years, she said.

While funding could come from the property developers who might benefit most from the bridge, contributions based on development cycles come “in fits and starts” that aren’t very helpful to municipal construction – especially from residential developments, Farooq said. So far developers have been asked only for contributions of up to $200,000 to pay for analyses.

The city failed to win a 2014 bid for a federal grant of $925,000 for a feasibility study; environmental reviews and permitting; and design and bid documents. The city would have contributed $465,000, the other third of the total cost.

That grant was just for a bridge study, though, and didn’t encompass adding a commuter rail station. The order being heard Monday by the council supports the Envision Alewife Working Group in calling for “a pedestrian/bicycle/shuttle bridge from the Quadrangle area along Concord Avenue across the railroad tracks to the Triangle area on CambridgePark Drive and a commuter rail stop.”

State transportation planners once rejected an Alewife commuter rail stop as lacking enough riders, but now concerns are about scheduling and costs.

“We have had conversations with the MBTA and [state Department of Transportation] and the secretary of transportation, and while everyone thinks there’s value in action, there isn’t funding for this,” Farooq said. “There are things the city has to balance, and the MBTA.”