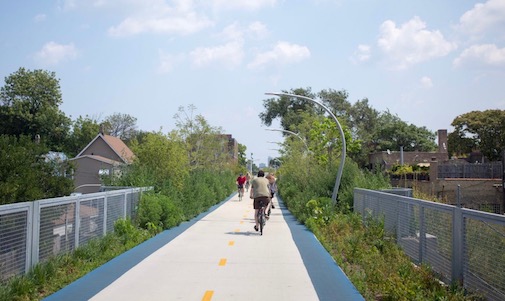 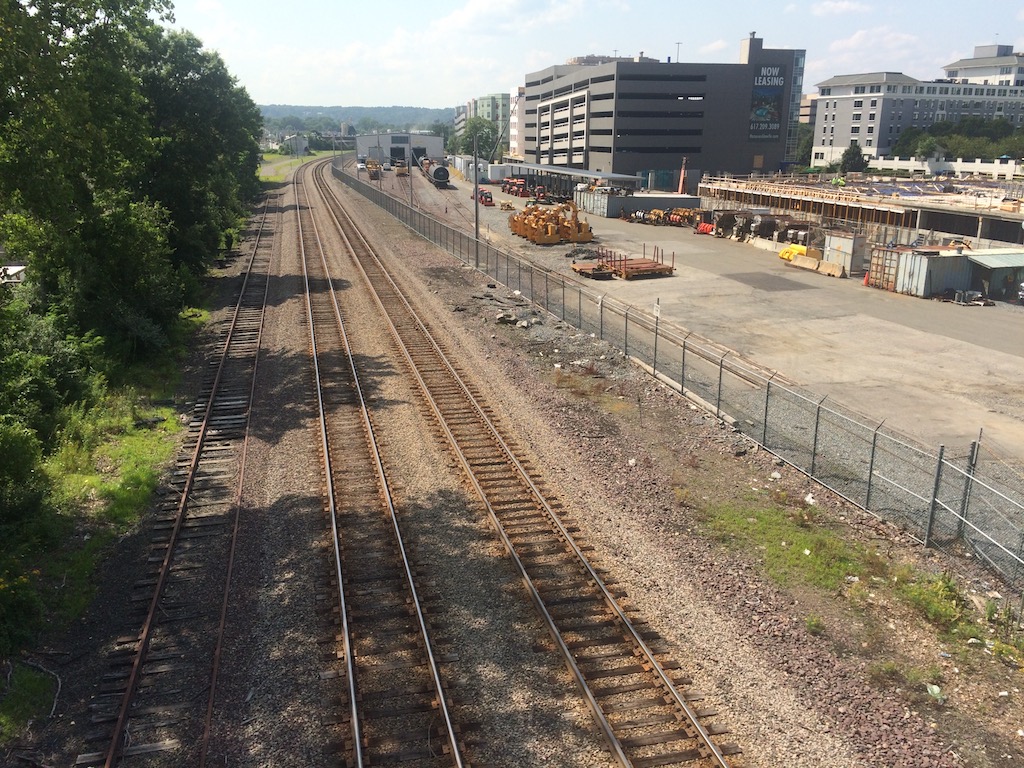 Members of the Alewife Working Group and some city councillors are on one side of a key issue about the future of the neighborhood, and city planners are on the other – ironic, since the issue is bridges.

The difference in priorities was seen at a Monday roundtable about what Alewife will look like in coming decades after the influx of residents and traffic that pushed it to the front of Envision Cambridge, a three-year citywide development master plan process.

Nine of 13 members of the citizens working group presented a letter calling for a bridge connecting the sections of Alewife known as the Quadrangle and Triangle, which are separated by train tracks to the Alewife T station, and for a new commuter rail station that would allow suburban commuters to take a train into Cambridge and transfer to the red line. The station setup now is designed for commuters who drive in, park and get on the T.

A February report on Alewife imagined a bridge over train tracks similar to the Bloomingdale Trail in Chicago.

But a bridge over train tracks contemplated for more than a dozen years, including with a $375,000 feasibility study in 2013 and a $190,000 feasibility and design study in December 2015, got no mention in the update given Monday by Utile, the consultant hired by the city to run the master plan process, despite mentions in earlier Utile reports.

City councillors also brought up bridges. “I think every council member said the last time we discussed this, ‘Put the bridge in,’” said councillor Dennis Carlone, an urban planner who led the  40-acre redevelopment of East Cambridge riverfront in 1978. “There’s no doubt in my mind that without a shuttle bridge, we’re going to hit a big wall early on.”

“Without a bridge, you’re not going to get any support for zoning,” Carlone warned Utile and city staff. “It is absolutely the critical element.”

Developers should contribute to the cost of building a bridge, councillors said, since it’s their projects that will benefit from it. Even a pedestrian version has been estimated at costing $20 million, and Carlone suggested getting the state involved in a more elaborate one with a shuttle bus connecting with the T. Members of the Alewife Working Group also want a pedestrian and bicycle bridge farther to the west of the T station that would give residents living along Route 2 access across the Little River.

Not on the agenda

The two-hour roundtable ended without city planners or Utile representatives coming back to the topic, though.

“There’s been a decision by the city leadership for us not to look at that,” said Tim Love, Utile’s founding principal.

There isn’t funding for a bridge across train tracks, said Iram Farooq, assistant city manager of community development. Asked how developers could be made to contribute to the costs if it didn’t show up in Utile’s plans, which would be used to set priorities and craft zoning, Farooq didn’t answer.

Instead, the city has adopted a strategy “to make sure that whatever recommendations we are coming up with are not contingent upon building a bridge across the tracks,” Farooq said. The focus is instead on Terminal Road and providing access across Fresh Pond Mall, which is privately owned. What Farooq called “probably the best plan” takes an an east-west course while most people are talking about a north-south course, but it would at least connect people with Alewife Brook Parkway and create a path to the rest of Cambridge. “It doesn’t mean that there can’t be a bridge, but we’re trying to make sure it’s not a necessary precursor.”

The answer was unsatisfactory to members of the Alewife Working Group, who were looking forward to a more comprehensive look at transportation and parking issues at their Dec. 12 meeting, though the plan itself was speeding along. (A “very rough draft” of the plan was being submitted Wednesday, Love said.)

“When are we going to put public access to transportation where the huge pressure for development is? If it’s not in the Envision plan and we don’t start figuring out how to fund it and build it, then when is it going to be?” said Eric Grunebaum, a member of the group.

Air rights and other ideas 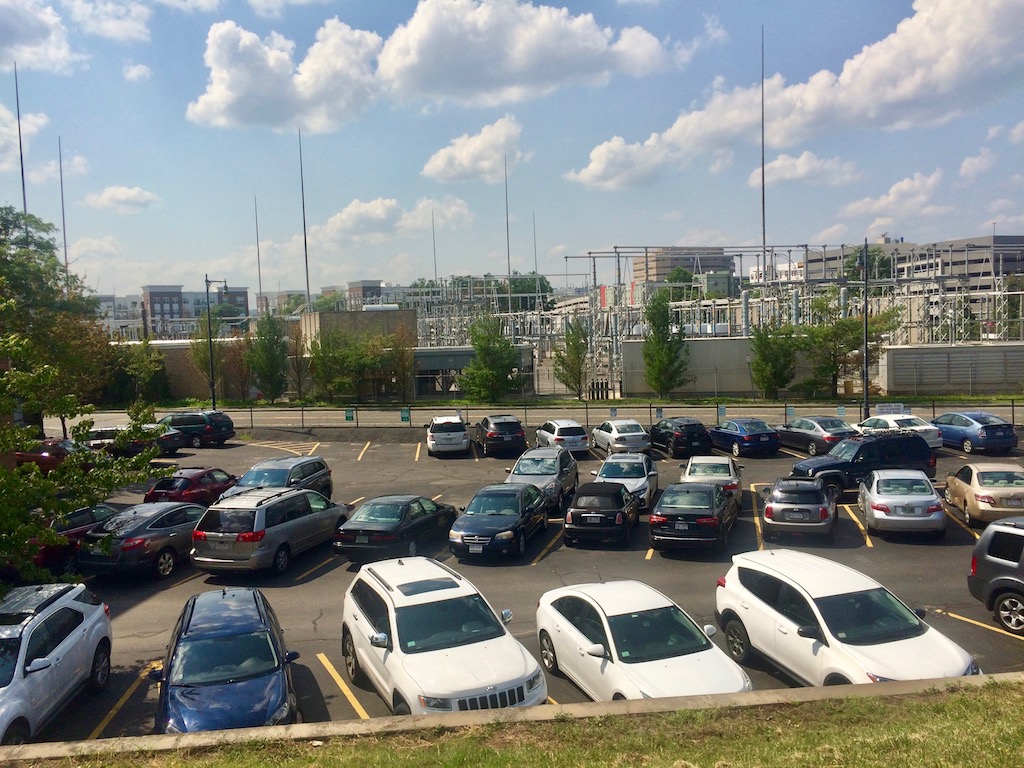 Much of Alewife is industrial and adapted for use by drivers rather than users of mass transit. (Photo: Marc Levy)

Another concept discussed during the roundtable was air rights – covering completely over a stretch of train tracks with developable space, rather than building a bridge across them. But Farooq said the concept had not been discussed “with any seriousness” in Alewife, due to its expense and challenge.

What Utile presented had a number of ideas focused on building a neighborhood with a sense of place and more walkability than the current Alewife, where development has been car-focused with long blocks and sweeping parking lots. Utile envisioned keeping light industry but gathering much of it in a single showcase marketplace; innovation space that would turn Alewife into what Kendall Square was three decades ago; a revamped shopping center modeled after Assembly Row, with residences above ground-floor retail; and a reclaimed Jerry’s Pond.

Councillor David Maher said Utile’s plans seemed “pie in the sky” and unrealistic when imagining that current owners of real estate would buy in or that existing uses such as gas stations would go away, and he wondered at plans that showed streets where there were no streets today.

Love explained that the council could put zoning in place that would affect land when it was sold and redeveloped.

Surprisingly, councillor Craig Kelley said he didn’t expect zoning to come out of the $3.3 million Envision Cambridge process, despite previous planning efforts resulting in zoning and despite taking part in lengthy debate leading up to the council ordering the process in 2014-15. The request for qualifications that brought in Utile called explicitly for “clear strategies for shaping redevelopment through … zoning” and coming up with “a zoning and regulatory strategy necessary to carry out the plan and its recommendations, including … new zoning tools.” 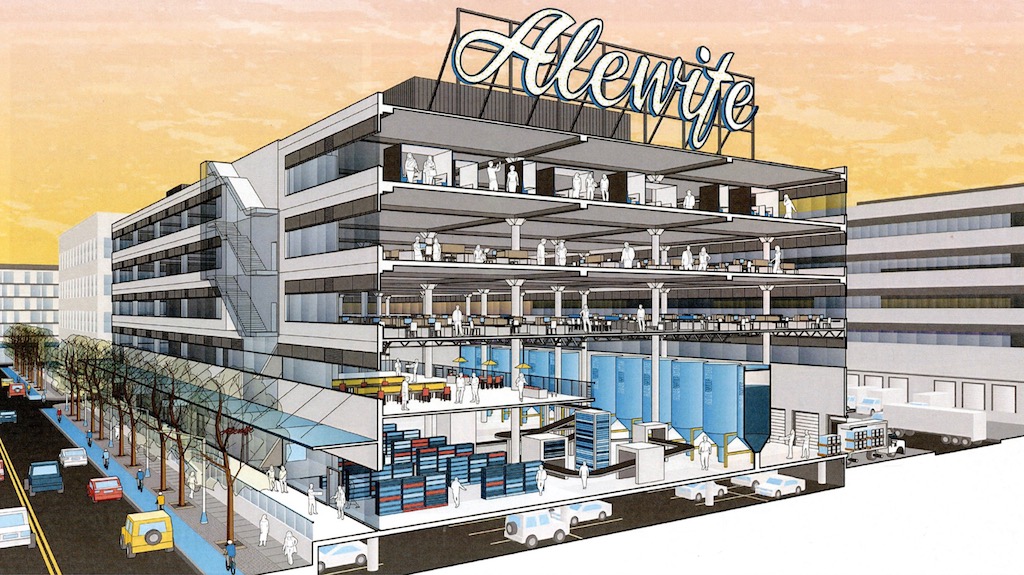 A showcase manufacturing center for Alewife was discussed Monday by the City Council and development consultant Utile.

While the plans were being considered, the city councillors beginning a new term in January should consider placing a moratorium on the “superheated” development in Alewife, Kelley said, since it was “difficult to think seriously about these plan when stuff is just spinning so quickly that’s so foundational about what we do in the future.”

During council debate over the master plan in 2014, fears of a moratorium produced heated rhetoric; at the roundtable, Kelley’s suggestion was heard without comment.

Maher, who is leaving in December to be president of the Cambridge Chamber of Commerce after 10 years on the City Council, including two terms as mayor, said he didn’t want to see municipal opportunities lost – including potential Department of Public Works or fire training facilities – because the city acted too slowly when property came available.

“It seems we’re a little slow at the switch … I’m afraid that had we acted on them 10 years ago, six years ago, two years ago, we may have been able to start solving some of those issues,” Maher said. “Once we pass this and the zoning is in place, I’m not sure there will be opportunities.”

This post was updated Nov. 21, 2017, to amend language concerning a lack of funding for a bridge over Alewife railroad tracks.