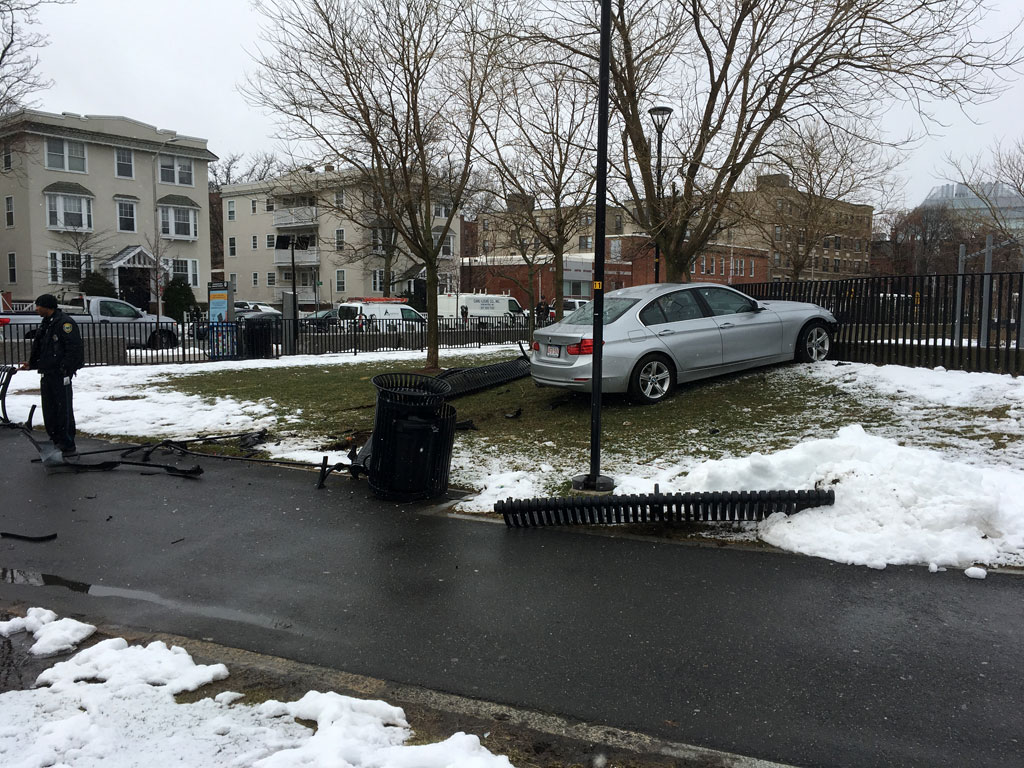 A car came to rest at the 449 Broadway playground Thursday after driving across the grounds in front of the Cambridge Main Library. (Photo: Jean Cummings)

A silver BMW flew off of Trowbridge Street and ended up stopped by the playground iron fence after plowing across the front lawn of the Cambridge Main Library, 449 Broadway, shortly before noon Thursday.

An elderly woman driver, with her apparent aide beside her in the passenger seat, swerved to avoid a car stopping to make a path for a firetruck, sirens blaring, coming east down Broadway, according to the driver of the car in front of her, who asked not to be identified. Their light was green, he said, and as he started turning left off of Trowbridge, he braked to let the firetruck go by. The silver car behind him tried to swerve, “clipping the back corner” of his sport utility vehicle.

She continued straight at a fast pace, jumped the curb, careened across the pathways, through a smaller wrought-iron fence and across the grass, stopped finally by the fence protecting the playground.

Witnesses said that she was able to walk to the ambulance, which brought her to the hospital for evaluation.

Police on the scene said they arrived after the accident and had no information to share yet.

Witnesses in front of the library and inside Angelo’s Pizza agreed she was moving pretty fast across the lawn. “She would have to, to do this damage,” said the driver of the red SUV.

There were no pedestrians in the way at the often busy intersection of two pathways, a sidewalk, and a major crosswalk just yards from Cambridge Rindge and Latin High School.