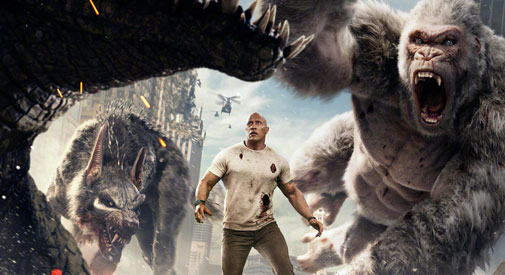 “Rampage” adds little if anything to the beaten-to-death genre of man vs. beast. Dwayne Johnson, whom I assume will be running his 2020 presidential campaign on disaster-surviving, given his roles of late, leads yet another balls-to-the-wall beast frenzy as a primatologist daddy to a massive albino silverback named (not so curious) George. But when a reckless, human-made gene-enhancing substance permeates some wildlife habitats, one of the following symptoms may very well occur: eye roll, raised eyebrow or both. 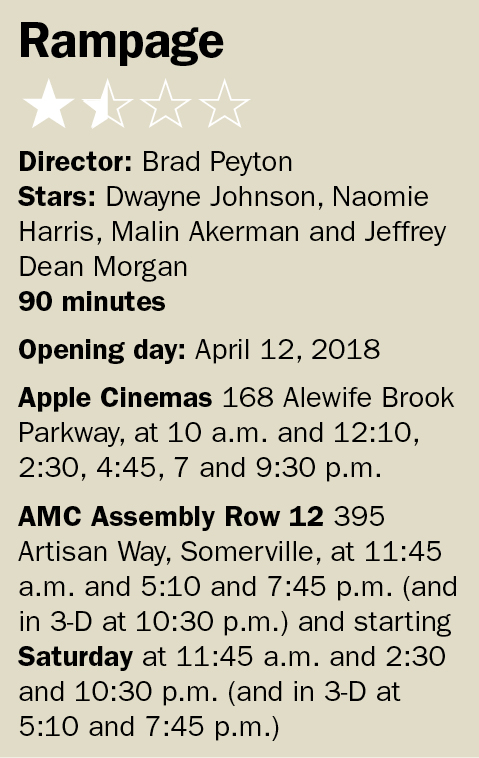 Admittedly, I am not a big animal lover. I tend to view animals how society once viewed children: “Congratulations, you’re little and cute. Go back to work!” Which is to say, everyone served a purpose, even kids, and you better believe animals, wild or domestic, have purposes and jobs too. That’s not a religion thing, that’s just a common logic thing. Wolves travel in packs and seemingly care about the longevity of the pack or, if a loner, their own longevity. Crocodiles don’t come off as giving a damn about anything other than their next meal. Gorillas, on the other hand, are caring yet brutal furry jerks who sometimes possess hearts of gold. (And George has a refreshingly twisted sense of humor.) Now, I can’t be entirely sure, but that’s seemingly what New Line Cinema wants to communicate to moviegoers with its $120 million monster-bashing film, “Rampage.”

Some who remember the Midway arcade game of the same name, circa 1986, will no doubt be served a blast to the past. Others stand the risk of being distracted by whether a city, even one as prominent and large as Chicago, has the budget to cover the tab left by the three towering and feral beasts of the film at the chaos bar.

Brad Peyton, the director of “Journey 2: The Mysterious Island” (2012) and “San Andreas” (2015) absolutely John Hancocks his stylistic signature as a filmmaker all over the screen – but it would have been nice if Peyton didn’t leave any smudges, because “Rampage” is more than a little blotchy. Such is usually the case with visually focused or, dare I say, obsessed directors (cough Zach Snyder cough). Aside from colossal heights of technical extravagance, Johnson’s onscreen star power is the only aspect of entertainment that is buyable in this video game movie. Naomie Harris, two years removed from her Best Supporting Actress Oscar nom for “Moonlight,” is color- and gender-friendly as an American genetic engineer, but the screenplay made little to no use of her character, and when she laments over a personal tragedy during the midpoint “share your feelings” scene between Johnson’s and Harris’ characters, being able to sympathize is none too easy.

Jeffrey Dean Morgan (“Supernatural,” “The Walking Dead”) as the funny, cowboyish G-Man works, though, and not because he pulls off a southern accent (he doesn’t) or because he’s an awesome actor (he isn’t), but because Morgan doesn’t take himself too seriously. That usually unnoticeable intangible is as noticeable as it is infectious, and for this movie, that is very likable.

With the aid of 3-D spectacles (to see this movie in 2-D is a disservice to your wallet), George and the other beasts are something to marvel at. For action-adventure movie junkies and seasoned players of the video game, a cinematic experience such as “Rampage” is all you could hope for; for those who could take it or leave it, “A Quiet Place” is a much better waste of your time.