‘A Quiet Place’: Slightest noise could be fatal and family’s got so many reasons to scream 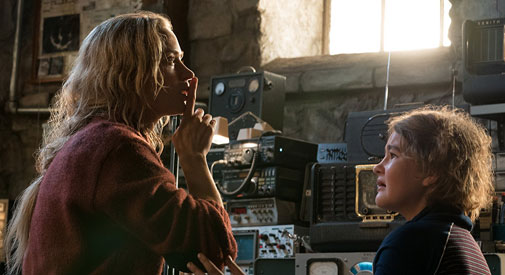 ‘A Quiet Place’: Slightest noise could be fatal and family’s got so many reasons to scream

John Krasinski, that local (Newton) guy from “The Office” whose forays behind the camera have been something of a mixed bag – tackling material from David Foster Wallace in “Brief Interviews with Hideous Men” and the quirks of returning home to small-town America in “The Hollars” – goes for a total change-up here in genre, style and the whole shebang. He’s also grown demonstrably in confidence as a filmmaker, bringing his A-game for an impressive wallop and gets a chance to work with his wife, Emily Blunt, who’s nothing short of fantastic. 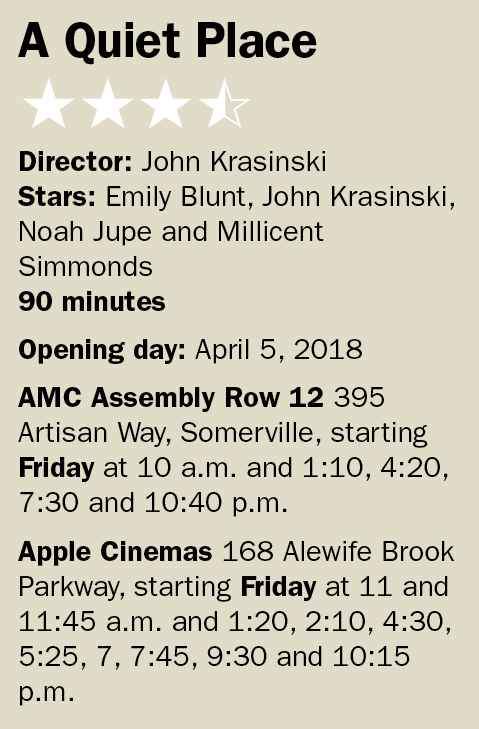 “A Quiet Place” drops you into a post-calamity spot that feels all too close, given the current state of division and fear in the country and creeping need to think about how to survive a civilization-crumbling war or sweeping, sudden natural disaster. We catch up with a family out on a scavenging mission to get medicine and supplies. Inside a ransacked pharmacy, they’re all barefoot and don’t speak to each other as they go about their task. Mom (Blunt) picks up and puts down pill vial after vial with all the deliberate care of one of the silent thieves in Jules Dassin’s great heist film, “Rififi” (1955). The lack of spoken communication and the worry etched on the faces of the nuclear-plus family ratchets to a nerve-racking tic. Wandering about on his own, the youngest boy reaches for a toy space shuttle that lights up and beeps, but dad (Krasinski) is fast on the take and in sign language sternly tells him “No.” Outside, they remain silent and walk single file, never veering from the painted white center line of the road. Along their amble through a rural country-scape we see no other humans and soon learn why – after a noise emitted unwittingly by one of the party draws something formidable and fast out from the woods, and the family is suddenly one less.

Back at the isolated farmstead where the family has taken refuge, we learn from grease boards and news clipping adorning the walls of a basement panic room that a meteor has struck and the aliens ostensibly aboard it have disembarked and begun to surgically munch away on humans, raccoons, cows and anything with flesh that oinks, squeaks or moves with too heavy a foot. The alien, which is something of a cross between a velociraptor and the set-of-fangs within set-of-fangs perfect organism from “Alien,” can’t see; that puts it somewhere between “Tremors” and “Pitch Black.” This realization gives the audience a chance to catch their breath and ponder: Is the family all alone, are there others out there or is humankind on the verge of extinction? All we ever really know is that we’re some 400 days out from the landing. Well, that and the fact that mom’s ready to burst with another child – which only adds to the tension. What happens when the baby comes and mewls for mother’s milk?

If that sounds like terrible way to live – in silence and fear – you could probably apply it to the current political climate in ways I’m sure Krasinski and fellow screenwriters Bryan Woods and Scott Beck never quite intended. What the trio have hit upon, with Krasinski behind the lens, is a new way to mainline fear. The concept of a largely unseen and formidable foe is nothing new, but the details, nuance and orchestration of scenes is done with meticulous care, and it shows.  The scene of suicide-by-alien is nothing short of genius, and the 2-inch nail that Blunt’s mom steps on just after her water breaks – well, I’ll just say that the fan for this taut thriller isn’t quite big enough for all the gump that hits, and always at the worst possible time. Much of the film hangs on Blunt’s expressive and contorted face, as well as Millicent Simmonds’ as her hearing-impaired daughter. If this were simply a thespian throw-down, the wordless women would crush the berserker aliens in no time. Keep an eye out for Simmonds, a hearing-impaired actor in real life; her round face, strong chin and beefy brows cast an alluring countenance. She registered a strong showing in Todd Haynes’s “Wonderstruck” last year – as did Ekaterina Samsonov appearing in “You Were Never Really Here,” which opens next week – and ups her stock here.

There’s really no downside to “A Quiet Place.” It’s effective genre, taken to a new level by bravura performances, atmosphere and masterful execution. It’s everything “It Comes at Night” wanted to be; the fact the fantastical show up and we end up in CGI territory doesn’t detract from the wonder of it.