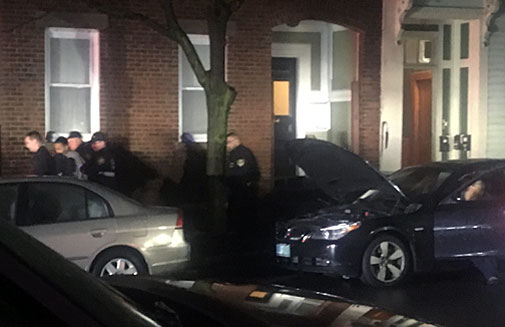 Police lead a man away from a Hurley Street residence Monday after a stabbing. (Photo: Mark Jaquith)

Officers responded to a nonfatal stabbing tonight on Hurley Street, in what’s believed to be a domestic incident.

Around 9:30 p.m. the East Cambridge neighborhood was alarmed to hear a woman’s voice crying out, “Help, I’ve been stabbed,” neighbors said.

Police and fire personnel were on the scene quickly and took the woman to a local hospital. She was “conscious and able to stand and walk and talk, at least until she was put on the ambulance,” neighbor Mark Jaquith said. “She was obviously in great pain, though.”

Police could not say more about the woman’s condition, said Jeremy Warnick, director of communications and media relations for Cambridge police.

A man has been taken into custody from the same address on Hurley Street near Sciarappa Street, Warnick said.

About 15 minutes after the woman had been driven away, neighbors saw a young man led away in handcuffs and placed into an ambulance, which also was driven away.

It was a late development for a busy day for police, including an afternoon press conference about a controversial Friday arrest near Harvard Square and an early morning investigation into shots fired in The Port neighborhood. After a report of multiple gunshots at 1:38 a.m., police officers canvassed the area and found three shell casings outside 106-108 Columbia St., a residential area by a minimart. There were no reported victims, Warnick said, and as of several hours later, no witnesses.

A similar incident came March 31, when gunshots were reported at approximately 4:06 a.m. at School and Cherry streets – only a block from this morning’s shots – and police found shell casings but no victims.