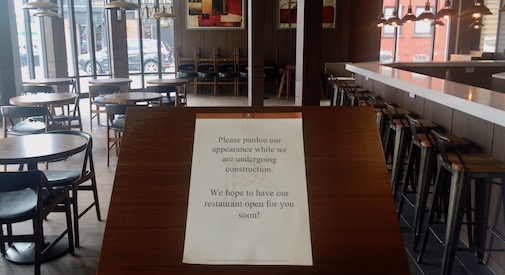 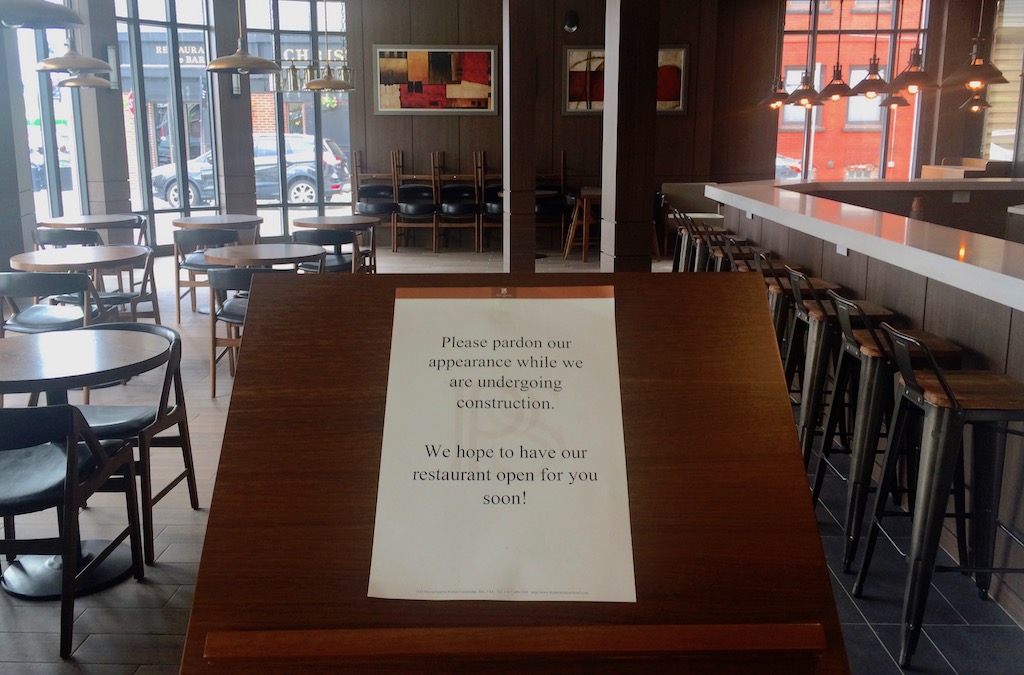 The Porter Square Hotel offers an optimistic message to guests in April 2017 – nearly a year before the announcement of Colette, to open in the space= this summer. (Photos: Marc Levy)

At the end of a tortured road lies the promise of an elegant French-influenced restaurant for the Porter Square Hotel, called Colette and given a summertime opening date by its principals.

Though not quite the steakhouse once described as coming to the hotel, Colette has a steak frites dish on its tentative menu (grilled ribeye with house fries and a green peppercorn sauce for $32) and a porterhouse promised to always be available by Loic Le Garrec, a partner in the restaurant along with Sandrine Rossi. The pair, natives of Paris and Normandy, France, respectively, run sister restaurants in Boston: Petit Robert Bistro on Columbus Avenue, and Frenchie in the South End.

Expect also, based on the preliminary menu, Maine lobster ravioli or Atlantic salmon for $28, a burger in brioche with fois gras aioli for $18 and small plates hot and cold, ranging from a chickpea post neuf ($6) and French onion soup ($11) to duck prosciutto salad ($12) and steak tartare ($14). Even if the details change, diners can get a good sense of the fare at Colette by looking at what’s served at Frenchie and Petit Robert Bistro, Le Garrec said.

Both specialize in traditional French cuisine with a modern American twist and fresh ingredients, the License Commission heard April 11.

But the Porter Square Hotel to which Colette is attached was more than a decade in development before finally opening in October 2016, and its restaurant space – 134 dining seats, 16 bar seats and a 30-seat front patio, according to License Commission meeting minutes – has been through an even longer period of uncertainty, since it has remained empty since the hotel opened. The kitchen has yet to be outfitted, as hotel management waited to lock in the liquor pouring license from Kaya, the Korean restaurant that was once at 1924 Massachusetts Ave., and to keep a chef who will decide what goes in it. Chefs have come and gone during wrangling over the pouring license. 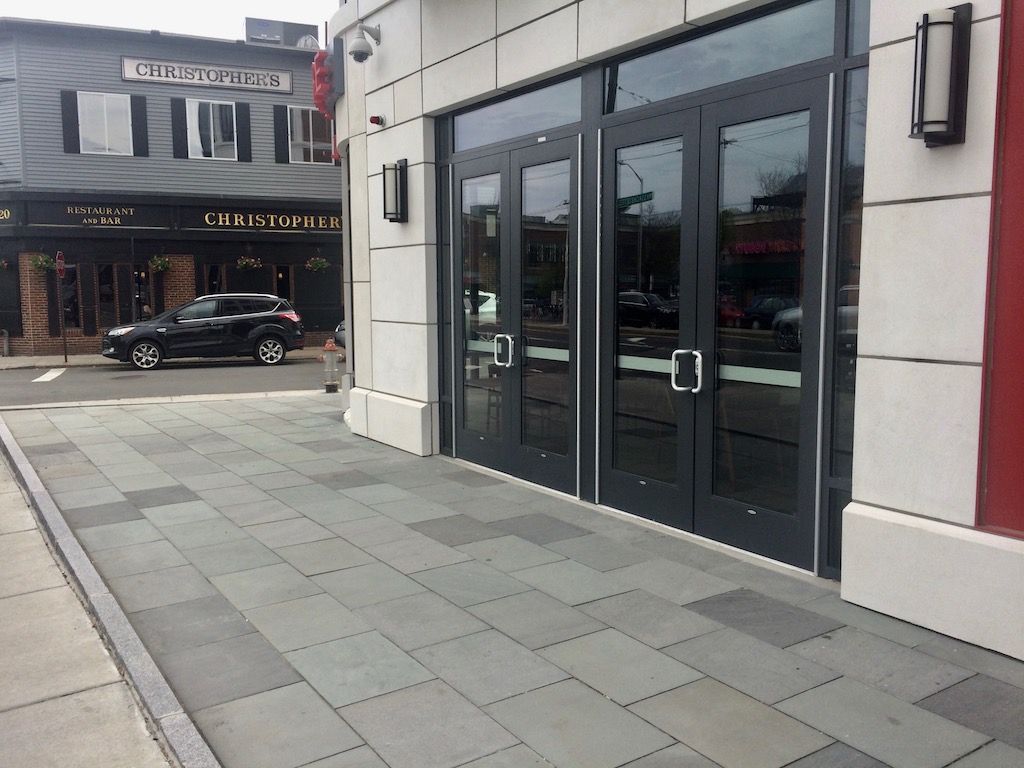 The restaurant at the Porter Square Hotel includes a 16-seat patio area on Massachusetts Avenue.

“In speaking with neighborhood groups, I knew what they wanted in there and I knew what we wanted to put in there,” said Kevin Sheehan, the consultant who finally got the hotel opened and then recruited Le Garrec and Rossi. “There is an overwhelming number of fast ethnic in the area, but nowhere where you can go sit down and have a drink after work and have a meeting, a comfortable two- or three-times a week establishment.” (The management at Christopher’s, the bar and American food restaurant facing the hotel from across the street, might argue.)

Residents said they were eager to see Colette open.

Susan Hunziker, of the Porter Square Neighbors Association, said there had been “a long-term desire for this,” especially foe seeing the patio dining space along Massachusetts Avenue activated. And Denise Jillson, the Harvard Square Business Association executive director who lives in Porter Square, said, “We really need this.” (Jillson said the hotel is a member of her association, but friends have stayed at the hotel and had good experiences.)

Colette will be opened “as soon as possible” – likely in July, Sheehan said. Le Garrec, though, said to look for an August opening, with patio service starting at the same time.

The presence of a porterhouse steak on the menu is significant for the same reason that the restaurant had once been promised as a full steakhouse: It’s rumored that the porterhouse was invented in Porter Square back in the late 1800s, when it was a cattle capital.