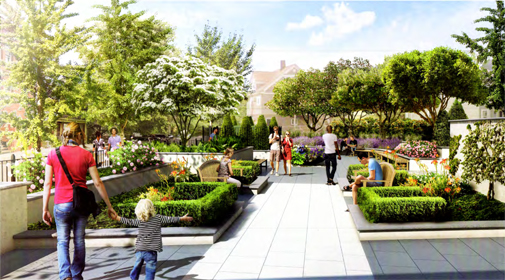 A rendering shows the garden planned for behind the Porter Square Hotel.

After more than a decade in development, the Porter Square Hotel could open to guests in mid-October, though possibly launching without its rear garden and almost certainly without its ground-floor, front-facing restaurant, the Porter House Grill. 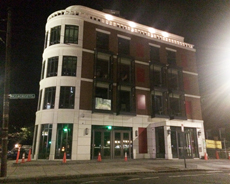 The hotel, which managers said is nearing the end of construction, has been in the works for more than a decade. (Photo: Marc Levy)

The development and management team, which appeared Tuesday before the License Commission for an innkeeper’s license, said Oct. 15 was a possible opening date for the 65-room boutique hotel capped by a fifth-floor terrace deck going in at 1924 Massachusetts Ave., where the Kaya restaurant once served Korean food.

Notably, it was a new team to which the license was granted, and its members announced to the commission that the management company behind the hotel had changed as well: to StepStone Hospitality of Providence, R.I., from Hay Creek Hotels, of Exeter, N.H., which had once given May 15 – six months ago – as the likely date for a soft opening.

“I know it’s piecemeal and a little confusing,” said Lesley St. Germain, of the law firm McDermott Quilty & Miller, explaining that though the Grill was anticipated to follow the hotel room opening “very quickly,” she was not yet asking for a transfer of Kaya’s licensing to serve food or alcohol.

Still, crews are on site hanging drapes and pursuing other finishing touches in hotel rooms, the management team said. Room rates have been described as changing based on demand, ranging between $130 and just under $600.

The North Cambridge Stabilization Committee was taken by surprise by the appearance before the commission, said clerk Michael Brandon, and couldn’t endorse the license being granted without a new presentation about the hotel, given its many false starts over the years. (A presentation for the committee was tentatively scheduled for Sept. 28.)

But another avid watcher of development in Porter Square, Charles Teague, wanted the license granted and the hotel open.

“The consensus is that this should be finished,” Teague said, noting that one of the most significant problems with the project – the delay on its 5,066-square-foot garden – was the fault of Eversource, which chose equipment for the site that required a complicated relocation and ensuing zoning problems. “This has been hashed and rehashed.”

Hay Creek had been playing up the hotel’s technology, including the ability to use customer smartphones to unlock room doors and run fancy, 4K televisions that can stream the customer’s own Netflix account or be used to order room service. (Including a porterhouse steak, which consultant Kevin Sheehan assured would “absolutely” always be on the menu of the Porter House Grill, seeing as how it’s rumored that the porterhouse was invented in Porter Square back in the late 1800s, when it was a cattle capital.)

The new management team, though, may lean toward attracting international travelers, Sheehan said, without losing track of its wish to be “part of the fabric of the neighborhood” with its restaurant, meeting space and garden, which is to get its own entrance from Porter Road, the hotel’s residential side street.

The garden was to be finished a year and a half ago, Sheehan said, before it ran out of the stone called for by architect Michael McKee, of MTMA architects, and Peter Lee, of Young Construction.

“There’s been a lot of delays for the hotel in general, across the board,” Sheehan said.

The hotel will be run by general manager Curtis Butcher, who until recently was at the Charlesmark hotel in Copley Square, and operations manager Mason Mills, repeating the role he played at the retro-chic Verb hotel in the Fenway. The restaurant does not yet have a chef.

This story was updated Sept. 14, 2016, to correct references to the North Cambridge Stabilization Committee, which were given as another area neighborhood group.