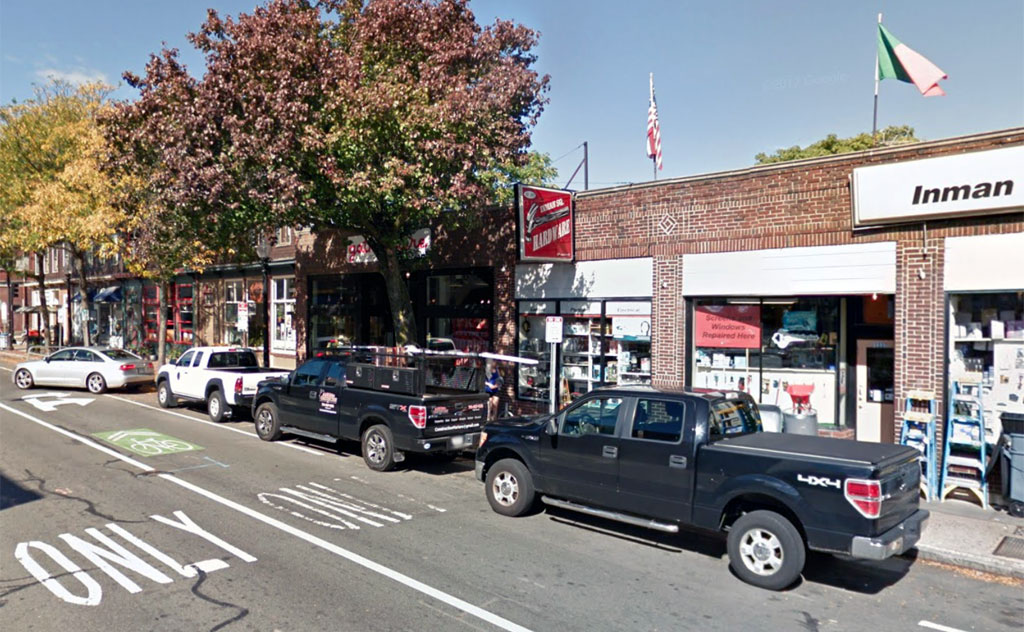 Inman Square businesses don’t look to be getting day parking for employees anytime soon, despite the threat of up to two years of looming construction, but the city is promising studies that could lead to more creative parking solutions in the future.

All that was sought by three city councillors Monday was to explore a test of allowing temporary on-street employee parking in the Inman Square business district, likely using resident spaces that emptied during business hours. But other councillors piled on concerns and City Manager Louis A. Depasquale signaled resistance, leading Mayor Marc McGovern to use his “charter right” to delay taking the issue up formally until the next regular City Council meeting. Authors Alanna Mallon, Sumbul Siddiqui and E. Denise Simmons can use the time to talk with city staff and DePasquale and sharpen the plan, the mayor said.

“I know everyone wants to solve this as quickly as possible, but we’re probably going to need some consulting help,” Pasquale said. “If I learned one thing recently it’s that we need to do outreach. We need to talk to the community, and we clearly need to talk to the residents. Protecting small business is important, but making sure everyone feels like they’ve had a say in this before we put something out there is going to be real important.”

The reference was to the creation of protected bike lanes that have eaten away parking spaces around the city, with Cambridge and Brattle street bike lanes provoking particular outrage from residents with cars and businesses who want curbside parking for customers and deliveries. In this case the call for help comes from small businesses, which have been increasingly vocal about pressures put on them by the city – including bans on plastic bags and polystyrene packaging – as online shopping has sapped their customer base and surging rents make it harder to stay and keep locally based employees.

Businesses from East Cambridge’s New Deal Fish Market to Inman’s Albertine Press boutique print shop have told councillors of parking issues causing them to turn away qualified employees, and of problems with parking by those who must drive from as far away as Roslindale and Everett to work in a square that’s 15 minutes’ walk from the nearest T stop. “There’s no reasonable way for them to commute each day, except by car,” Barandes said. “The parking situation is limiting our talent pool and business growth.”

It’s one of the top concerns heard from members at the East Cambridge Business Association, said president Jason Alves, and infrastructure changes and construction – to improve safety around where Cambridge and Hampshire streets meet – will combine to make Inman a place where a test of parking innovations would be welcomes and urgently needed. Driving the residential streets around her 1309 Cambridge St. business, Barandes said she counted at least 38 spaces going using unused during the day.

“Anything we can do to help small business, it’s certainly important that we look at it,” said DePasquale, before rejecting the idea as untenable because it favors one kind of employee in one location – public school teachers and municipal employees citywide being caught in the same kind of crunch. (“We had to say ‘Sorry your teachers are getting $500 a month in parking tickets, but we can’t let them park on the street,’” McGovern recalled from April meeting with the School Committee.) The city has been emphasizing alternative modes of transportation for years and trying to discourage cars from coming into the city.

Mallon was taken aback, and referred to the city’s own recently written Retail Strategic Plan, which names Inman Square as the third-least accessible retail location in Cambridge for cars. “It goes on to say that it behooves us to recognize that transportation needs differ across the districts and that less-multimodal districts may require tailored transportation strategies to accommodate the needs of business. As a result, parking availability is absolutely critical,” she quoted.

“We had a retail strategy report that pretty much calls out that we need to do something different  for some of these areas,” Mallon said.

The current approach sends employees out onto the streets every two hours – as parking meters run out – to drive around and find new metered parking spaces to take up, when those spaces should be open to customers of their businesses, Mallon said.

The city doesn’t have data on parking spaces citywide, though it is preparing to do a complete street inventory, said Joseph Barr, director of the city’s Traffic, Parking & Transportation Department.

The city has already offered to let business parking creep down mainly residential side streets when spots disappeared with the installation of Cambridge Street bike lanes, and councillor and urban planner Dennis Carlone suggested that offering up at least the first four spaces in side streets would have little impact on neighbors.

“I’ve received complaints from small businesses because there used to be some overlap with spaces that were metered during the day and residential overnight. That has been taken away recently because the construction’s done. Those businesses had adapted to that being there,” Zondervan said. “We’ve already kind of run our pilot, and we’ve seen it does help.”