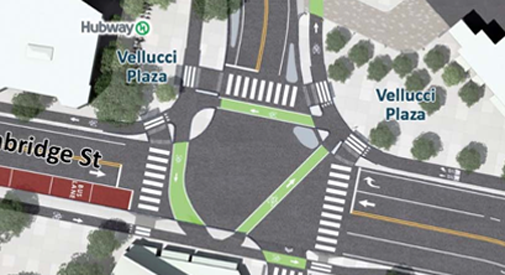 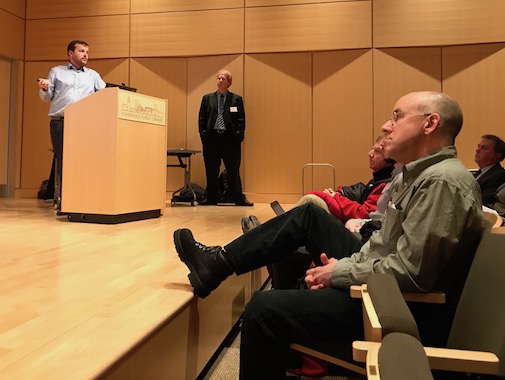 A second way to redesign convoluted Inman Square to make it safer for cars, bicycles and pedestrians was being considered nearly until the start of a public presentation Tuesday – until city transportation planners caught its “fatal flaw.”

For several residents watching changes in the square, how trees would be treated seemed just as important as what happened to the streets, with some raising the prospect of civil disobedience to keep trees from being removed for improvements. But before those threats were raised, attendees first had to understand which plan they were being pitched.

An explanation of an “alternative” plan was given before it was explained that the city was sticking with the “current” plan.

“We’ve been working on our analysis and presentation literally until today, [and] as we went through the analysis in more detail and really dived down into some safety issues, we found the alternative had a fatal flaw to it,” Traffic, Parking & Transportation Department Director Joseph Barr told a crowd of up to 150 at the Cambridge Main Library’s lecture hall that included city councillors Quinton Zondervan, Sumbul Siddiqui and Alanna Mallon and vice mayor Jan Devereux. “We really did believe this was something we could make work. [But] looking at safety, we did not feel comfortable – it was not something we could move forward with.”

Planners had been taking steps on improving safety and traffic flow in the square since late 2014, but the death of a bicyclist in Inman Square in July 2016 focused attention there, “where there are ongoing safety issues and we feel it’s really critical that we move a project forward,” Barr said.

Once a plan is pinned down, the city expects to spend around $6 million in total on design and from 18 to 24 months of construction, officials said. The next planned step is a March meeting on the design of Vellucci Plaza, now a paved park with several trees.

The solution presented in May splits one complex intersection into two, bending Hampshire Street to the west as it meets Cambridge Street by shrinking the existing plaza and building a larger twin across the street to the east, on a new bumpout in front of the Punjabi Dhaba restaurant.

The alternative being examined by planners kept Hampshire Street straight and leaves Vellucci Plaza as it is (although adding a small bumpout plaza across the street to the south, by the fire station). But planners realized how difficult it was for drivers to understand how the square operated, depending where they entered, and whether certain left turns were allowed – and for some, a left turn would bring them dangerously into an oncoming stream of vehicles, then two alternating streams of bicycles and pedestrians, explained Patrick Baxter, an engineering manager with the department.

One of the principles of Vision Zero, a program to reduce traffic deaths to zero that has been adopted by the city, is that roads are engineered to take human fallibility of the equation. The planners found the alternative version was “confusing and potentially hazardous.”

Even with left-hand restrictions now in place, police report “dozens” of drivers a day taking the left turn anyway.

“It became apparent that it is necessary to maintain the left-turn restrictions in order to allow this intersection to operate safely and efficiently for all,” Baxter said.

The proposed redesign includes signaling changes, so there are times when pedestrians are crossing the street and no cars are allowed to move. There are bicycle-only lanes as well as sections of the road where there are bus-only lanes in the plan, and green light priority for buses that will let transit drivers get through an intersection even as single-driver cars stop. The plan maintains 80 percent of parking spots and adds five spaces to the Springfield Street parking lot. Some parking is retained by relocating bus stops and crosswalks away from the northwest side of the square, near Somerville, and moving them deeper toward the East Cambridge side. 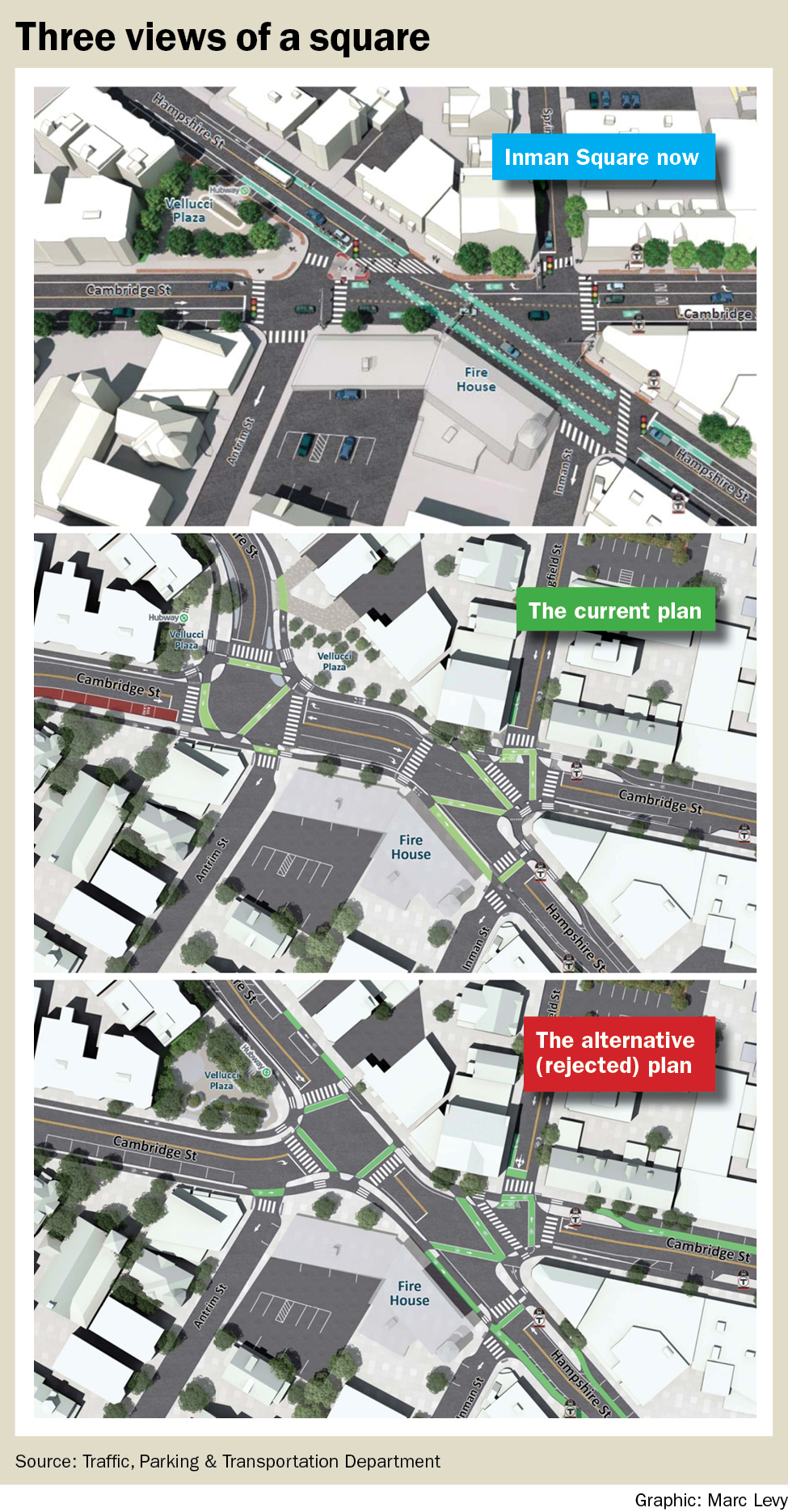 Fighting for the trees

The changes to Vellucci Park require taking out mature trees, and the extensive root systems on older trees made replanting all but impossible. By putting in more, but younger trees, the area would have about 85 percent of current coverage when Inman Square changes are done and from 100 percent to 135 percent in 10 years, said Kathy Watkins, city engineer. In other steps that could help deal with the blazing heat coming with climate change, black asphalt would be replaced by lighter materials in spaces such as the Springfield Street lot.

Some environmentalists in the audience weren’t buying it, with one woman chiding the experts on stage as having “a too-small view of what is going on” and being essentially in the role of providing safety vests to lemmings, but “the safety vests will not save us.”

“There are many, many people in Cambridge who are willing to do civil disobedience if it comes to that,” the officials were warned.

Maggie Booz, co-chairwoman of the city’s Committee on Public Planting, said she wasn’t sure she was “ready to chain myself to a tree, but I’m getting to that point, because I’m not seeing trees thrive and grow and develop into shade trees like we expect an urban forest to provide for us.”

Sara Mae Berman, 81, said she didn’t expect to live long enough to see the newly planted trees flourish, considering her experience on Fayette Street, where three decades-old Norway maples were cut down “and you planted some twigs.”

“I don’t see point of dividing Vellucci Plaza into two pieces, and I’m feeling so strongly about it I may do some civil disobedience,” Berman said. “You’ve got to find another way to do it.”

“I don’t disagree there are a lot of other factors that need to be taken into consideration, but we have very publicly stated that safety is our No. 1 goal. We are trying to make this intersection as safe as we can,” Barr said.