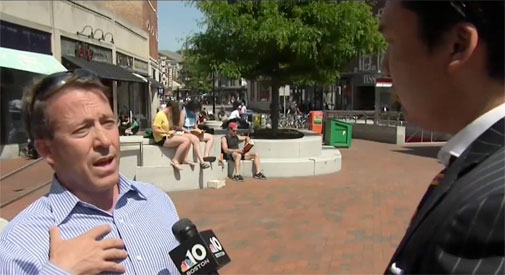 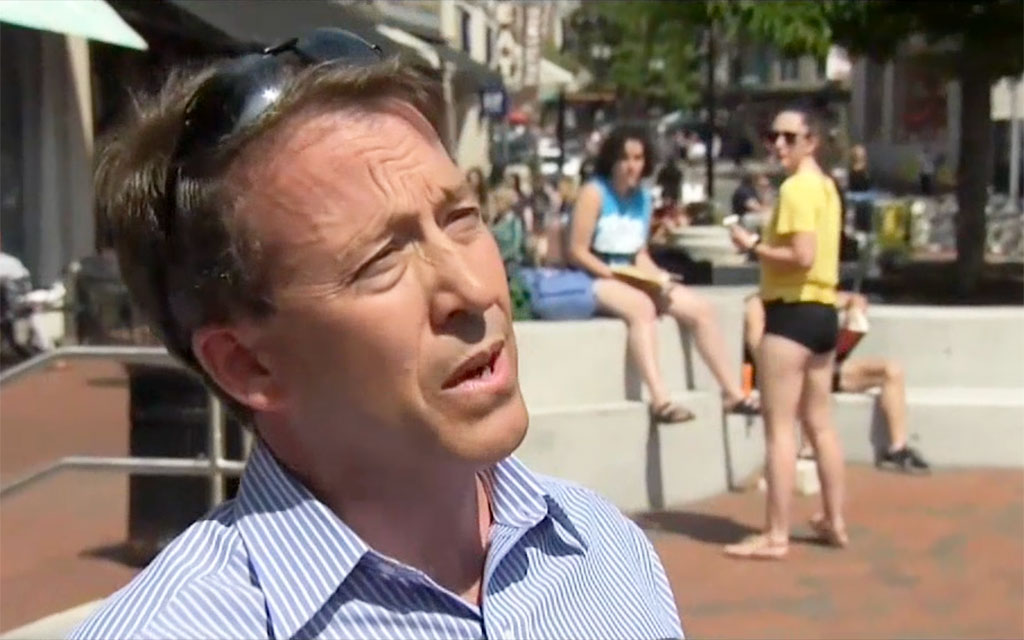 In this screen capture, John DiGiovanni speaks to Boston’s NBC Channel 10 in May in Harvard Square about his purchase of the EMF Building in Central Square.

Artists and musicians angry about the loss of their EMF Building near Central Square are boycotting this year’s Make Music Harvard Square/Fete de la Musique event. They say the sponsoring Harvard Square Business Association can’t “sidestep” its connection with John DiGiovanni, its board president – and the developer who evicted them.

The association argues that DiGiovanni’s purchase in Central Square has “nothing to do the HSBA, [and] there has been a deliberate and unfair melding of the two.” His advocacy of the arts everywhere except in his own building has the artists feeling differently.

They have a point.

The run-down, officially dangerous condition of the EMF Building isn’t really worth arguing about, except to acknowledge how it’s being used as an excuse. Not all the issues are DiGiovanni’s: The city is culpable in precipitating a crisis by letting its inspectors take a lackadaisical approach to building safety. The 120 Brookline St. structure was cleared repeatedly as safe for its 200-plus tenants for more than a decade, then retroactively declared a deathtrap that neither DiGiovanni’s insurers nor the city would touch. The experts and officials who say no one wants to be the owner of a building where disaster is a daily risk could have spent the past decade working with the previous owner to encourage improvements ensuring 200-plus people didn’t die on any given day; instead they just marked the place “safe if we won’t be sued over it” and moved on.

That brings us to DiGiovanni, who made a choice to buy the EMF Building two years ago for $4 million.

Because the man doesn’t speak with Cambridge Day – never has, another choice he’s made, despite repeated attempts dating back years on a variety of topics – it’s hard to know exactly how every decision about the property was made. He spent the first year of EMF ownership with limited access to the building due to legal conflicts, it’s said, and at some point since his purchase learned that the insurer for his other properties refused to have anything to do with it. The insurer didn’t blink even when DiGiovanni threatened to move all of his properties to another company, essentially forcing him to shut down three small businesses and evict artists and musicians from their affordable studios and rehearsal spaces to make wholesale improvements to the building that supposedly couldn’t be done while it was occupied.

DiGiovanni said he has no future tenant in place or solid plans for the building, and though he has investors and “has to do something financially viable,” as Mayor Marc McGovern recounted after a meeting with DiGiovanni, the developer has made vague promises to consider a creative nonprofit use: “We’ll see what we can put in there that is additive to the community.” (These words mean literally nothing, including the last part that means literally anything.) He made it clear to a group of artists Friday that he wouldn’t sell the building to help it remain EMF, though, even for a profit.

To make any sense of the subtext of this narrative – that he somehow found himself the owner of a building in such bad condition that he’s forced to evict the artists – it’s necessary to believe that either DiGiovanni paid $4 million for a building he didn’t get appraised, or that whoever appraised it did so bad job that the condition of the building came as a shock. Because Trinity Property Management’s DiGiovanni is a savvy real estate professional, it’s hard to swallow either the forgetfulness or the incompetent contractor. That he bought the building with other people’s money makes it even harder to believe that the kind of appraisal normal people get before buying a one-bedroom condo didn’t turn up the kind of issues that would give a pro pause before plunking down millions. Gut rehabs aren’t cheap, and they don’t tend to be surprises.

Of course, there is one reason there would be no appraisal, or a lazy one: Because the buyers ultimately didn’t care whether the building would need no work, a gut rehab or a total teardown, because they knew that no matter what happened they’d be able to recoup their money some way.

The truth is, the choice to purchase the EMF Building was probably very well researched. The buyer and his investors knew who and what was in the building.

That brings us to February, when DiGiovanni suddenly has it announced to his tenants they must be out by the end of April. After extending that a month under public pressure, he held to the deadline. (Some tenants remain in the building, having vowed to refuse to leave without a day in court to assess their verbal leases.) That might make sense if there was an actual timeline for something to happen with the building, but with no plans for it and no permits pulled for any work, which means no construction crews available to commit to show up to start work, it’s hard to see the deadline as anything but just another choice DiGiovanni made – maybe aided by not sitting down with any artists face to face until nearly six weeks after they were supposed to have all left. They asked to meet several times, he chose not to.

DiGiovanni had built a legacy for himself as a leader and shaper of Cambridge’s treasured Harvard Square, and some in the community have good reason to think of him as a philanthropist who acts with humanity, generosity and wisdom – and we’re not even talking about the politicians who can count on him for campaign donations.

Unfortunately, the choices he made in Central Square have tainted that, or at least given him a parallel legacy. The nurturer of whatever keeps Harvard Square special in an age of oppressive branding and online retail is also the reckless destroyer of what keeps Central Square special, who found a place throbbing with art and music and decided to shut it down, also deciding not to listen to his tenants until they were already on the street. Now all that’s left is for him to decide what’s next: Will he build a better EMF and become as admired in Central Square as he is just one square over? Or will he lock in a legacy as the man who decided to swing the wrecking ball at affordable music and art in Cambridge because … well, let’s face it, because he just wanted to buy a building somewhere.

As a greatly diminished number of bands prepare to take the stage at Make Music Harvard Square/Fete de la Musique, here’s how DiGiovanni’s legacy stands in a city that says it cares about the arts: So far, he’s the guy who went to Central and shut off the music.

In Harvard, so far, he’s only turned down the volume by half.