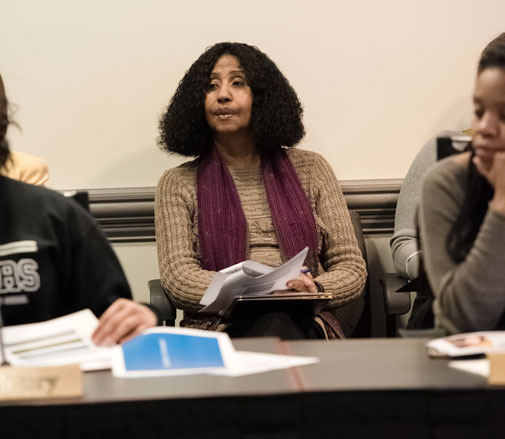 Efforts toward equality were a focus in the last School Committee meeting of the academic year, with members looking Tuesday at policies that keep students eligible for time-consuming and defining extracurriculars such as sports and theater; gender diversity among educators; and how to see schools through racial tensions.

Equity across sports and theater. A joint motion by members Emily Dexter and Laurance Kimbrough pushed to look at equity issues created by the policy to require minimum grades to participate in sports. The Massachusetts Interscholastic Athletic Association requires all athletes to maintain a 2.5 grade point average, or pass at least two of four classes per semester in the block schedule used by Cambridge Rindge and Latin School. Cambridge has been using the tougher standard of passing three of four classes. The attention to a star athlete’s benching brought renewed attention to the policy. The MIAA rationale is to align with the National College Athletic Association’s 2.0 grade point average requirement, although several Cambridge coaches have suggested that kids won’t get into many colleges with a 2.0 average.

Dexter, Kimbrough and others have raised the issue that sports are often cited as key tools in keeping students involved when they’re in danger of disengaging with school. A successful sports program provides supports and community for students, they argue. School data on athletic suspensions show that poorer and nonwhite students are disproportionately affected, and imposing the suspensions does the opposite of what schools should do – drop the student’s support system, they argue.

There has been considerable work this spring to create early warnings and supports to athletes to ward off suspensions. This week’s Dexter/Kimbrough motion urged another review that includes considering whether the lack of eligibility requirements for theater participation suggests that the policy is not “equitable across students and across extracurricular activities.”

Dexter said the motion is “not about putting further restrictions on theater, but rather fewer on sports.” The goal is to “unpack issues of effectiveness of motivation,” she said. Is it fair and equitable, she and Kimbrough asked, to require a minimum academic level for the privilege of engaging in sports and not for the privilege of engaging in theater? Both can be time-consuming; can provide considerable motivation and commitment to school; and are notably racially and economically diverse at CRLS.

The motion was rewritten to direct the superintendent to research the issue with student and staff input and return recommendations to the committee by December for deliberation. It passed 5-2. Fred Fantini voted no, saying that “the athletic side has been fully discussed” and that he was reluctant to include theater. Bowman was the other nay vote; unlike Fantini, she suggested that “the review of academic standards and supports” is ongoing and expressed concern that this motion would “impede the progress.”

Gender diversity. With the district’s commitment to achieve 30 percent teachers of color by 2020 (an increase from the 25 percent goal that has been in place for years, but never met, although the present level is 23 percent), Patty Nolan and Kimbrough moved to additionally set a goal for increasing the share of staff that is male. Asserting “evidence that having role models of caring male teachers in younger grades is positive for all students,” the motion called for a goal of 25 percent male staff in elementary schools. Data show current Cambridge elementary school levels ranging from 4 to 25 percent male teachers and 3 to 18 percent male other staff.

Dexter and Mayor Marc McGovern agreed on the importance of the issues. Fantini said it was “worthy of more in-depth discussion” and wanted to include Executive Director of Human Resources Barbara Allen. Vice chairwoman Kathleen Kelly said she was “conflicted” because she worried adding this goal might divert attention from the goal of increasing teachers of color. She suggested including the new program manager for diversity development, Ramon de Jesus, into the discussion. McGovern wondered if they had the data to know what a reasonable goal was.

At Bowman’s recommendation, the motion was referred to the superintendent for exploration with a tentative recommendation slated for the August summer meeting, but not before Nolan reminded members that “nobody asked is it even reasonable to establish a certain percentage of teachers of color? We didn’t ask, because that was what we wanted to do.” She said the goal could be a complement to the current goals of the district plan.

Racial tensions. Members unanimously passed a Manikka Bowman motion to hire “diversity and inclusion specialists that can assist the district with appropriately managing issues of racism in real time.” The notion is to start with a consultant on retainer, Bowman said, “for us to get the healing that we need.” Depending on the outcomes, it could become more permanent, she suggested.

As opposed to previous and ongoing work training staff on cultural competency and anti-racism, Bowman said, she envisions this person working directly with traumatized and hurt students and staff to address specific incidents and issues. The motion got considerable support from several parents and from Dan Monahan, president of the Cambridge Education Association union, during public comment.

Although there seemed unanimity in the concept, Nolan pushed back a little on the process: she noted subtly the contrast between Bowman presenting this motion compared with several unsuccessful attempts by other members to effect change with motions to add staff or direct how staff should be used that Bowman in particular protested. Examples include Fantini’s support for subsidizing student costs for CRLS international travel programs, which Bowman rebuffed, objecting to asking for funds outside of the budget season and not strategically weighing the request against other competing interests, among other things; or Nolan and Kelly’s recent motion to include input from CRLS staff, students, families  and committee members on the use of next year’s additional CRLS guidance counselor, which Bowman charged as “micromanaging” the use of staff and beyond the committee’s scope.

Members passed an agreement between the committee and educators’ union allowing for next year’s junior/kindergarten and first-grade Mandarin Immersion classrooms to be larger than the contractual maximum. Chief Operating Officer Jim Maloney reported that Martin L. King Jr. School teachers and its principal decided they would rather keep the oversized classes together and hire four new part-time positions instead of splitting them into smaller classes. An additional consideration, he said, was the lack of space for an extra room in the two-and-a-half year old $100 million building – which was noted with some reproach by McGovern and Bowman. Dexter alone voted against: “If you talked to other teachers [in other schools], I’m sure they would like extra staff as well,” she said, noting that the program has also had difficulty attracting lower-income students, suggesting inequitable allocation of resources.

Members also agreed to a plan to conduct the superintendent’s evaluation by August, with a subsequent public hearing by Sept. 11.

A Bowman motion to get a report on all Rindge School of Technical Arts program students “entering the workforce” and the creation of an annual “Signing Day” to celebrate such students was set aside by McGovern using his “charter right” in the interest of time, because he had questions. An attempt by the Governance Subcommittee, chaired by Bowman with Fantini and Nolan serving, to set more “clear goals as a governing body” through the executive secretary, rather than as individuals, was changed at McGovern’s suggestion to having an October retreat for open discussion.

The committee also accepted unanimously $600 of donated art services to the Morse School; $1.3 million of federal and state funds toward breakfasts and lunches; a $264,000 state grant to support pre-school aged children and their families; and a $34,000 grant from the Harvard Graduate School of Education to pay for half of a 10-month doctoral student intern to the superintendent.