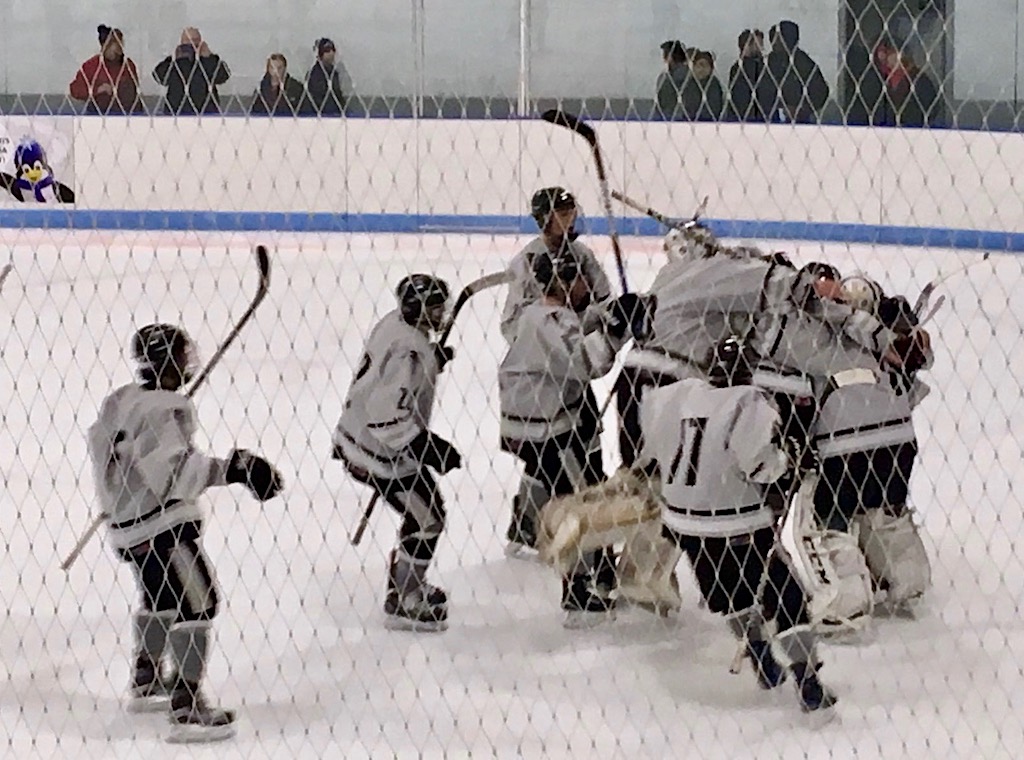 A few weeks after an abrupt decision to suspend the high school policy of docking students’ grades for attendance problems, the School Committee considered altering another grade policy – this time for students playing sports. Despite five of seven members signing on to one of two motions addressing the issue, in the end the committee simply voted to “refer the issue” to the superintendent for further recommendations.

The flashpoint was the benching of a Cambridge Rindge and Latin School varsity hockey star on the eve of a tournament for failing to maintain a 70 grade point average for the first semester, as per school policy. The blow to the team, the coach, the senior student and his family sparked outrage with reported emails and phone calls to administration and committee members. The main issue for the family, the boy’s father told Cambridge Day, was that they had had no idea he was in academic trouble until he was told he couldn’t play.

It touched a nerve with other families and coaches troubled by the policy. In February, two editorials declared the policy unfair and out of step with current research and legal interpretations, written by parent and former president of Friends of Cambridge Athletics Larry Childs and coach and former CRLS athlete, mayor, city councillor, School Committee chairman Anthony Galluccio.

By the time of the March 6 committee meeting (the first regular one since Feb. 6), the issue for the hockey team was moot – it lost the quarterfinal game two days earlier. Yet members were sufficiently concerned about equity, fairness and communication issues to submit two attempts to improve the situation: Mayor Marc McGovern, Fred Fantini and Patty Nolan proposed that students not be put on athletic probation – a two-week suspension – until their grades drop to a 65.49 grade point average, that the clock not start until students and parents are aware of the grades and that the superintendent work with administration to improve communication and the provision of student academic supports, as dictated in existing policy. Members Laurance Kimbrough and Emily Dexter asked that the minimum be dropped to 60 for the rest of the year, with a directive that the CRLS administration develop a proposal and recommendations for improved monitoring and support of students.

“We need to consider the unintended consequences” of a policy disproportionally affecting the most vulnerable students, said Kimbrough, who said he was drawing on his experience as a coach, CRLS guidance counselor and Cambridge youth worker. For many students, he said, athletics is the “hook” to get them involved in school, especially given that “we don’t have the same resources for [all] kids at home to access the curriculum.” Using the punishment of suspending them from sports “really undermines how they feel about themselves and undermines the team,” when the schools, he said, should be supporting them academically. The result, he concludes, often backfires by alienating rather than further engaging the student.

“Research is showing us that students do perform better when they participate in sports than students who do not,” Kimbrough said. He also cited coach reports of students who avoid taking demanding courses that could jeopardize their grade average – in one example, a senior “very interested” in talking precalculus who opted instead to take gym to preserve his eligibility to play.

“For some students,” Nolan agreed, “this is their lifeline. We don’t have these standards for other activities – the school play, the musical, photography.”

Dexter similarly argued that the use of this policy for only athletes was unfair. “This policy is targeting only a certain type of student and not others,” she said. “This is not about expectations, this is about punishment. If we punish in a way that undermines academic achievement, then it is not accomplishing what it is intended to do.”

In public comment, varsity baseball coach Joe Maloney echoed Kimbrough’s reference to research showing the importance of support, and supported Dexter’s position: “There is a troubling pattern of discrimination toward low-income and students of color … We should incentivize” instead of punish, he said.

The policy on the school’s website lists actions the school will take for athletes whose academic performance is slipping:

If a student falls below a 70 GPA (from 67.5 to 69.49), he/she will be on academic probation, and it is mandatory for them to attend homework center three times a week for two weeks. At the end of the two weeks, the athletic director and principal will review the progress reports to determine if the student-athlete can participate in interscholastic contests.

If a student has less than a 73 GPA, he/she will be required to attend homework center once a week before going to practice. The student-athlete will bring a note to their coach from the homework center or teacher.

In the case of the hockey playing senior, none of this happened, according to parents Thomas and Annemarie Caterina and others close to the situation. Nor was that claim disputed by administration. The hockey coach was in his first year, and the parents said he was in the dark about the process as well.

This absence of communication was a major focus for McGovern and Fantini. “We need an early warning system before grades come out,” Fantini said, “and we need a mechanism for a hardship appeal.” McGovern spoke of the need to “expand the probationary period” – which presumes that students and families are aware of the beginning of the probationary period.

When last the student checked the Aspen student information system, his family maintained, he had a 79 average. But between the end of the semester and due date of final grades, a teacher or teachers entered several assignment grades that had been completed some time ago.

Is it even working?

Nolan was focused on whether the existing policy worked, keeping athletes engaged and doing better in academics. “The whole intention when we [enacted] this policy was to raise standards. It’s not clear to me [it’s] making a difference,” she said.

Kimbrough agreed, asking Superintendent Kenneth Salim directly: “Do we collect any data that says when students lose eligibility that they recover [their grades]? My experiences as a coach is it doesn’t happen.” He clearly suspects that the “devastating impact” to the student of not being able to play in practice far outweighs any inducement to keep up grades.

“With regard to the data question,” Salim said, “I don’t have in front of me the answer to that question. That and many other questions are worth surfacing. We are not talking about a large number of students, fortunately.”

The lack of data was despite the issue arising via emails and phone calls from several people to administration and the committee a few weeks before the meeting; the publication of two editorials from people intimately involved in CRLS sports; and the presence of two motions on the committee agenda. Neither Principal Damon Smith nor Athletic Director Tom Arria were at the meeting to field questions. (Similarly, Smith was not present at the Jan. 16 meeting on absence violations.) It is up to the superintendent to determine which staff accompany him at committee meetings.

Some committee members opposed the changes.

“I am completely taken aback that … we would recommend lowering a standard from a C to a D for students” particularly as Cambridge initiates a District Framework “highlighting rigorous, joyful learning,” member Manikka Bowman said, expressing empathy for the students. “I came from a low-income background [with a] single-parent household … We need to make sure to put proper supports in place the same way we do in upper schools.”

Bowman also balked at considering a policy change midyear, without data. “We are not giving the community, administration and us an opportunity to look at data [to] see how this policy has impacted students over time.” Vice chairwoman Kathleen Kelly agreed.

Educators union president Dan Monahan also argued in public comment against changing the policy that night without adequate staff input. “I recognize the political landscape urges you to act quickly,” he said, but maintained that teachers have bristled at surprise policy changes such as the change in the attendance violation policy.

Student member Juliette Low Fleury agreed that referring the issue to the superintendent in lieu of immediate action “seems like a good solution.” She, too, wanted to see data that would inform her observations of arguments from student athletes. Some say “the only reason I have a 70 GPA is I want to play sports,” she said, while others “pick easier classes” to maintain eligibility, but “we need to see beyond anecdotes.” She wondered how many students may have lost eligibility because grades were docked by excessive absences or tardiness.

Salim also said that, though Cambridge voluntarily created a policy with higher grade cutoff than recommended by the Massachusetts Interscholastic Athletic Association, staff there had warned that “we have to stick to our standards” during a school year. Dexter was skeptical. “Are they saying that we can only change our own policy during the summer?”

Salim also urged that it was “prudent” to take a step back and get input from stakeholders and look at alternatives before reevaluating the policy.

Five of seven members voted to refer the issue to the superintendent. Kimbrough and Dexter voted against, clearly preferring to take immediate action, with Kimbrough arguing for immediate suspension if only because all entering first-year students playing fall sports are exempt from the policy (their GPA does not carry over from middle school), but students in spring sports are not: “If you play baseball, now it’s a different game.”

“It’s always the right time to do the right thing,” maintained Dexter, to no avail.

Afterward, the hockey player’s parents said they were not satisfied with referral to Salim, even though it was too late for a changed policy to help their son. “He has had weeks to look at this policy,” said Thomas Caterina, whose son was benched in early February. Family friend Laura McGaffigan complained that “No one is accountable.”

The failure of administration to respond to questions joined failures of teachers to grade efficiently, they said; of counselors or teachers warning the student; of staff members informing the parents; and of the supports outlined in the eligibility policy, they said.

“He is broken, and as a parent to not be able to help him, it is so hard,” said Annemarie Caterina of her son. He was never in trouble academically before this past semester, she said.