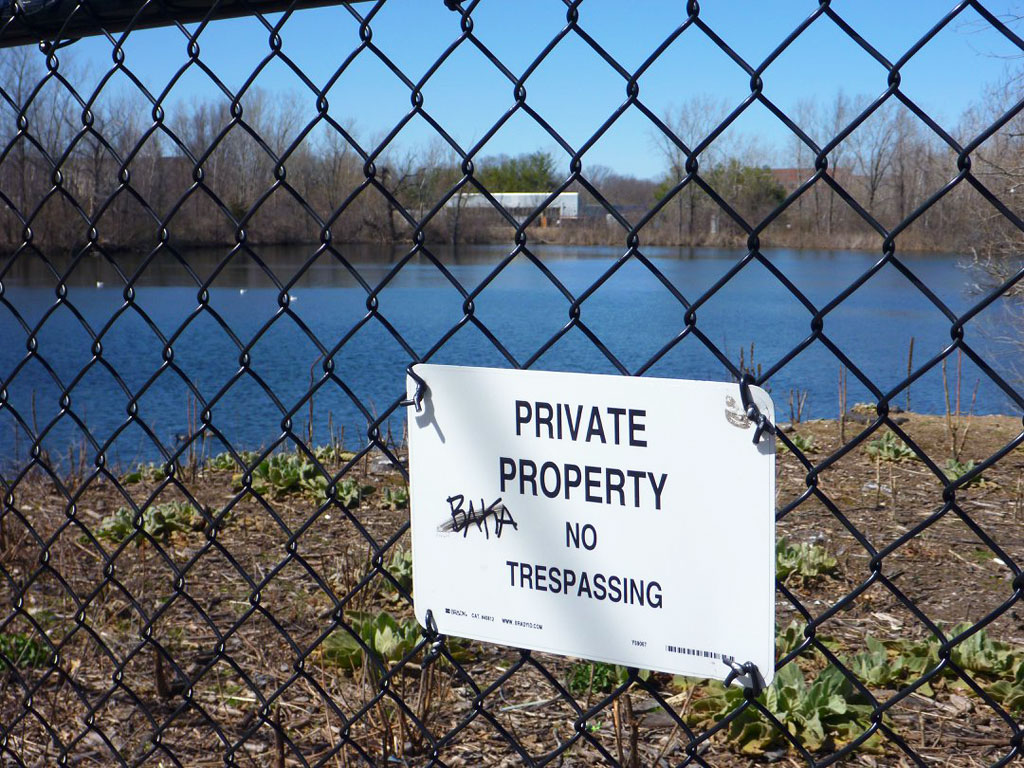 A frustratingly vague letter from the company GCP Applied Technologies suggests it might remake the Jerry’s Pond “property for business purposes” in development supporting its emergence as a new public company, and won’t cooperate with city efforts to clean away decades of contamination as it continues “to evaluate business options.”

But with many residents and officials wanting to see the pond remediated and returned to use – it was a swimming hole used by the public from 1913 to 1961, before it began six decades locked away behind a chain-link fence – the executive director of the Historical Commission said the company may have a hard time doing anything with it that departs radically from use as a green recreation area.

If someone moved to declare Jerry’s Pond a landmark that need would permission to alter, the commission would have to grapple with the pond being a less traditional structure than the buildings it typically oversees, but also one literally carved by human hands. Although the pond would put the commission in “uncharted territory,” said commission executive director Charlie Sullivan, there is a precedent in the recent restoration of Cambridge Common, which took place with the sign-off of commissioners.

“Whether the commission would entertain a petition to landmark it – it’d take a lot of thought,” Sullivan said of the pond. But he called it “an enormously valuable resource with great historical connotations, and a community landmark – with a small ‘l’ – for a long time. There’s a lot of history there, as well as it being a quasi-natural environment.”

Industry, recreation and wartime past

The pond was excavated for its clay as part of the local brick-making industry in the late 1800s, and was originally known as “Jerry’s Pit.” But after its business use, the City of Cambridge installed bathhouses and other amenities and ran it as a nine-acre city park that many living Cantabrigians still recall enjoying. Later it was used as a temporary barracks for returning World War II veterans, according to lore passed on by a residents group during presentations to groups such as the North Cambridge Stabilization Committee and in public interest drives.

The Friends of Jerry’s Pond has gathered 600 names on a petition to revitalize the pond, and says another 80 have written letters to GCP to urge action. An order by city councillor Sumbul Siddiqui in February looking for the city and the company to cooperate in a cleanup called its restoration “an issue of public health, environmental justice and social equity in Cambridge,” given that the inaccessible pond is the closest green space for between 3,500 to 4,000 people in the area’s affordable housing.

But the company’s letter and response to the city rejected involvement in getting a Targeted Brownfield Assessment grant from the U.S. Environmental Protection Agency to find out the extent of pollution at Jerry’s Pond and the cost to undo it.

The company is “showing no interest to be part of this,” City Manager Louis A. DePasquale, said Monday, explaining that the city can’t pursue the grant without the owner of the land. “I wish I had better news.”

Soil there is known to be contaminated with asbestos and naphthalene, but with no access to the pond, the city doesn’t know what is in the water. Siddiqui and councillor Dennis Carlone argued with DePasquale and city solicitor Nancy Glowa that the city should continue talks with the EPA about securing a grant, possibly keeping in escrow, saying the pond’s chain-link fence won’t stop inevitable floods from spreading the pond’s pollution into the surrounding area.

The company’s letter to the city manager was “disgraceful and vague,” Siddiqui said Monday. “They’d be happy with another 30 to 40 years of continuing this.”

Yet GCP, which makes construction products, boasts of being “good stewards of our environment” for good public relations reasons: It was spun off in 2016 from W. R. Grace & Co., which was found to have dumped dangerous materials illegally in Woburn in the 1980s, leading to a massive cleanup costing millions of dollars and a role as villain in the novel and film “A Civil Action.”

Eric Grunebaum, of the Friends of Jerry’s Pond group, said he too was perplexed by the vague but resistant tone of the company’s letter.

“We were all hoping that from that they would respond with something positive, that they would be energized to work with community and the city to do something about this,” Grunebaum said. “We really want to be positive about the future and not spend a lot of time bemoaning the past. Unfortunately, they so far don’t seem very interested in it – maybe they’re not ready to see beyond the dark legacy of Grace.”

“If they want to keep attracting and retaining a good workforce, I think being a good community member would be really positive for them, and we didn’t see that in their response – not yet anyway. I haven’t given up,” Grunebaum said.

Messages seeking comment were left this week with Karen Ethier, a vice president at GCP, but she did not respond.

Vision for the pond 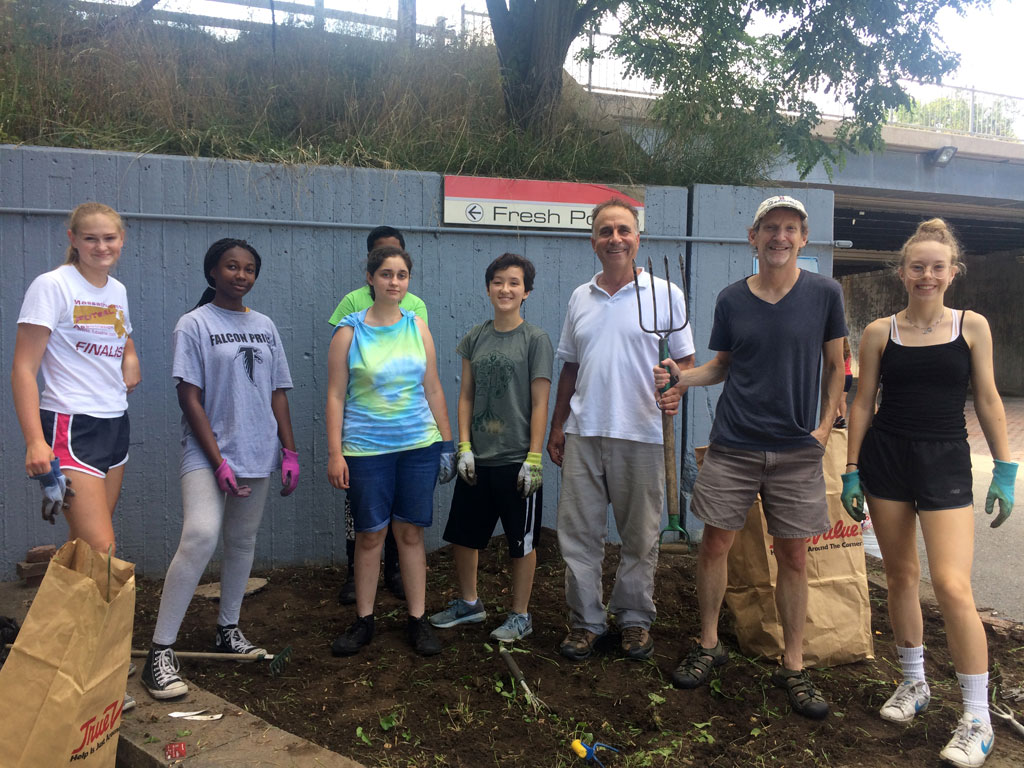 Beautification efforts around Jerry’s Pond taking place Thursday and the coming Monday include Eric Grunebaum of The Friends of Jerry’s Pond, second from left, and teens from the Mayor’s Summer Youth Employment Program, among others.

The North Cambridge company owns about 27 acres between Rindge and Whittemore avenues that could be developed, with the exception of the Alewife T station, some related property and a right of way through its land, while the Jerry’s Pond group is focused on about 37,000 square feet south of Russell Path that includes the pond itself.

While he’s been advised by a director of the Massachusetts Rivers Alliance that, whatever GCP envisions, “you can’t just fill a pond, even if it’s manmade,” the Friends’ initial vision for the pond itself calls for filling in about 50 feet of it to create a sloping entrance – as a quarry, the west side is essentially a straight line with a steep drop-off – with plants such as water lilies and reeds, leaving room for a bikeway and wider sidewalk and trees for shade, “making for both a better human ecosystem and natural ecosystem. In order to improve it, not to make it disappear.”

The area’s greatest natural assets, after all, have been crafted by human hands, he noted, such as Frederick Law Olmsted’s creation of the Emerald Necklace that includes Arnold Arboretum in Jamaica Plain and Boston Common and adjoining Public Garden.

The concept seemed in line with the thinking of Sullivan, from the historical commission.

“I’d be sympathetic to any effort to preserve and enhance Jerry’s Pond, because I think it’s an important part of the city landscape. As a citizen,” Sullivan said, “if push comes to shove, I’d try to protect it.”