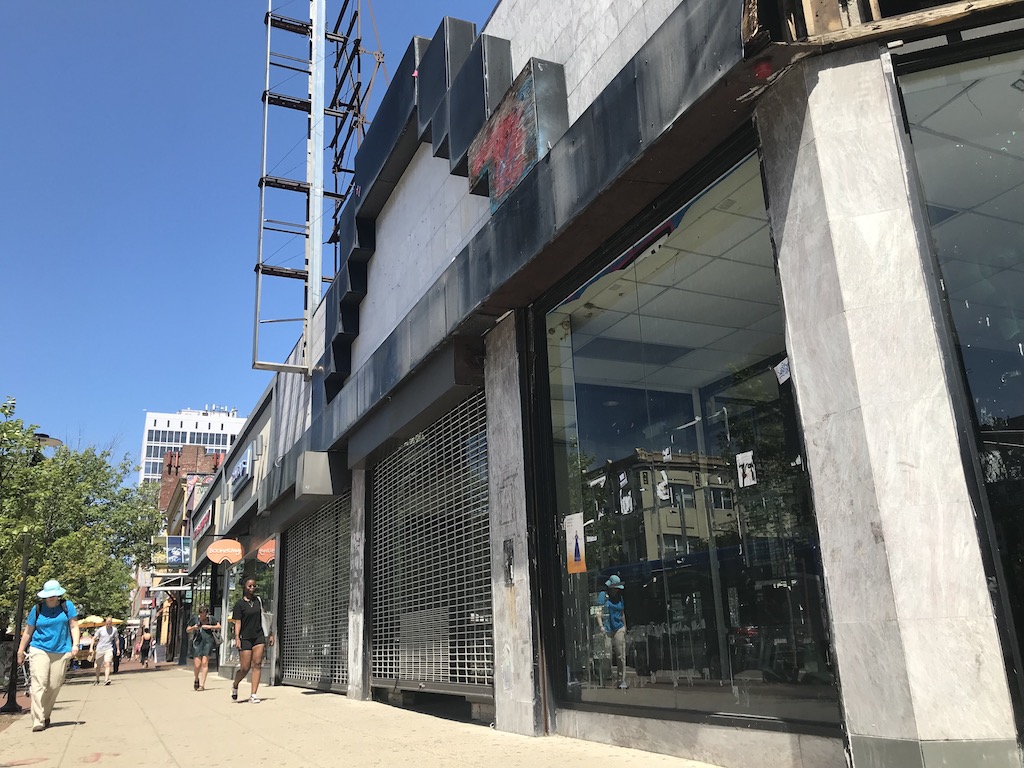 The former Blockbuster video and Out of the Blue Art Gallery space in Central Square – seen Aug. 2, before an artist filled the empty sign structure – could become a marijuana dispensary. (Photo: Marc Levy)

What laws will shape recreational cannabis throughout Cambridge?

This will be a big meeting for the city’s cannabis ordinance, preparing the way for sale of recreational marijuana – among other things, setting proposed shops’ required distance from other sellers, as well as schools and other places kids may gather, and pinning down application requirements and special permit criteria. The board will also continue a hearing on a Hanover Co. residential project at 36-54 CambridgePark Drive in Alewife for 299 units of housing and ground floor retail, and look at some recreational and cultural uses around Kendall Square, including making a determination for uses at Le Laboratoire Cambridge at 650 E. Kendall St.

Is the old Blockbuster/Out of the Blue Art Gallery space becoming a marijuana dispensary?

Speaking of pot, this committee – which does large project review within the square and monitors progress for non-zoning recommendations from the 2013 K2C2 study – plans to review a proposal to put a Revolutionary Clinics marijuana dispensary at 541 Massachusetts Ave. That’s the former Blockbuster video store that hosted the Out of the Blue Art Gallery until December.

The committee meets on the second floor of the City Hall Annex, 344 Broadway, Mid-Cambridge.

How do we save our urban forest to help handle climate change?

This group is getting started on a strategic plan to evaluate, maintain and expand the city’s green space, enabling it to be more resilient to climate change by reducing the urban heat island effect and mitigating stormwater and nutrient runoff, as well as contributing to “community well-being.”

The task force meets in the Media Cafeteria of Cambridge Rindge and Latin School, 459 Broadway, Mid-Cambridge.