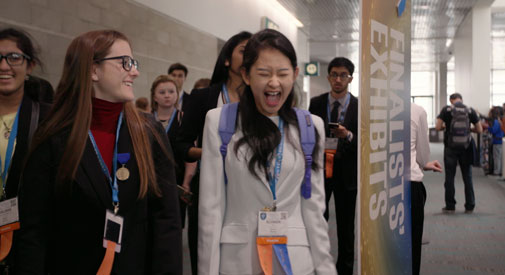 The sixth annual Boston International Kids Film Festival, kicking off Friday, has five features for the younger set, as well as a student films. Locations around town include the Somerville Theatre, Lesley University College of Art and Design and Massachusetts Institute of Technology.

The slate diverse in subject and age appeal. Saturday, “Wally’s Opening Day” at Lesley is an animated film following Red Sox mascot Wally and his sister Tessie, including through spring training and the Home Run Challenge. The mascots will be on hand for photo ops, and there will be a breakout workshop session to look at 2D stop-motion animation.

Also on Saturday is “Science Fair,” showing at MIT, which follows nine students’ quest to compete at the International Science and Engineering Fair. Cast members will be in attendance.

Other features include “Making the Grade” and “Tia and Piujuq,” both at Somerville, but the standout film of the festival for slightly older attendees is the critically acclaimed “Eighth Grade” (also at Somerville), directed by first-time filmmaker and Hamilton native Bo Burnham, about an introverted teen (Elsie Fisher, in a breakout performance) dealing with trying to be cool and her single dad’s awkward rearing methods. Actress Catherine Oliviere will be in attendance for a Q&A.

On Saturday shorts and documentaries made by students will play at the various venues. For tickets and information, check out the festival website.