‘Eighth Grade’: Invisible girl makes her stand in a directing debut that grew out of YouTube 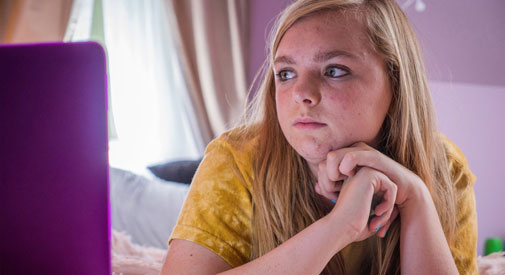 ‘Eighth Grade’: Invisible girl makes her stand in a directing debut that grew out of YouTube

Growing up and attending high school in the late 2000s, it was impossible not to hear about Bo Burnham, a YouTube star before it was something kids wanted to be when they “grew up.” Finding a fan base of similarly aged viewers who would follow him through his outrageous and introspective standup comedy, he now arrives as a bona fide film director who has knocked the seriously special “Eighth Grade” out of the park. Burnham, with the help of leading lady Elsie Fisher as Kayla, has created something tauntingly authentic and visceral. The film asks us – as we peer around our fingers, cringes permanently seared onto our faces – to remember exactly what it felt like to be in eighth grade with what felt like eternity ahead. 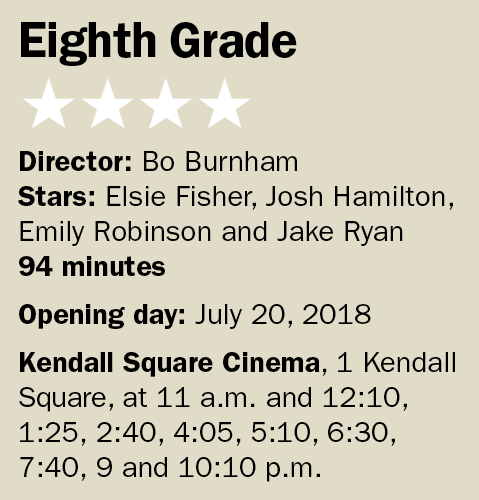 Kayla isn’t popular. She isn’t unpopular either, exactly; she’s the type of girl who will be voted most quiet, saying “nice job” to classmates who won “best eyes” in the same poll. Yet she doles out life advice on YouTube to a minuscule, at best, viewership. She’s trying her best, and while she isn’t bullied, she’s disregarded, something worse at that age – especially today, when the idea of being noticed and the need for instant affirmation can be oxygen for tweens and teens. In her last week of eighth grade before she heads to high school, Kayla enjoys ups and downs as she strives for social relevance, looks for a genuine friendship and endures one of the most hellish pool parties in memory.

Burnham’s script is airtight, to be expected, and the naturalism of his dialogue, especially between Kayla and her well-meaning dad, Mark (Josh Hamilton – charismatic), is increasingly hilarious as we watch him grow ever more perplexed over her erratic reactions. Where Burnham surprises is in his directing. He possesses a keen eye for how young teens see the world, everything bigger and broader or smaller and suffocating, and nothing in between. There’s a trip to a mall with friends that’s illuminated by neon flashing lights that captures perfectly Kayla’s feeling of freedom. Similarly, there’s the pool party sequence, which is shot as if it were a monster movie (not too far off-base) and allows her anxious energy to fester. Most impressive is a sequence in a car with a boy that begins innocently enough until it’s just Kayla and the boy and, all of a sudden, as the women in the audience holding their breath could attest, it turned into something straight out of a horror movie.

This is clearly a passion project for Burnham. What makes it such a blast to watch, and such an emotionally gratifying experience, is that he gives an internal story about one eighth-grade girl’s struggles as much vigor and intrigue as a superhero origin story.

“Eighth Grade” wouldn’t be the success it is without the perfect lead, and Fisher is perfect in her general physical demeanor and line delivery. Her physicality might be her greatest asset; we see the internal dialogue as she tries to move in ways that could make her more visible and popular, while also trying desperately to minimize the space she takes up by hunching and keeping her arms stiffly to her sides. It’s a fully realized and empathetic performance.

If there is one universality, it’s the belief that middle school is nothing short of an attack on our adolescence: four years when 10- and 14-year-olds coexist as their bodies implode, emitting a residue that’s pure acid for anyone and everyone around, and friendships develop and change, childhood confidence is ripped from us and we’re left with only enough energy to balk and stagger through a hellscape. Middle school is terrible. It was terrible when Burnham was just a YouTube personality and is likely even worse now, and the brilliance of Burnham’s script is that he understands that commonality between generations that help link those who grew up with social media and without. Technology maybe have changed since we were puttering around a school simultaneously too big and too small for our larger-than-life expectations but small world views, but that feeling of isolation and curiosity never leaves.