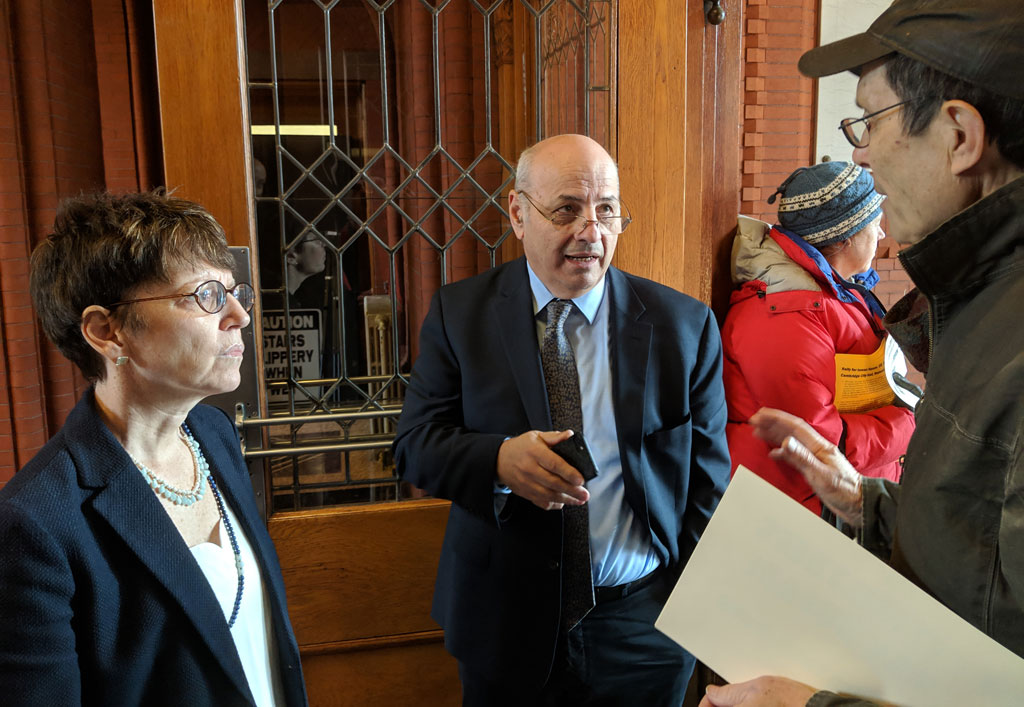 Deputy City Manager Lisa Peterson and City Manager Louis A. DePasquale talk with John Pitkin, a leader of the opposition against an Inman Square redesign, at a City Hall rally on Jan. 16. (Photo: Charlie Teague)

The Friends of Inman Square saw a victory from a Tuesday meeting with the city manager: a pause of uncertain length before reconstruction of the square begins, while the city’s Law Department confirms whether work can go forward without a special permit.

Five representatives of the Friends of Inman Square met at noon Tuesday with City Manager Louis A. DePasquale, Deputy City Manager Lisa Peterson and City Solicitor Nancy Glowa to make their case: The square’s Vellucci Plaza and its trees are zoned as open space, and city zoning law doesn’t allow relocating a street into open space without review by the Planning Board and Board of Zoning Appeal resulting in a special permit, said the group’s Jonathan Harris.

“The city has never sought Planning Board approval for the project, and no special permit has been issued,” Harris said.

The city manager indicated “that he took our concerns seriously” and needed more legal review, and no further work would be scheduled until a report back, Harris said. 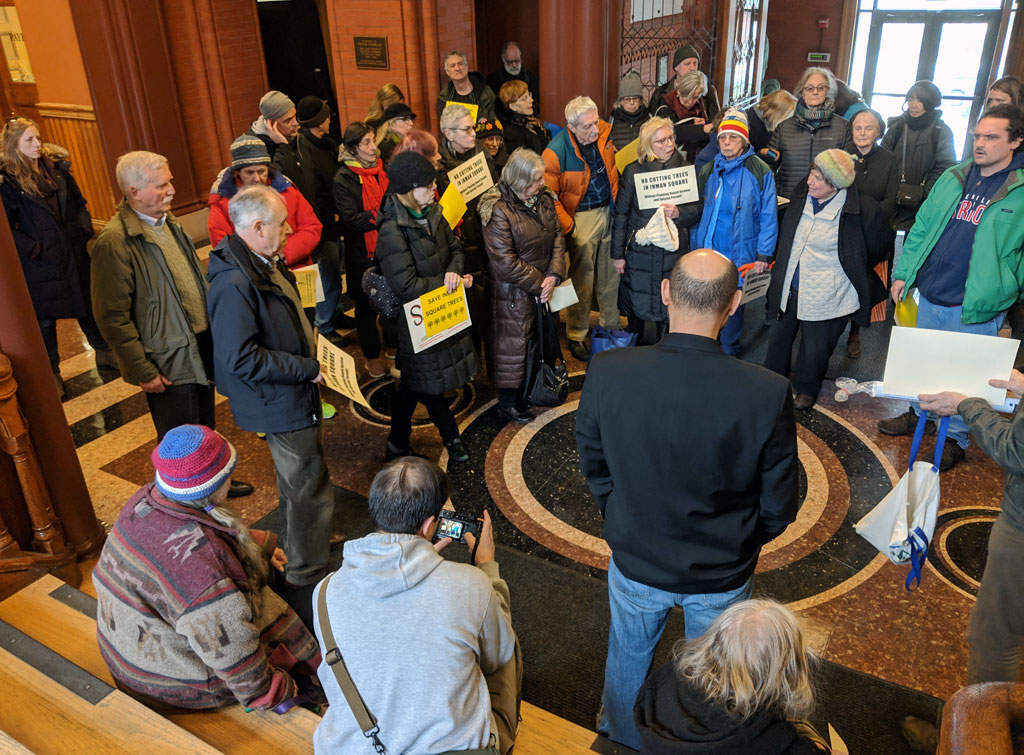 A Jan. 16 rally at City Hall was attended by 40 to 50 people, including city councillor Quinton Zondervan, seen with back to camera. (Photo: Charlie Teague)

City director of communications Lee Gianetti agreed with the description of the meeting, and said the legal review might not be ready by Monday’s meeting of the City Council.

“I don’t have a definitive timeline,” Gianetti said.

The two-year, $7 million change to Inman Square would split Vellucci Plaza in two, bending Hampshire Street through it to make an awkward, elongated intersection with Cambridge Street safer – essentially by turning it into two intersections. But opponents say the changes are not safer, and they oppose the destruction of four 50-year-old honey locust trees resulting from changes at the plaza.

A petition against the changes now includes 314 resident signatures, 118 of which are from Inman Square residents, as well as 14 Inman Square businesses, the group said. The petition is backed by a unanimous vote of the Mid-Cambridge Neighborhood Association.

A legal appeal was filed with the city Jan. 14, followed by a Jan. 16 rally inside City Hall when DePasquale promised to freeze work until the Tuesday meeting. That’s turned into the longer freeze while city solicitor Nancy Glowa reviews the city’s position.

The rally was attended by 40 to 50 people, including city councillor Quinton Zondervan, a tree advocate who took the opportunity to discuss his unpopular vote in favor of the Inman Square redesign, according to people who attended.

“So long as the city has not done due diligence to go through the proper process and obtain all needed permits, the project is at risk of being halted by further legal action,” Harris said. “Given the current concern in the city about loss of tree canopy, and the citywide protests about other recent tree removals, the city should not rush ahead with removal of mature, healthy trees in Inman Square until all necessary approvals have been obtained.”