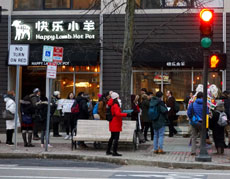 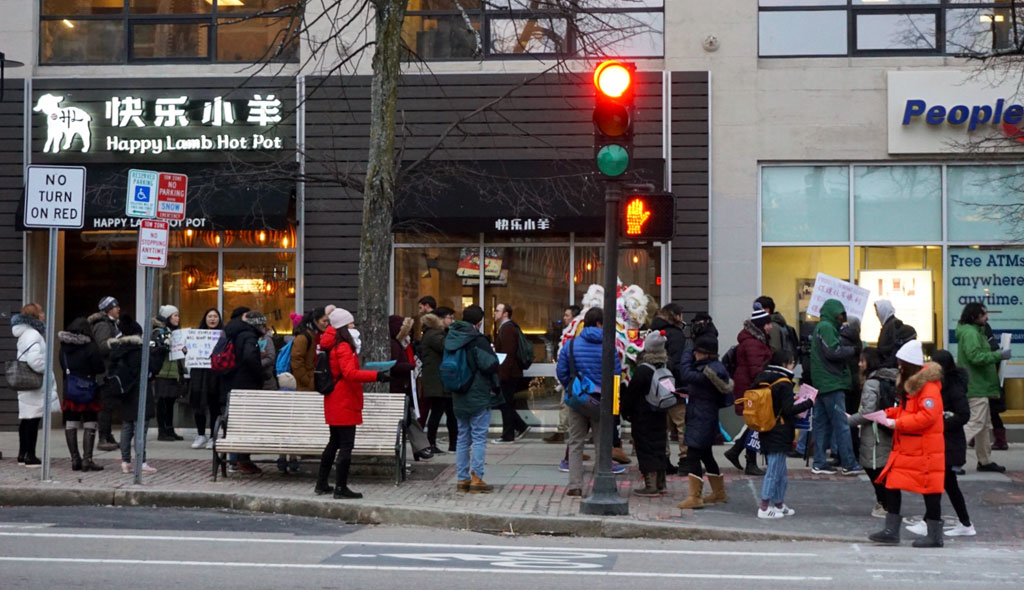 A frigid Wednesday night threatening snow didn’t deter about 40 to 50 workers and supporters, including officials from Cambridge and Boston, from assembling outside Happy Lamb Hot Pot in Central Square to protest alleged wage theft by management.

The rally aimed “to call attention to the pervasive wage theft, retaliation and abuse [workers] have experienced since working at the popular restaurant,” according to a Chinese Progressive Association press release. A legal action seeking an eye-grabbing $800,000 was filed late last year, based on triple damages for violations of failure to pay minimum-wage workers for labor and overtime, ignored sick time mandates, tip theft and retaliation against some plaintiffs, said Bethany Li, an attorney and director of the Asian Outreach Unit at Greater Boston Legal Services representing the nine Latino and Asian workers. The claim is “just at the beginning,” but lawyers have already “begun to exchange numbers” and negotiate with Happy Lamb management, Li said.

Happy Lamb Hot Pot, which opened March 2016 and operates under the umbrella of an international chain called Little Sheep Mongolian Hot Pot, is managed by northeast regional manager William Cheung. A second Happy Lamb Hot Pot opened in Chinatown in October. Li said it’s unclear if the restaurants are franchised, spun off or part of the bigger international organization.

Only one plaintiff still works at the Cambridge location, at 485 Massachusetts Ave., Li said. 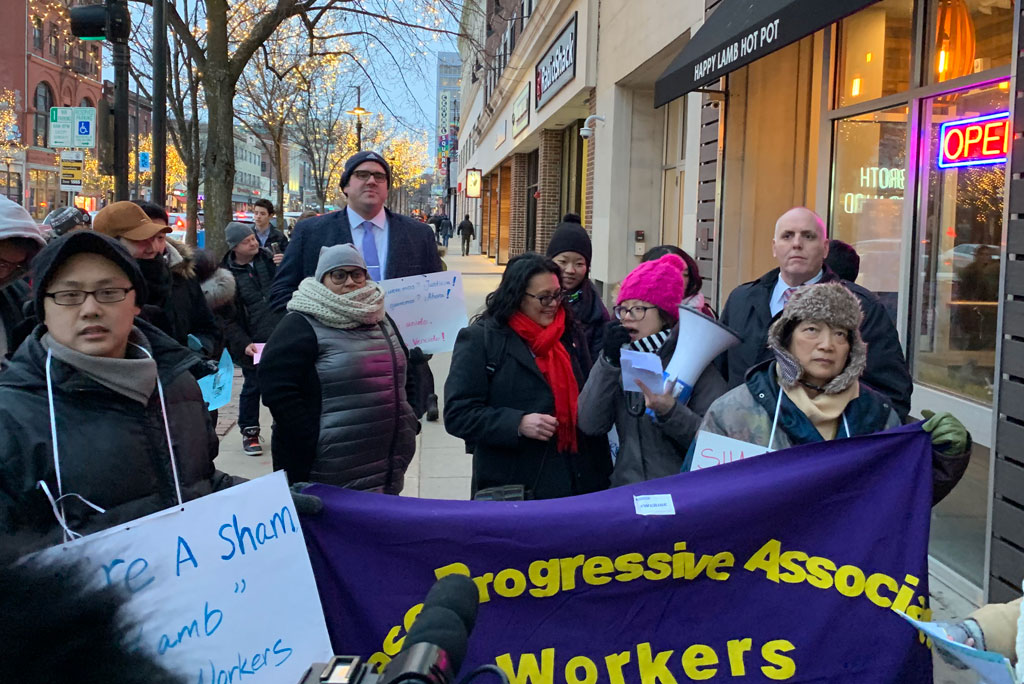 Happy Lamb’s culinary appeal is its assortment of boiling Mongolian broths used to cook ingredients at the table. Broths come mild or spicy, and diners can choose half portions for “the best of both worlds.” The main meat offering is lamb shoulder shaved thin, like prosciutto. There’s also beef, ox tongue and chicken – and Happy Lamb has a strong  4.5 rating on Yelp.

According to Li and Chinese Progressive Association executive director Karen Chen, the wage theft came to light during a legal clinic put on by Greater Boston Legal Services at the association’s center in Chinatown. Chen said there was real fear among many of the plaintiffs. One former worker cited being threatened by a butcher knife, and others who testified at the rally said they were subject to physical abuse.

The rally – headlined by the chant, “Happy Lamb, you’re a sham, treat your workers right” – also featured a festive dragon dancer in colorful garb and several members of Jobs With Justice, who marched and chanted in an elongated oval under the watchful eyes of bundled-up Cambridge police. Adding political clout to the proceedings were Cambridge city councillors Sumbul Siddiqui and Quinton Zondervan; state Rep. Michael Connolly; and Boston city councilor Ed Flynn.

Employees inside Happy Lamb seemed unfazed, though some early diners and passers-by seemed impressed and amenable to taking fliers calling for “justice” in English and Spanish. Attempts to reach Cheung or other management for comment were unsuccessful before and after the rally.