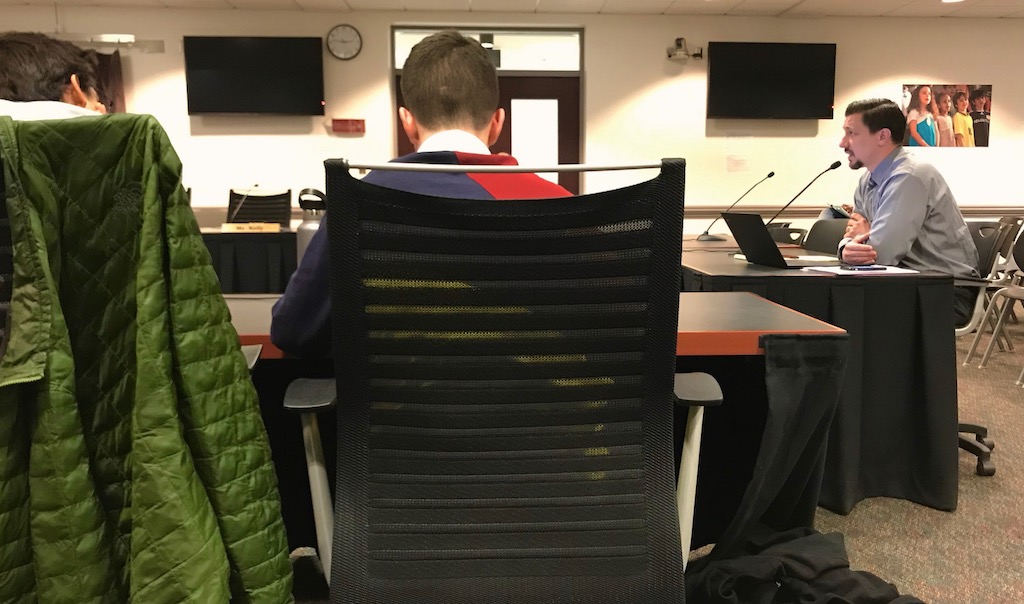 The work of keeping kids eligible to take part in high school sports could grow into something much bigger, incorporating attendance violations and other ways to support students falling behind, officials said Tuesday.

Though they gathered for a simple check-in on a broader probation policy adopted in December and starting with spring sports, the idea of expanding academic eligibility help arose in several ways, with the idea of a task force mentioned repeatedly – along with repeated hints that the meaning of grade points themselves should be on the agenda for discussion.

“There’s certainly work to be done on procedures and practices, but we’ve moved forward,” said Patty Nolan, leading the meeting of a School Committee Athletic Eligibility Ad-Hoc Subcommittee in the absence of Laurance Kimbrough. She said she was looking for “a sense of whether next year there needs to be adjustments, which doesn’t mean there wouldn’t be a task force – that seems to me to be a larger issue.”

“We talked a lot about this being only about student athletes,” Nolan said. “We want to ensure that safety net is there for all students.”

Lengthy and passionate testimony and debate last year resulted in students whose grades plunged to a 60 out of a 100 grade point average being able to stay on probation in the sports program to improve, rather than be removed entirely. Committee members voting for it knew it applied to relatively few students – between seven and 10 was the guess from high school athletics leaders. On Tuesday, they learned that a mere four students would have been affected in the winter term.

Where students’ struggles alert adults and bring support was among the changes being looked at. Sixty to 70 is the current grade point average probation zone; a student triggers support radar at 75, said Cambridge Rindge and Latin School director of athletics Tom Arria.

“If that number went up to 80, how many more kids would be on the radar?” asked Elizabeth Liss, educational liaison to Mayor Marc McGovern.

“There were quite a few students who were identified at 75,” Arria said. “If we want to make that number be 75 to 80, that’s going to be another whole group.” Another 60 students would appear on the radar as struggling and needing support to remain safely among the players for 40 sports teams at the high school participating in a collective 20 to 40 events a week, he estimated.

But growing the number of students needing support would mean needing more people providing support, warned Arria and high school principal Damon Smith; while the possibility of deans getting involved was appealing, it was the inclusion of coaches on the subcommittee or task force that seemed vital – with the complication being calling on coaches to attend meetings when they’re supposed to be out coaching. Support staff paid with stipends was cited as another topic the subcommittee or task force could consider.

The task force idea was popular, since a subcommittee membership is limited just to committee members. It also was eyed as a way to look at broader issues, including whether the values placed on grade points were meaningful.

“There’s a larger conversation for our school community about grades in general. There’s a tension  point that I would ask our students to think about: the threshold of a 70, and what goes into a 70 GPA … at CRLS right now, Fs are graded numerically at 50s. From a 50 to a 70 is a 20-point differential, but in actuality every student who has an F – and there aren’t many, and I’m not saying we should have more – may have had performance lower than that 50,” Smith said. “It’s a larger conversation that has to include deans and teachers about grading. It’s a whole different but related topic: What’s in that grade?”

The one current coach who appeared at the Tuesday meeting, former mayor and state representative Anthony Galluccio, agreed there was work to do around grade points as well as on when it was identified a student athlete needed help. They may be flagged at a 75, but “kids I’m working with aren’t going to get into state schools at less than an 80, in large part,” said Galluccio, an assistant football coach.