Passions over most vulnerable students, race are big in revote of sports policy affecting few 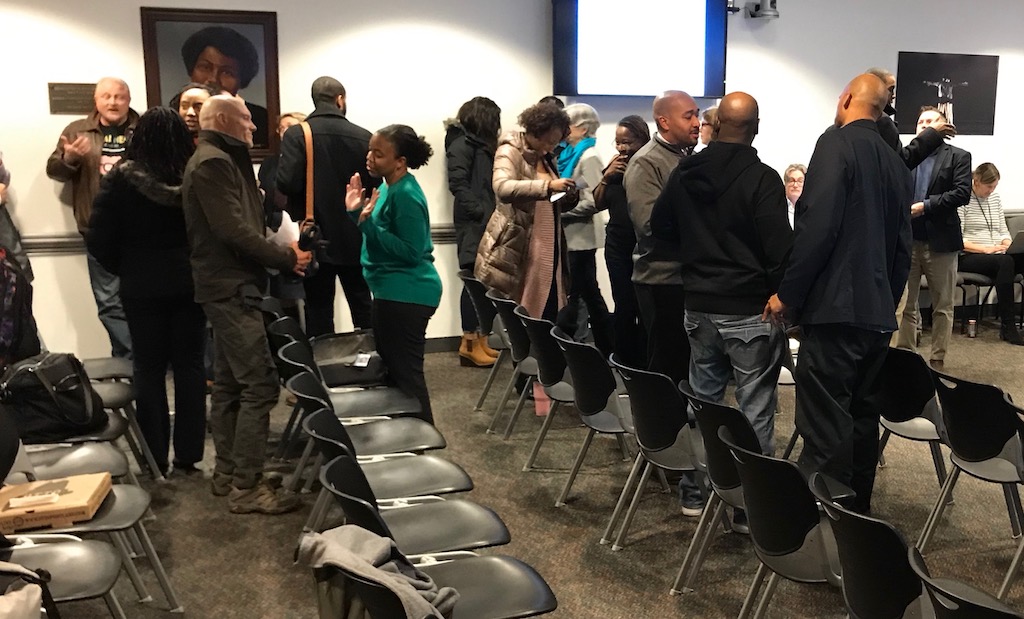 Passions over most vulnerable students, race are big in revote of sports policy affecting few

Bringing back a high school sports academic eligibility order for a revote increased support for the proposal Tuesday, leaving only one member of the School Committee opposed.

The order means that students whose grades plunge to a grade point average of 60 out of 100 can stay on probation in the sports program rather than be removed entirely; though they still cannot play in games and must act quickly to raise their grades out of probation, they will get the benefit of coaches’ help and the knowledge that they can return to full team membership with enough effort. The lowest grade point average accepted now is 67.5; the change, which affects fewer than 150 students overall and perhaps only a couple of dozen troubled student athletes, will take place for the spring season.

The 5-1 vote (Laurance Kimbrough, the maker of the original motion, expressed public regrets for having to miss the meeting) pleased at least three-quarters of the citizens who came to speak publicly on the topic – a polite debate of heartfelt and even tear-filled personal stories from Cambridge Rindge and Latin School alumni, educators and people of color, with some of the speakers being all three.

“At one time, I was myself on academic probation. Like many of my student athletes I coach today, I grew up in public housing and often suffered food insecurity [and] when those troubles started to creep into my academics and my grades started to slip, it wasn’t my guidance counselor or my dean or my teachers – as great as they were – who helped me navigate out of troubled waters. It was my coaches,” said alum Nikolas Emack-Bazelais, who went on to play soccer while graduating Emerson College at the top of his class and now coaches a CRLS soccer team. “I think back to … how different my life would have been if I had lost access to the very support system that made me the man I am today.”

Though an amended version of the order passed 5-2 in November and technically only voters on the prevailing side are supposed to be able to call for reconsideration of a vote, a failure of School Committee rules to spell that out allowed two members on the losing side to bring the issue up anew Tuesday: Fred Fantini, who said he wanted to reconcile the order with Massachusetts Interscholastic Athletic Association rules and have a “fuller discussion”; and Manikka Bowman, who said Kimbrough’s order “was written in a way that was sloppy,” without talking about the processes and support that would raise a kid out of probation.

Between the two votes, Bowman wrote an essay for the Cambridge Chronicle that described Kimbrough’s order as getting a 4-3 vote and with a misunderstanding: that it “lowers the eligibility requirement to allow kids with a D- average, who were previously ineligible, to participate in sports while on probation.” But the expanded discussion Tuesday didn’t change her views enough to change her mind, and she continued to vote against the expansion of probation. (She was joined in opposition by city councillor E. Denise Simmons and former School Committee member Richard Harding, who spoke during public comment.)

The changed vote was from Fantini, who spoke admiringly of the young graduates who came back for public comment, saying “it was worth the reconsideration to hear from all of them. It was really very moving.”

Academic standards are next

The testimony also struck member Patty Nolan as being particularly powerful. “I still support it, in fact, even more fervently,” Nolan said of the order, though she blamed herself for helping tighten probation standards a decade earlier in a failed attempt to raise standards and said it was “shame on us” as a committee for not having adequate student supports in place or acting on the issue faster.

“Not passing this is not magically going to change [student supports] – it’s actually just going to keep a bunch of kids from whatever supports there are in place,” Nolan said.

But she said academic rigor across the board were too low, and the two-meeting conversation on eligibility and probation were “a lot of time on something that affects a few kids”; she said she hoped as much attention or more was given when it came time to talk about those standards. Mayor Marc McGovern, who leads the committee, agreed, saying of the eligibility debate: “While we nibble around the edges about should it be a 65, a 64, a 63, we’re not having the real conversation we need to have.”

Passions were high for a topic in which race played a prominent role, and McGovern, Nolan and Bowman clashed over it.

In the first exchange, between McGovern and Bowman, the mayor called out the committee member for misrepresenting what happened at the November meeting – “Words do matter, [and] saying that we lowered the standards for kids to play is not what we did,” he said – and returned to an issue that had been brought up in June, but only briefly: that academic eligibility standards applied only to sports, which on Tuesday had brought out a large number of people of color to give testimony, but not to other extracurriculars such as theater. “We’re always trying to ‘engage kids’ and show them how we ‘care about them,’ and yet in athletics we have an incredibly punitive system. You fall one decimal point behind, you are gone,” McGovern said. “Doesn’t happen in theater! Doesn’t happen in band. People want to talk about race – I wonder what would happen and how this room would look if we started to say ‘You gotta be above a 70 to be in a drama production.’ We don’t do that.”

McGovern explained that he was talking about the difference in how standards are set, and the meeting moved on – but during an entirely separate agenda item, a presentation on a grant for “Building Equity Bridges,” Bowman brought up race again.

Will of the people

She suggested that the mostly white committee had ignored the will of the people in approving the academic eligibility order.

“It’s not lost on me that we just had a debate and people of color from different vantage points came and had serious concerns … and this committee just moved forward with the decision that was already made up in their mind and did not listen to some of the parents that came here,” Bowman said. “I think it happens at the School Committee level, because we heard it tonight, it happens in our classrooms – our educators say it, our kids say it – [systemic] racism isn’t just about someone saying the N-word … if this body doesn’t take a step back to see how we perpetuate that, I just think it’s highly problematic.”

Kimbrough, the writer of the order, is himself a black man whose entire platform as a committee candidate and focus as a member has been to dismantle the white supremacy he sees inherent in Cambridge Public Schools. But the order had also been supported by a large majority of people of color during public testimony, Nolan noted, including every person who had direct, ongoing contact with students.

“I listened really carefully to people who were here, and a range of people from a range of backgrounds encouraged us to do what we ended up doing,” Nolan said.

Ad hoc group will carry on

The committee has created an ad hoc group that discuss eligibility issues and support for probationary students, and committee vice chair Kathleen Kelly told the audience filling the room that she hoped speakers would continue the conversation as participants. The idea generated a murmur of support, and among those indicating he would take part was Cambridge police officer Michael “Whitey” Daniliuk, who had come to the meeting to speak in favor of broadening the probationary standards based on his own experience watching friends who had been uninterested in academics but were mentored into success by coaches.

But he is also an officer in the police department’s youth and family services unit, which he noted has a lot of intervention techniques and programs for kids who struggle, including those for whom home might be the worst environment to be in. “We surround the kids with services,” Daniliuk said.

“It’s a strange thing in the city where the police department has a bit more of a progressive stance than the school department when kids find themselves in trouble,” he said.