‘Climax’: Oh, Noé, the drinks have been dosed and the dancers are all too disturbingly into it 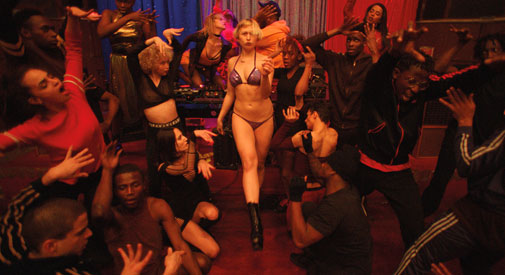 ‘Climax’: Oh, Noé, the drinks have been dosed and the dancers are all too disturbingly into it

No, “Climax” has nothing to do with the New England Patriots owner and a brothel in Florida. It’s just the latest from take-him-or-leave-him French provocateur Gaspar Noé, of such haunting and stylish depictions of depravity as “Irréversible” (2002) and “Enter the Void” (2009). The former revolved around a brutal rape in a dingy Parisian underpass, while the latter unfurled a techno-charged odyssey about a soul seeking rebirth after drug deal gone wrong in the bowels of Tokyo. Here, Noé gives us a dance party that goes wildly off the rails and beyond. 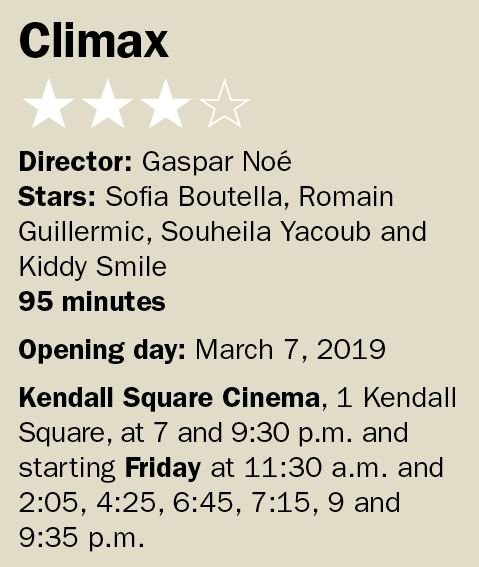 “Climax” is disorienting on many levels. It begins with a blank white screen, and you half expect credits to roll before a woman in a sleeveless leotard staggers into view. It’s a top-down shot, and you realize she’s trudging through snow – and surely must be freezing. The camera zooms in and we hear wails of pain and see faint traces of blood smeared across her arms. Is it hers, you wonder, as she falls into the whiteness, writhing and contorting, creating the imprint of a bloody snow angel. Then the credits do roll. What’s this? Did someone queue the film up wrong?

It’s the only outdoor scene in the film, and an apt encapsulation of Noé‘s envelope-pushing style and its ability to pique, unsettle, enrapture and linger. After the credits, the film cuts to an old boob tube playing VHS audition tapes of dancers with names such as Cyborg, Psyche and Gazelle who tell the camera why they love to dance and want to be part of a troupe heading out on tour. Packed tightly around the television are DVD binders of “Salò, or 120 Days of Sodom,” “Suspiria,” “Taxi Driver” and similarly macabre flicks. It’s a pretty good indication of where this is all going – kind of.

Finally we meet the dancers in the flesh, at a remote, snowed-in dance school. The troupe’s in the midst of a raucous, voguing dance-off that’s captured in a impressive long track worthy of comparison to the “La La Land” opener. Many of the dancers whirl about so energetically, precisely and effortlessly that they seem double- or triple-jointed, and you wonder how long they can keep it up. The answer: so long it becomes as exhausting as it is enthralling. When the dancing’s done, we get to put some names with the faces. Selva (Sofia Boutella, the dark-eyed spy from “Atomic Blonde”) is the stern choreographer; Emmanuelle (Claude-Emmanuelle Gajan-Maull), ostensibly higher up in the troupe’s administrative hierarchy, has made the unwise decision to bring along a child (Vince Galliot Cumant). There’s a feral, hedonistic tang (hello “Suspiria”) in the air, underscored by some dancers’ brash talk about where they’d like to insert their manhood in their female or gay counterparts. Yeah, we’re back in time, there’s no cellphones and #MeToo is almost 20 years out.

What sends the evening over the edge is a couple of tabs of LSD someone has dumped into the communal punchbowl. Nobody really knows who did it, but soon folks are acting on bloodily bacchanalian impulses, and worse. If things aren’t tense enough, the power goes out and hyperparanoia kicks in. This is where Noé sharpens his knife and the evening descends into derangement.

The actors, mostly professional dancers, seem quite natural. What goes on feels mostly improvised, with Noé trying to ratchet every frame for maximum tension. In short, it’s a riveting spectacle, even if many of the self-interested players are hard to root for. The soundtrack and the red-infused camerawork by Noé’s longtime collaborator, Benoît Debie, are paramount to the film’s success, which hangs mostly on atmosphere. As the acid kicks in (and the power dies) a mangled distorted version of Soft Cell’s “Where Did Our Love Go” echoes through out the cavernous halls from a boombox and the film ends with an eerily muted version of the Rolling Stones’ “Angie.” You’ve never heard these songs like this before, both grotesque and alluring, and a pleasing break from the pulsating tempo that dominates the rest of the film. The comedown at the end is sobering and shocking, but primarily “Climax” is all about the trip.