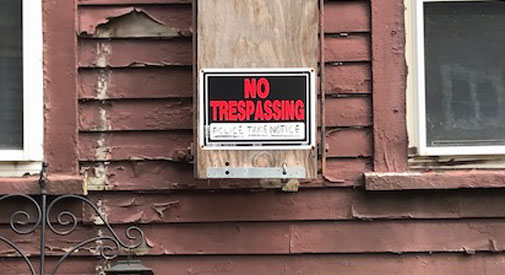 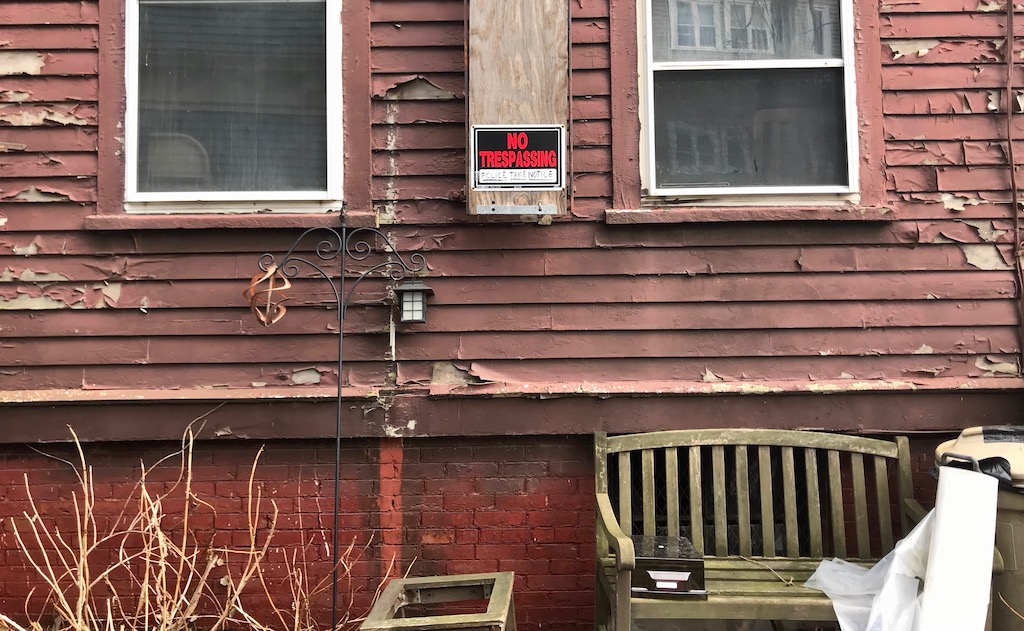 The empty residential building at 12 Arnold Circle bears a warning to keep out. (Photo: Marc Levy)

The city is opposing a deal by the owner of a deteriorating 12-unit apartment building in Mid-Cambridge to sell the property to a developer. Instead, the lawyer for Cambridge wants a court-appointed receiver to exercise his authority to immediately repair the “dangerously distressed” building at 12 Arnold Circle.

The city’s filing Wednesday in Middlesex Superior Court added another layer of complexity to legal proceedings that started in 2011 when city fire and building inspectors found owner Kenneth Krohn and his wife living alone in the building with “combustible materials” – mostly Krohn’s papers and books – filling most of the space from floor to ceiling. They ordered Krohn to clean it up.

Despite cases in three courts over the past three years – federal, state and most recently Land Court – Krohn has made “little progress” in correcting violations and the building’s condition is still “a very serious public safety issue,” the city’s filing said. In May a rotten tree on the property fell on a neighboring building, causing damage. Neighbors and their insurance company are still seeking reimbursement from Krohn and the receiver, the city said. 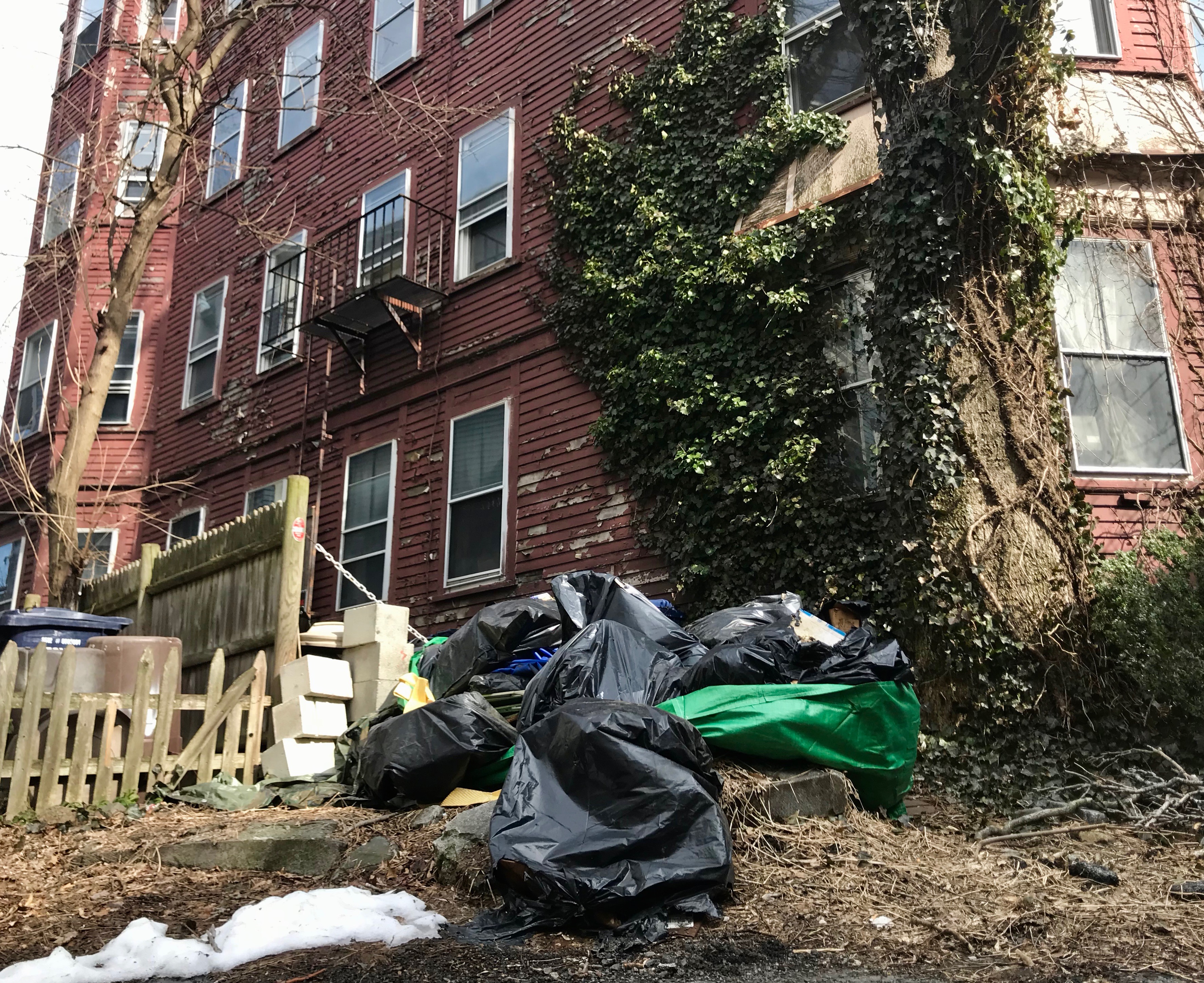 Various efforts to clean, clear out and maintain the property have been abandoned for months and, in some cases, years, neighbors say. (Photo: Marc Levy)

Firefighters wouldn’t be able to go inside 12 Arnold Circle in an emergency because of structural damage, the city said. Krohn acknowledged he has no liability insurance on the property and that smoke and heat detectors aren’t functioning since the city ordered power to the building cut in 2012.

Krohn had agreed last year to sell the building to Cambridge developer Sean Hope for as much as $5.4 million, but that deal foundered when the city’s Board of Zoning Appeals in November upheld a ruling by building officials that any development would have to include 20 percent affordable units under the Cambridge affordable housing ordinance.

A second developer, Edward Doherty of Danvers, has agreed to buy the building. That deal calls for Doherty to pay $4.6 million if Krohn fails to win an appeal of the BZA ruling in Land Court and the building must include affordable units, according to court documents. If a Land Court judge overrules the city board, Doherty will pay Krohn an additional $1 million.

The city objects to the Doherty deal because it doesn’t include any “provision for remediation of this dangerously distressed building” before the sale closes or while the court cases continue, the city’s court filing said. According to the agreement between Krohn and Doherty, they have at least 90 days to close the sale; Doherty’s offer of an extra $1 million will remain good for another 18 months after the closing, while the Land Court proceeding plays out.

Krohn filed a response to the city Friday saying Doherty would start “remediation of the various violations of the municipal code” as soon as the sale closes. Krohn said that would occur 91 days after the court approves the sale and would be the fastest way to eliminate the violations.

Going on the offensive, Krohn said he would contest neighbors’ claims of damage from the fallen tree. He also suggested that the city is trying to delay the sale so a building permit application occurs so late that he won’t have a legal defense against the affordable housing ordinance, preventing him from collecting the extra $1 million.

Held the city at bay

Krohn, 80, bought the building in 1974 for $95,000 and has said that as tenants moved out, he began using the space to house his large collection of possessions. After the city ordered utilities cut, he and his wife moved to an apartment in North Cambridge. He has contended that he doesn’t have the money or the physical ability to meet the city’s demands for repairs.

Krohn has degrees in mathematics from Harvard and Massachusetts Institute of Technology and started a successful software business that he sold at a profit in the 1970s. He also served three years in federal prison after pleading guilty to extortion and conspiracy in 1977 in a case involving a failed loan to a Mexican businessman. After his prison term, he obtained a law degree but couldn’t practice law, partly because of his record.

But Krohn has held the city at bay since it filed suit in 2016 seeking to force him to correct violations at his building. He lost a bid to prevent a federal judge from putting his property in receivership, but the receiver, Daniel McAuley, a Woburn lawyer, has not exercised his power to do repairs or sell the building to a buyer of his choosing, according to the city’s filing Wednesday.

The city also said McAuley hasn’t “fulfilled his responsibility” to respond to claims from neighbors whose property was damaged by the tree and from their insurance company. McAuley was supposed to obtain liability insurance and should have filed an accounting of his costs, the city’s filing said. Krohn defended McAuley’s performance in his response.

The city and Krohn agreed that McAuley must sign off on any sale. According to Krohn, McAuley told him that he cannot approve a sale without authorization from the court.

McAuley himself has been silent in the case. He didn’t respond to the filings in Superior Court and has not submitted regular reports since September, the city said. Messages left at McAuley’s office by phone and email in the past two weeks got no response.