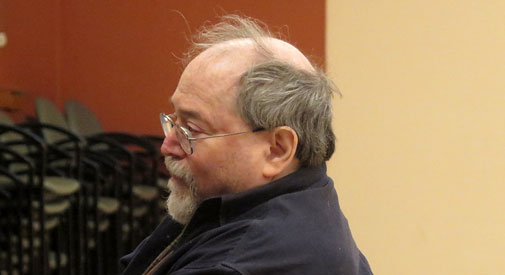 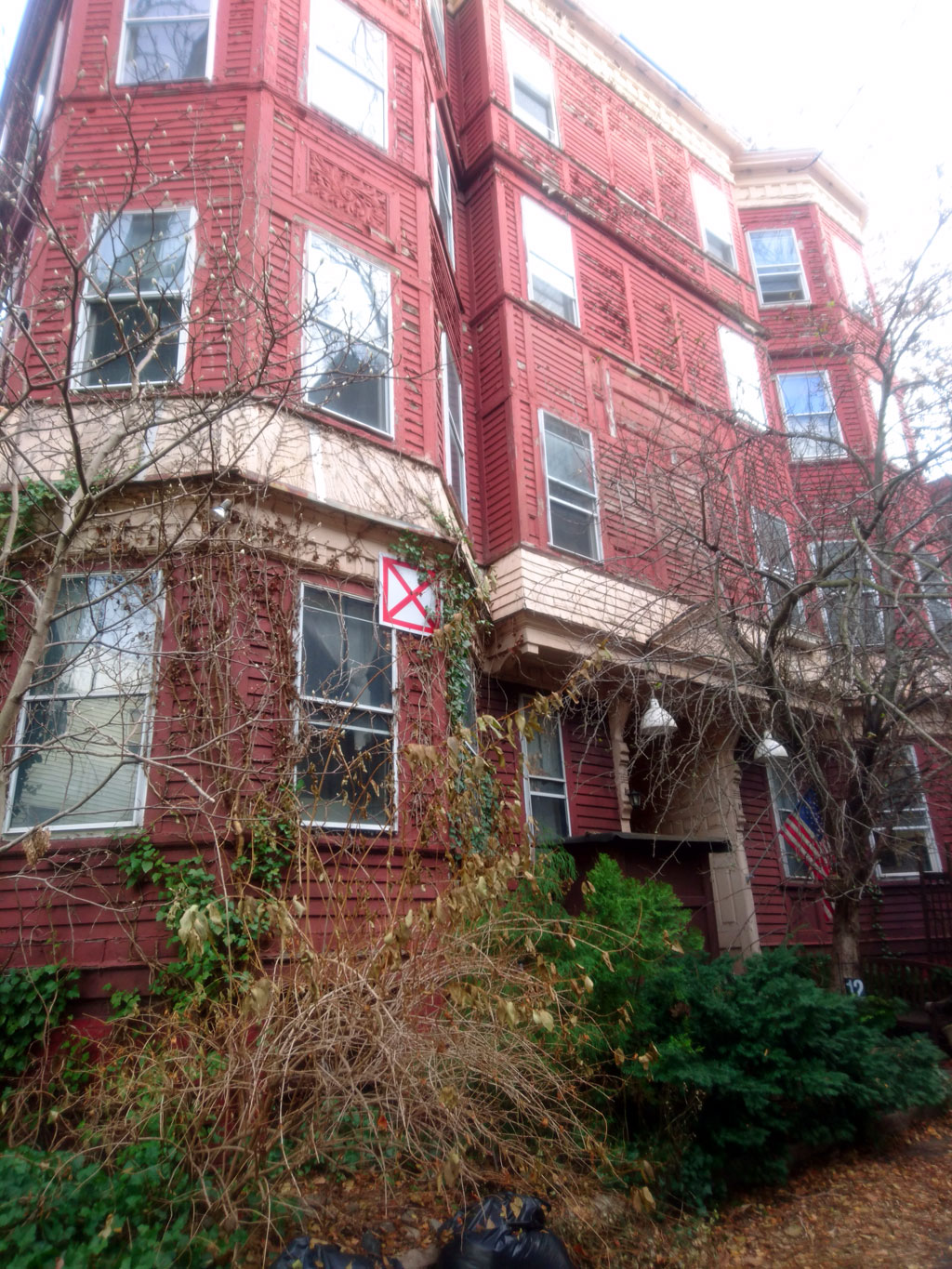 The four-story apartment building at 12 Arnold Circle near Central Square, empty since 2012 and now fated to stay empty for longer. (Photo: Sue Reinert)

The four-story apartment building looms like a haunted house at the end of a cul-de-sac off Massachusetts Avenue, three blocks from City Hall. It has been unoccupied since at least 2012, city officials say; for many years before that, the owner and his wife were the only ones living in the 12-unit structure.

The owner wants to sell it to a developer, but the city has been battling with both over the scope of Cambridge’s new inclusionary housing ordinance.

The sticking point: Is the proposed project at 12 Arnold Circle covered by the new rule?

On Thursday the Board of Zoning Appeal answered with a resounding yes, unanimously rejecting an appeal by developer Sean Hope. Hope, backed by building owner Kenneth B. Krohn, had asked the board to overrule a February decision by the building commissioner that his project had to comply with the ordinance requiring certain new residential construction to set aside 20 percent of units for low- and moderate-income residents – a surprise to Hope, considering the commissioner’s indications up to then that it wouldn’t apply. 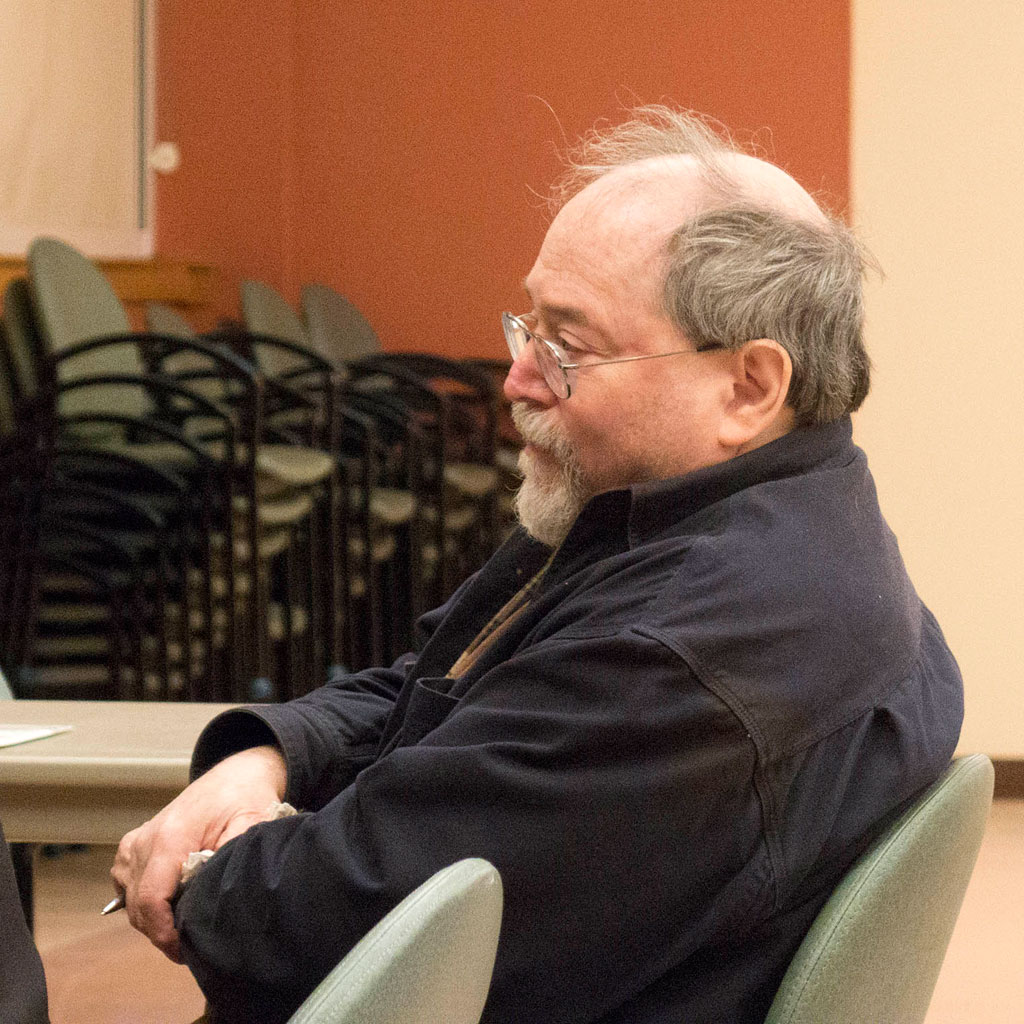 Kenneth B. Krohn, owner of 12 Arnold Circle, listens during Thursday’s meeting of the Board of Zoning Appeal. (Photo: John Hawkinson)

The board decision is probably not the end of the battle. Lawsuits over the building remain in federal and state court. As board chairman Constantine Alexander said shortly before the vote: “We’re going to render a decision. Then the legal process will take hold. How long it takes, we can’t control.”

During the long dispute, a rotten tree on Krohn’s property crashed onto the neighboring condominium building at 10 Arnold Circle and the yard and patio of 15 Lee St. on May 4, damaging the roof and several units. Several owners came to the Thursday board meeting to plead for a quick resolution of the battle. They’re not only on the hook for thousands of dollars in repairs, but the 10 Arnold Circle condo association’s insurer won’t renew its policy because of the “unsafe condition” of Krohn’s property, they said.

The battle is over two units of affordable housing. It’s also about money. Krohn, 80, who has a wildly improbable background that includes a doctorate in mathematics and three years in federal prison for extortion, bought the building in 1974 for $95,000. At one point he stood to collect $5.4 million from Hope if none of the units had income restrictions, according to documents filed in court and in the board case. That was if a sale had closed by May 25.

It didn’t, and it’s not clear whether Hope would be willing to buy in any other circumstances, or what he would pay for the building with two affordable units – certainly less, according to Krohn. Both men said after the board decision that they continue to negotiate. 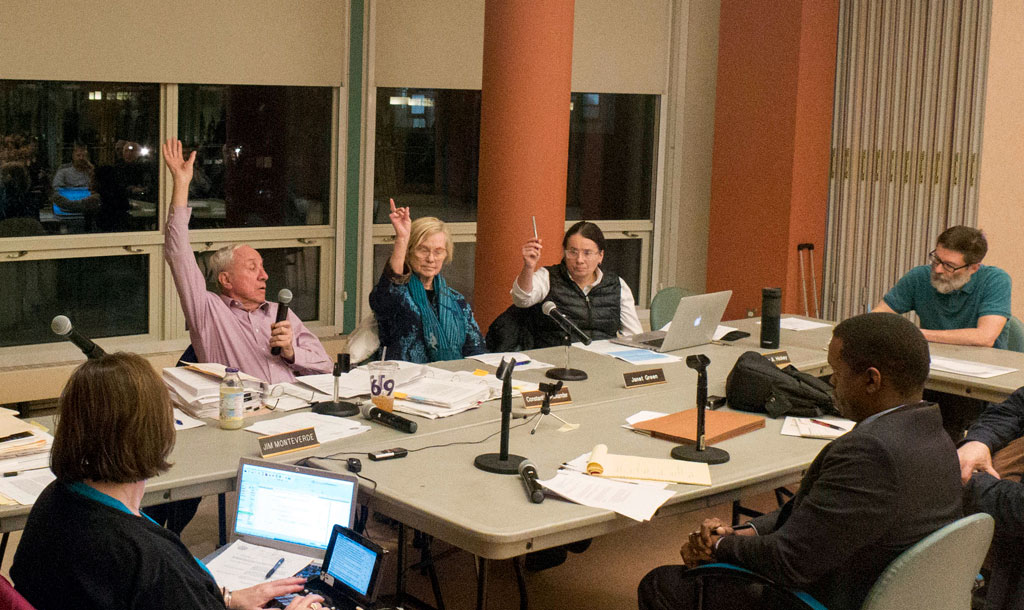 The Board of Zoning Appeal votes Thursday, rejecting an appeal by developer Sean Hope, seen at right with back to camera. (Photo: John Hawkinson)

Hope argued to the board that 12 Arnold Circle “is unique” in being a vacant building on the market where there are plans to create more than 10 housing units and more than 10,000 square feet of living space – criteria in the affordable housing ordinance adopted April 3, 2017, but rare in Cambridge, where it’s usually far larger new development discussed under the law. “The board should not be concerned that this would weaken the inclusionary housing ordinance as a whole or have another case come after it,” he said. “It is not precedent.”

Hope, a well-known real estate lawyer, community leader and former BZA member, has also made a name for himself by developing two 100 percent affordable housing projects: Port Landing on Harvard Street in The Port neighborhood, with 20 apartments; and Frost Terrace, a 40-unit development in Porter Square that could open in 2020. He told the board he fully supports the inclusionary housing ordinance. And he garnered a letter of support from city councillor E. Denise Simmons.

“I do question the fairness”

Simmons pointed to the section of the ordinance that puts buildings vacant for at least two years under its purview, one of the reasons the city gave for ruling that Hope must comply with the rule. She said that section was aimed at another dilapidated project – Vail Court in Central Square – that the city acquired by eminent domain in September 2016 after it sat empty for many years. (That project is also in court, but not over inclusionary housing).

Krohn and his wife Karen, on the other hand, “actively sought to remain occupied in their residence but were prevented from doing so due to the fact that the city had turned off the residence’s utilities,” Simmons said. The Krohns couldn’t afford to meet the city’s safety requirements, the letter said.

“While I do not question the findings or remedial actions taken to protect the health, safety and welfare of the city, I do question the fairness of applying [the ordinance] to this unique (and, to my knowledge, unprecedented) set of facts,” Simmons wrote.

Alexander, however, cited the city’s priority of increasing and maintaining affordable housing, among other things, in explaining why he was voting to uphold the building commissioner’s decision. And he bristled when Krohn said it was “inappropriate for you to second-guess councillor Simmons.”

The city and Hope have filed several opposing legal arguments about the issue. Hope focused on the vacancy provision in his statement to the board on Thursday, asking when the two-year vacancy began. Unless the ordinance provides specifically that it can operate retroactively, he said, the two years should not begin until the new ordinance was first advertised Dec. 1, 2016. Otherwise owners of vacant buildings such as Krohn wouldn’t have a clear picture of their risks, Hope said.

City Solicitor Nancy Glowa didn’t respond directly to Hope’s argument about notice that the ordinance is retroactive. In a July 24 letter to the board, Glowa said the ordinance clearly applies when an owner seeks a building permit after Dec. 1, 2016.

“Thus, because no building permit has yet been applied for, and there has been no occupancy of this building for well over two years, the inclusionary housing provisions of the ordinance apply to this project,” the letter said. Glowa sat in the audience at the Thursday hearing; she declined to speak when Alexander invited her.

Krohn’s problems involving 12 Arnold Circle began with a fire department inspection in April 2011 that found the building filled “floor-to-ceiling with combustible materials.” Not much had changed in December that year when a frozen water pipe broke and a building inspector visited. He found water leaking through a building “filled floor to ceiling with various belongings.” According to Krohn, as tenants moved out of the building over the years, he used the empty apartments to store an extensive collection of books and papers.

The Krohns also bought a former school in Palmer with plans to transfer items and store them in that building. They ran afoul of local officials there as well, who filed charges in housing court over the condition of the property. In that case, the couple was able to satisfy the town and the charges were dropped. 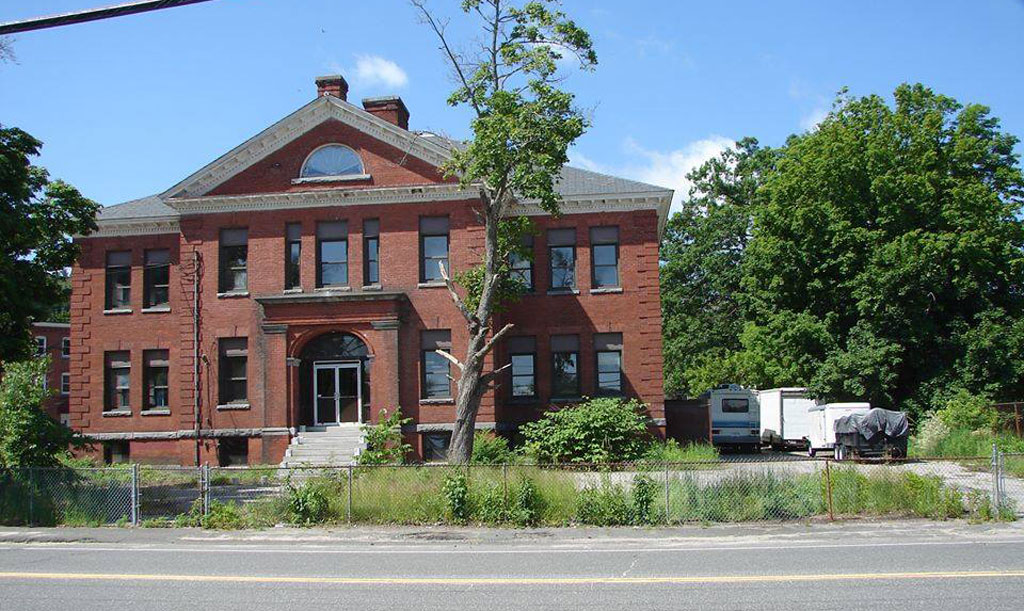 The former Three Rivers Grammar School in Palmer, brought by Krohn and his wife in 2008 for $130,000. (Photo: Palmer High School Alumni via Facebook)

According to Glowa, Cambridge officials turned off water, gas and electricity to 12 Arnold Circle in December 2011, citing safety. Officials also declared the building uninhabitable. The Krohns could no longer live there; they moved to an apartment on Huron Avenue but say it was intended to be temporary.

Over the next four years inspectors visited repeatedly and found no meaningful progress. Krohn maintained he was doing the best he could despite physical and mental disabilities and lack of money. Finally, in October 2015, Krohn refused to allow access to the building, according to papers filed in court. Krohn said in a response he merely asked for a delay in the inspection.

The city filed suit in Middlesex Superior Court in May 2016 seeking an order requiring Krohn to clean up the property and make repairs. Krohn had the suit removed to federal court, where a judge ordered the building put in the hands of a receiver over Krohn’s objection. In October the federal judge sent the suit back to state court on the issue of the inclusionary housing ordinance.

It’s a far cry from Krohn’s life in his 20s and early 30s. He graduated from the Massachusetts Institute of Technology in 1959 and went on earn a master’s degree and a doctorate from Harvard University. He and another mathematician, John Rhodes, developed an important theorem that bears their names, useful not only in mathematics but computer science. He and Rhodes also formed a software company that won federal contracts, later selling the company at a profit.

Krohn moved into 12 Arnold Circle in 1972 as a renter, he said. That same year, he lent $120,000 to a Mexican businessman, according to federal prosecutors. When he didn’t get repaid, Krohn traveled to Mexico but failed to get his money back. Prosecutors said he and another man, whose sister Krohn was dating, lured the businessman to Washington, D.C., using fake names and forced the businessman to seek money from his friends and relatives to repay Krohn.

Krohn was arrested twice in the case in 1973 and 1974 on kidnapping and murder charges, but both cases were dropped. Prosecutors said later that there was no evidence of any murder. But the investigation continued, and in 1977, Krohn pleaded guilty to extortion and conspiracy. He was sentenced to 10 years in prison and served three. Krohn said in an interview he pleaded guilty only because he was facing a potential life sentence and felt he had no choice.

Meanwhile, Krohn pursued a career in the law; he has represented himself in most of the lawsuits he has filed, and in the 1977 criminal case. He sued Harvard Law School for discrimination after the school rejected him in 1975, but he lost the suit.

Krohn graduated from the former New England School of Law in 1996 and passed the bar exam, but the Board of Bar Overseers refused to allow him to practice because of his felony convictions and conduct. The Supreme Judicial Court upheld the decision, citing concerns about Krohn’s behavior in addition to the convictions. One example, the high court said, was Krohn’s “repeated, supported, ad hominem attacks on the ethics, integrity and motivations of others” involved in the consideration of his application.

At the Board of Zoning Appeal hearing, Krohn and his wife Karen said they hadn’t received any complaints about damage from the tree that fell on the neighboring buildings. Afterward, owners who had come to the hearing spoke to the couple in the hallway outside the hearing room.

They didn’t get any assurances of help – the Krohns have said they don’t have the money to repair their own building. “It’s a question of whether we’re really liable,” Krohn said later. “It was a really windy day.” Karen Krohn suggested that one of the neighbors had used bleach to clean her deck and the chemical dripped onto the ground, damaging the tree roots.

Update on Dec. 5, 2018: The Krohns have arranged for the fallen tree to be removed, a neighbor of 12 Arnold Circle said Wednesday, but the couple has not provided help for repairs.

This post was updated Dec. 6, 2018, to correct and add information about the tree falling onto property at 10 Arnold Circle and 15 Lee St.