New motion about official’s use of racial term eliminates ‘investigation,’ stresses the context 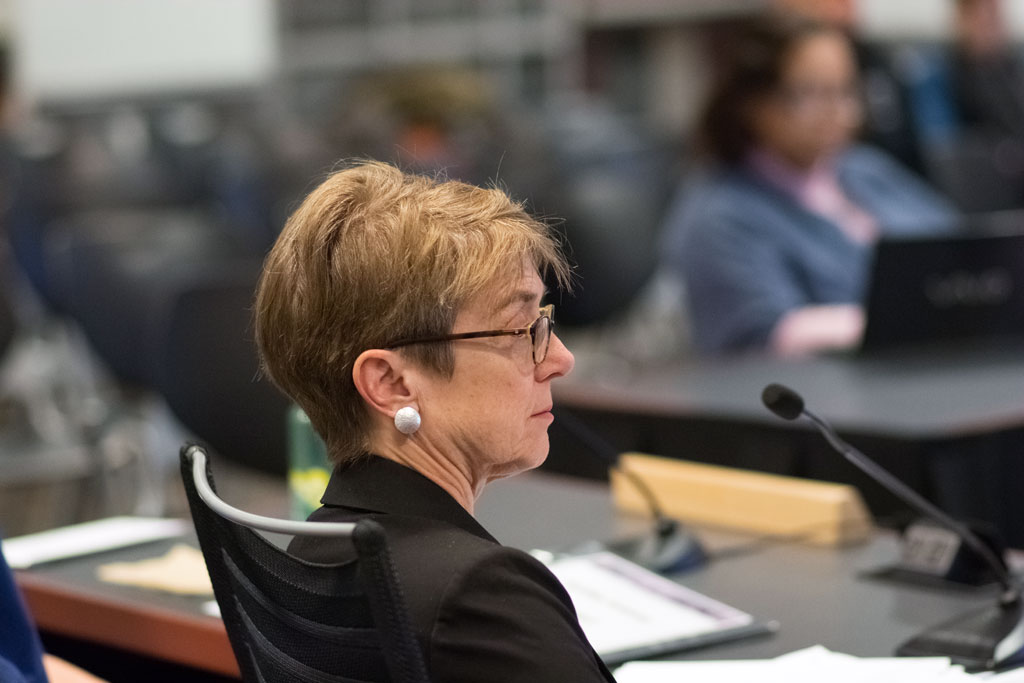 New motion about official’s use of racial term eliminates ‘investigation,’ stresses the context

The motion made by committee member Manikka Bowman on Tuesday asks an attorney’s “comprehensive review of the conduct of the classroom panel discussion” in which the incident took place, including how the panel was approved and organized and how panelists were prepared for the event by the organizer, Cambridge Rindge and Latin School history teacher and Black Student Union adviser Kevin Dua.

Bowman’s motion, seeking services not to exceed $9,500, was approved by six members of the committee, with Laurance Kimbrough opposed.

“As someone who was at the panel discussion … I don’t have any real sort of [questions about] what took place. I’m just trying to sort of further understand what it is exactly we’re looking to investigate,” Kimbrough said. “I have concerns about whether or not it’s the role of the School Committee to be investigating and looking at what teachers are doing in their classrooms.”

It was also new for the committee to be investigating one of its own.

The incident came during a Jan. 10 classroom panel discussion about racial slurs, the Internet and filters that Cambridge Public Schools puts on its student Chromebooks and Web networks. The official, Emily Dexter, and Kimbrough were the two School Committee members attending. Superintendent Kenneth Salim was also present. The discussion itself had a provocative title that used the full “N-word,” and Dua – who is black – used the term several times in full before Dexter did the same, once. Dexter is white.

“Many students and adults rightly took offense,” Dexter said in a statement Jan. 31, the day after the superintendent sent an email to the Cambridge Public Schools community about the incident. By that time she’d returned to Dua’s class Jan. 17 to face students she’d offended, but that visit went poorly also; student Rahel Mahari told The Register Forum newspaper that Dexter “was making her apology seem more like a class.”

With the original motion for an investigation adopted Feb. 5, Kimbrough wondered why the matter was back for a vote.

The motion was reworked based on “challenges” from Dexter’s lawyer, but was not so different from the original, Bowman said. “This is not to rehash whether or not we’re going to do the investigation or not. This is simply giving us the framework in order to do it,” Bowman said. “There was a lot of things that played into what happened [Jan. 10] and we need to reflect on it as a body, which is our responsibility.”

Bowman returned to the topic more pointedly after comments from Mayor Marc McGovern and a statement by Dexter.

In discussing changes in the order, the mayor remarked that the original terminology was flawed because “an investigation implies there’s going to be some kind of finding of guilt or innocence” – but pointed out that student voices were key to the fact-finding, and that time was running out to get those voices on record before the school year ends June 18.

Dexter also had a take on the new language.

“I do interpret this as quite a change,” Dexter said. “I’m pleased that with this new motion that committee is taking an inquiry approach … rather than an accusatory and investigative approach. It will be helpful for all of us to understand the context, what took place in the classroom that day and the aftermath.”

She said she was “extremely concerned that the School Committee’s original response to this incident as voted on Feb. 5 was not in keeping with our belief in restorative practices, and would therefore not lead to anything that benefited the students. It is my hope that with this educational program review we will come together in a way that achieves positive change.”

“At the Feb. 5 meeting, the maker of the original motion stated that the motion was not about me. I assume that that is true of this new motion,” Dexter said. “Assuming that this motion in no way directs the superintendent to conduct a disciplinary investigation of a School Committee member for which he has no authority, I will be voting yes.”

While apologizing “unequivocally to those I offended,” Dexter pointed to work she’s done over the years to help students combat “manifestations of systemic racism and prejudice,” and Bowman, who is black, responded that her motions have been motivated by a wish to help the same students, who have asked for years for officials’ help against campus racial aggressions big and small – and which she said Dexter’s legal concerns delayed.

“The reason that we are here is because a colleague sought legal counsel that made us have to take a step back and delay this process,” Bowman said. “I am not willing to sit at this meeting and not acknowledge that that’s the case.” 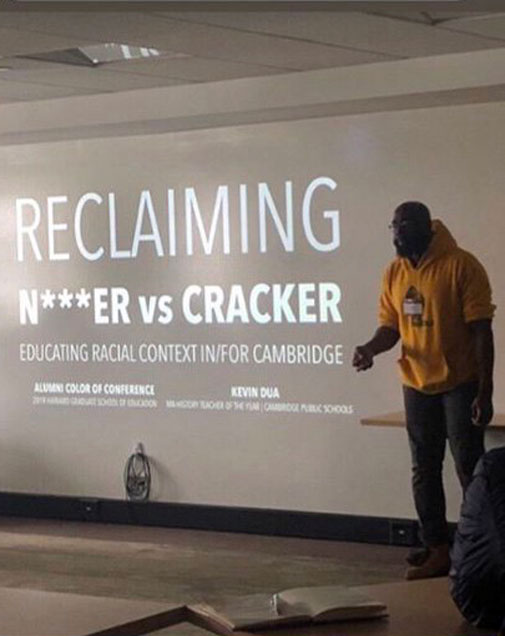 There looks to be a lot to unpack about the Jan. 10 panel discussion, which was called “Reclaiming: [N-word] vs. Cracker: Educating Racial Context in/for Cambridge.” Though in Dua’s invitations to officials to attend and at the high school presentation itself the racial term was used in full, the superintendent has since told The Boston Globe that he wasn’t just “uncomfortable” at hearing Dexter use the term, but at Dua’s use of it. In a letter to the School Committee afterward, Dua opts not to use the full term; and when Dua brought the presentation to a Harvard Graduate School of Education Alumni of Color Conference held March 1-2, it was accepted as “Reclaiming: N***** vs. Cracker: Educating Racial Context in Cambridge” and presented with another adjustment, led off as “Reclaiming: N***er vs. Cracker.”

Darnisa Amante, founder and head of the Disruptive Equity Education Project and leader of a “Cambridge Digs Deep” series of community conversation on race, equity, power and privilege, added a point of inquiry when she was asked whether Dexter’s language may have taken cues from Dua.

“I can’t exactly speak to Mr. Dua’s facilitative method. But I do know as someone who is facilitating this work often, a very powerful way to start is … setting what I call an ethos,” said Amante, who is black, as a guest on a WBUR radio segment Feb. 14. “Because people are usually coming to conversations like these uninformed, some points around ‘Here are some things that might be helpful to know’ might be [appropriate].”

“Particularly around the N-word,” Amante said, “many people are often not sure when it should be said [and] who has the right to say it … It’s often helpful to say in the conversation, ‘We are going to talk about reclaiming, and we might feel more comfortable if only people who identify as black or of color are using the term.’”

Announcing that ethos “would have been a really powerful way to call people into the conversation while simultaneously informing people this word can still cause hurt,” she said.

Yet more grounds for exploration could come from the committee itself. Kimbrough, who ran for office on a platform of dismantling the legacy of white supremacy and white privilege, has told reporters that given the context around Dexter’s use of the term, “I was not offended by what was said.” On Feb. 5, when Bowman made the original motion for an investigation, he tried to amend the order to say Dexter was only “quoting” the term, but the amendment failed.