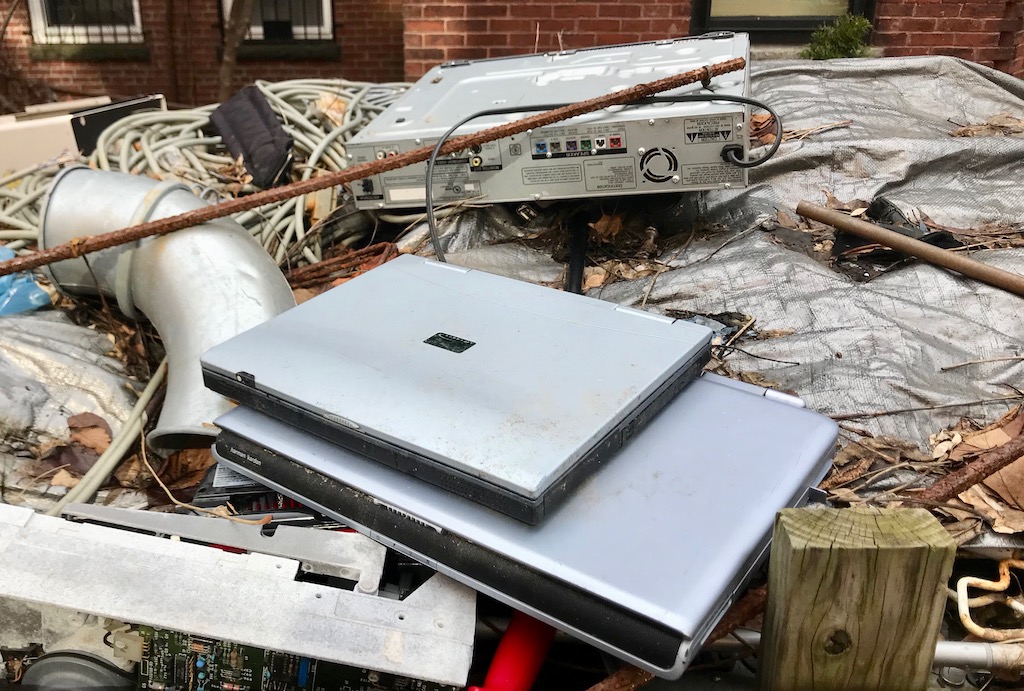 A dumpster outside 12 Arnold Circle shows efforts made to clear out a building’s worth of books, papers, equipment and personal belongings. (Photo: Marc Levy)

A Middlesex Superior Court Judge Wednesday said she would order the sale and quick cleanup of a dilapidated building in Mid-Cambridge as soon as the city and other parties in the three-year legal struggle present her with an agreement, perhaps as early as Friday.

Judge Maureen Hogan acted to break up the legal logjam over the future of 12 Arnold Circle after a lawyer for developer Edward Doherty, who intends to buy the building, said Doherty would “immediately secure” the property and clean up the exterior after the sale closes. “We’re prepared to close and have the property remediated before we’re in short sleeves,” attorney Peter Morin said.

At that, assistant Cambridge city solicitor Paul Kawai told Hogan that the city would withdraw its objection to the sale, as long as all the commitments made at Wednesday’s hearing were ordered by the court. The judge said she needed the city, Doherty and the court-appointed receiver overseeing the building, Daniel McAuley Jr., to present her with a proposed court order.

And quickly. “I expect this to happen in a few days,” Judge Hogan said, suggesting she might sign an order by Friday.

The 12-unit, four-story building has been vacant since at least 2012, when city inspectors found structural damage, other safety violations and books and papers filling the structure to the brim. Owner Kenneth Krohn, 80, had lived there for years and used the space to store his extensive possessions, he said.

When Krohn didn’t correct the violations – he didn’t have enough money, he said – the city sued him in court in 2016. Since then, the case has been in three courts, but the violations remain, and neighbors have watched the building deteriorate. A rotten tree on Krohn’s property fell on an adjacent building during high winds almost a year ago, causing no injuries, but substantial damage.

Developer Sean Hope agreed to buy the property last year, but the deal failed after the city ruled that the building was subject to the Affordable Housing Ordinance requiring that 20 percent of newly built units be affordable to low- and moderate-income residents. Hope appealed the ruling to the Board of Zoning Appeals, and lost. Afterward, his financial backers withdrew.

Doherty is willing to buy the building for $4.6 million with the affordable housing restriction in place, but if he and Krohn can persuade a judge to overrule the zoning board, Doherty will pay Krohn a $1 million bonus. Krohn bought the building in 1974 for $95,000.

Both men are in Land Court and also before Hogan seeking to overturn the decision. The judge made it clear Wednesday that the zoning ordinance is a separate matter from the sale, “on a parallel track,” she said.

The sale takes precedence because it promises to correct the longstanding violations at the property, Judge Hogan indicated. “There was an agreement to remediate by January of 2017. It did not happen. That is my concern,” the judge said.

Full building to be packed up

Krohn’s deal with Doherty had bogged down in a tangle of conflicts over the parties’ responsibilities and powers. Morin, Doherty’s lawyer, said the receiver had to approve the sale to satisfy worries about whether Krohn had the power to sell the property. But McAuley said he couldn’t sign the purchase and sale agreement unless a judge ordered the sale. Krohn asked the judge to approve it.

The city objected to the sale because it didn’t require Doherty to make immediate repairs. After Doherty’s lawyer said he would begin repairs immediately after closing, Judge Hogan asked Kawai and Morin when they had first talked to each other about the case. The evening before the Wednesday hearing, Morin said. The initial filings about the sale were made Feb. 28.

Assuming the city, Doherty and McAuley agree on a proposed court order and the judge signs it, one potential snag remains: Much of Krohn’s possessions remain in the building. Krohn and his wife, Karen, say they will have the money to clear out the building when they collect Doherty’s deposit of $460,000, after the sale closes.

Hogan asked how there could be assurance that the deposit would be used to move out the contents of the building, and in what time frame. “I can promise you that I have a moving van and storage company waiting with bated breath” for the go-ahead to start emptying the building,  said Krohn’s wife, Karen Krohn.