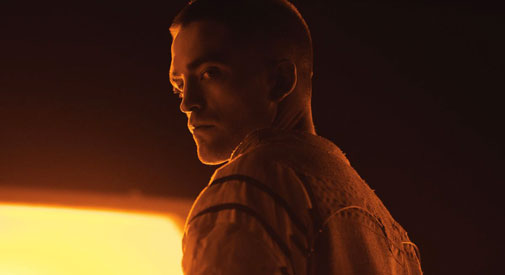 Way up high, what’s that in the sky? Looks like a metal shipping container with rocket boosters glued on. A bit hokey indeed, but would you believe me if I told you “High Life” was the first English-language film from French auteur Claire Denis, and it’s a sci-fi adventure? Strange but true, though in fact there’s very little sci-fi-ish about the death-row deep-space mission that’s more about colliding personalities and strange sexual dances in dark places. Yes, in outer space no one can hear your orgasmic cries of ecstasy, but that’s mostly because they happen in a sealed box. (More on that later.) 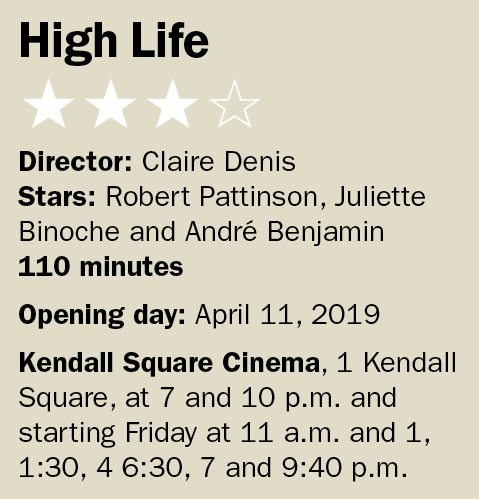 The crew of that shipping container – the “7” – are all criminals (“scum, trash and refuse”), rocketing toward a black hole while radioing back to command their findings. Kind of. The one thing they do seem tasked with is the prospect of reproduction in outer space. The men must fill cups in a booth (it looks like a photo booth in a mall, but is not to be confused with the formerly mentioned “box”) and are given precious sleeping pills for their effort. The women are impregnated occasionally, but the birth of a child usually proves fatal for mother and infant. All this is orchestrated under the watchful and controlling eye of Dr. Dibs (the eternally eternal Juliette Binoche), who, in her tight nursing uniform, seems to be the closest thing to a commanding force aboard a ship with the feel of a basement boiler room or padded-cell dormitory. One crew member won’t share his seed, Monte (Robert Pattinson, who pleasingly keeps getting further away from his “Twilight” origins), and seems more in control of his own fate than others on the 7.

Given the lethality of childbirth and the fact that this is a crew of social marauders and murderers relegated to the deep, lawless abyss of space, what could go wrong? A primal carnage works its way through the 7 about midway through the film (as well as a realization that the narrative has been moving in time hops), with much of the violence meted out being raw retaliation, or the culmination of adamant disagreement. Folks aboard seem more interested in their two pounds of flesh and sleeping pills than any destination or technical issues that could imperil them. Of all the wacky internal violence, only one of the acts is sexual in nature – mostly because the 7 is equipped with a “fuck box,” a high-tech Shaker booth of sorts. We visit the Orgasmatron device only once, as our fair Dr. Dibs takes her turn. Inside there’s a well-endowed Sybian device, with trapeze handles to add you your bucking pleasure. Binoche, with a flowing, glorious mane of dark hair, is framed from her bare milky back, an image of Lady Godiva riding off into the dark night of endless pleasure.

Clearly Denis is operating under the creative influence of Andrei Tarkovsky’s 1970s sci-fi classics, “Solaris” and “Stalker,” potent blends of psychological thriller and adventure into the unknown. There’s even the unmistakable image of a body floating in space eerily similar to Princess Leia (Carrie Fisher) suspended in the cold dark outside the hull of a rebel cruiser in “The Last Jedi.”  It’s hard to imagine Denis borrowing from such commercial fare, but there it is. Overall, the unthinkable mix is a jumbled delight. Like Gaspar Noe’s “Climax,” this could have been set in any confined locale – a sealed tier in a parking garage, a cabin atop a snowbound mountain, an ocean liner stranded at sea or even a ginormous freight elevator during a power outage – and the result would be the same. Denis is one of the most maverick female filmmakers out there, in good company with Kathryn Bigelow, Lynn Ramsey and Debra Granik, and adds her hard feminist fingerprint to “High Life” as she has in great films such as “Trouble Every Day,” “Beau Travail” and “White Noise.” Her latest adventure  isn’t quite on par with those films (you can still catch several at the Brattle Theater as part of “The Good Works of Claire Denis” series) but it is a riveting psychological odyssey from launch to climatic nadir.