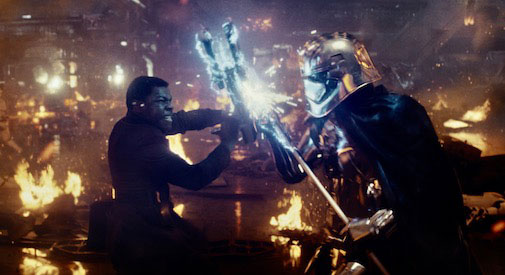 “Star Wars: The Last Jedi” picks up right where “The Force Awakens” left off, and smartly so with Rey (Daisy Ridley, amping up the grit factor favorably) on a remote, bucolic planet trying to press Luke Skywalker (Mark Hamill) into a few rounds of Jedi training while Luke’s sister, Princess/Gen. Leia (a fitting final performance from Carrie Fisher, who passed away after principal photography completed) tries to steer the remaining Resistance forces to a new base with the evil Empire’s First Order in hot pursuit. How it all sorts out isn’t a straightforward affair, and that plays to its advantage with plenty of twists, turns and pleasant surprises to hold an audience rapt over the two-and-a-half-hour running time.

Given all that, it’s still an unenviable task to have to take over the reins from J.J. Abrams, the creative wunderkind who helmed “The Force Awakens” and has a reputation for making what’s old trendy and hip again – i.e., the “Star Trek” reboot – but Rian Johnson, who also scripted, proves more than game to go where Abrams has taken the trilogy and beyond. To be sure, there’s a lot going on in “Last Jedi”; the gaping absence of Han Solo (Harrison Ford), the elevation of Skywalker back to the fore (Hamill well up to the task), the deeper darkening of Darth Vader successor Kylo Ren (a palpably conflicted Adam Driver) and the Trump-like megalomania of the craggy supreme leader with the silly moniker of Snoke (Andy Serkis doing what he does best: seamless live-action capture) and even Yoda – yes, Yoda. But Johnson, who had so effectively juggled time travel threads folding back in on themselves in the satisfying sci-fi thriller “Looper” (2012), orchestrates it all masterfully, jumping from one far-flung point in the galaxy to the next without disconnect, and with plenty of humor and wit to fill any dead space.

If the succession was unclear at the end of “Force Awakens,” it’s not here: Oscar Isaac’s X-wing hotshot Poe, full of insubordinate sass and can-do moxie, is the clear fill-in for Han; John Boyega’s stormtrooper turned rebel Finn and Rey are the approximate youthful surrogates for Luke and Leia. Just where it all goes after this chapter is anybody’s guess, and one of the teasingly piquant pleasures of the film.

To explain the inner workings of the plot more would be a disservice to loyalists and pointless for those who have somehow been locked away in a vault for more than 40 years without access to a TV or the Internet. But, to put a loose wrapper on it, the ebb and flow of power and total annihilation all comes down to the few (Luke, Leia, Snoke, Ren and Rey) with the force inside them – control it and you can control the universe, or so it seems. In that regard “Last Jedi” becomes a deeply intimate affair for Ren and Rey, as they communicate with one another (both seeking to turn the other) as if they were in the same room, though they are galaxies away. Feeling the force was dealt with with far greater subtlety and finesse in other chapters. As it is here, it feels hammered and shoehorned into nearly every frame, though not so much that it becomes a detriment the way overindulgences have weighted other installments, like the cuddly Ewoks in “The Return of the Jedi” and the spectacle of Jar Jar Binks in the first three episodes

Johnson’s artfully meted use of CGI magic is largely seamless and never gratuitous – a continued relief after Lucas got carried away in Episodes I, II and III. Some of the indigenous creatures on Luke’s verdant rocky island and the salt-mining planet that the rebels hole up on get rendered a bit too Disney cutesy for the film’s own good, but they’re minor infractions and choices you could see Papa Lucas smile at with warm, avuncular consent. The triad of droids, R2-D2, C-3PO and BB-8 are all back, but since “Last Jedi” marks the passing of the baton, this is the round, orange droid’s ball game. Personally I’d love to see one of the “Star Wars” one-off “Stories” like “Rogue One” be about the three Greek-chorus bots out on their own adventure, with Chewbacca up in the Millennium Falcon providing support and cover – as he does here so dutifully with his cascading falsetto roar filling the screen as it has for decades.

By the time the credits roll (there’s some great bit parts by a few Hollywood A-Listers in key roles along the way), “The Last Jedi” registers as a darker and more robust chapter than “The Force Awakens.” It’s positioned to be the “Empire Strikes Back” of the new trilogy – chapter-wise, “The Last Jedi” is officially “Episode VII” of the triple-trilogy franchise (“Strikes Back” is V, by comparison, though by theatrical release, it’s No. 2). Abrams is back in the director’s seat for Episode IX with a tall stick to be measured by. Given the creator’s past response to challenges, that bodes well for audiences yearning for the final chapter.