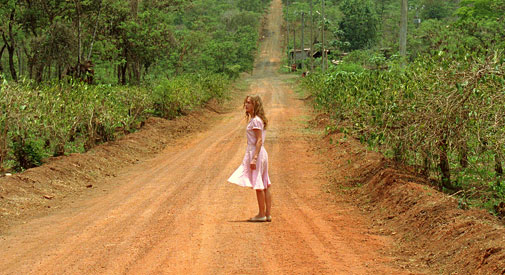 The Brattle Theatre begins its fragmented series “The Good Works of Claire Denis” Monday – kicking off aptly with “Beau travail,” the haunting 1999 take on Herman Melville’s “Billy Budd” that brought the French filmmaker to international attention. For those not familiar with Denis, she’s something of a Kathryn Bigelow contemporary: a female filmmaker who is unabashed in tackling masculine material. The repertory program is broken into two sections, March 25-27 and April 9-11. (In the interim, the 35th Wicked Queer LGBT film fest will set up at the Brattle.)

Of the eight films on the slate, personal favorites include “Trouble Every Day” (2000), which may be one of the creepiest, most erotic and grim vampiresque films ever. It would make a perfect double bill with Bigelow’s “Near Dark” (1987), even if the films have little in common in texture and tone. The film plays April 9. Denis’ “White Material” comes the next day, offering something of a personal reflection on racial unrest around a Francophone coffee plantation in a fictional African country. Denis, while born in France, grew up in various parts of French colonial Africa. The film uniquely pairs the exquisitely sublime Isabelle Huppert as the imperiled plantation matriarch and Christopher Lambert (yes, the “Highlander” and “Tarzan” guy) as her ex-husband. Denis’ 1988 debut “Chocolat” (not in the series) also dealt with themes of French occupation and western racism in West Africa.

Denis has shown the tang and inherent guilt of those colonial origins in many of her films, along with a predilection to weave in immigrant stories. “I Can’t Sleep” (1994), which plays Tuesday, revolves around a diverse Parisian immigrant community with cross-cutting intersections with the real-life “Granny” serial murders at the time. The similar and well-reviewed “35 Shots of Rum” (2008) plays April 10 with “White Material.”

As a bonus, Denis will be at the Brattle on April 1 (no joke) to share her latest effort and her first English-language film, “High Life.” The sexually charged film details a crew of death row inmates on a dangerous, deep space mission to explore a black hole. With Robert Pattinson and the eternally ethereal Juliette Binoche in the cast, you can be certain this will not be your typical space quest. The event, brought to town by the Independent Film Festival Boston, is free and open to the public on a first-come, first-served basis. For information, see the Brattle website.