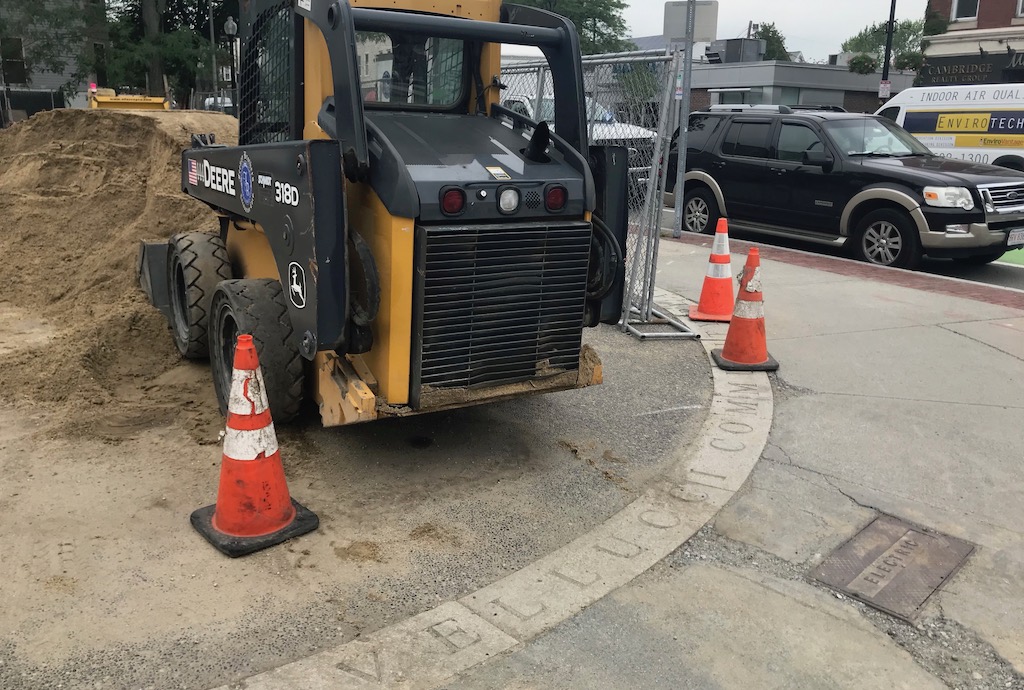 A 30 percent rise in costs for Inman Square construction – to $7.9 million from $6 million on a project once expected to cost $3 million – elicited sharp questions from opponents about city processes, while the City Manager’s Office called the price hike an unfortunate but unavoidable regional reality.

“Bids are coming in 25 percent to 30 percent higher than estimated throughout the region due to the strong economy and tough competition for contractors,” City Manager Louis A. DePasquale told councillors in a memo.

Even anticipating awarding the Inman Square work to Newport Construction as the lowest “responsible bidder” of three received May 16, the tw0-year project will cost around 30 percent more than estimates seen by councillors in October.

They approved funding Oct. 15 on a 6-3 vote, with opposition coming from Craig Kelley, Tim Toomey and E. Denise Simmons. Those three went on to become the signers of a Monday order asking why the construction estimates for the Inman Square redesign project were “so inaccurately low” as well as “what steps are being taken to ensure that the project will not lead to further cost estimate overruns” and how such inaccurate cost estimates will be “avoided for all projects in the future.”

The previous week, things had gone the opposite direction: A roof replacement at the Kennedy-Longfellow School budgeted for $4.2 million ended with $1.8 million unspent that the council voted to send on for use by other capital projects. “The original estimate was twice the actual cost?” councillor Quinton Zondervan asked city staff before voting.

“For roofs, we get preliminary estimates through the [Massachusetts School Building Authority], and usually they’re very high. And so when we actually go out to bid, we usually see far more favorable pricing,” said David Kale, assistant city manager for finance.

The higher construction cost for inman Square won’t have to come to the council for a vote; the city’s budget set aside bicycle and pedestrian infrastructure funds for Inman Square “if needed,” because the safety of people traveling through Inman has been a driver of the project – which accelerated after the death of bicyclist Amanda Phillips there in July 2016. Some capital repairs budget for sewers will into Inman as well, to cover utility work, DePasquale said, and “with these funds, the project can be awarded and funded without any additional appropriations.”

There was no promise made that this would be the end of the project’s needs – just that any additional funding needed for construction contingencies wouldn’t be heard until planning for the next fiscal year. (Construction is also not the only expense on the project. In October, it was a $7 million project, with $6 million of the total going to construction.)

The order about estimated project costs in Inman Square and beyond passed without discussion by councillors. But two residents spoke during public comment.

“I wonder if the city manager particularly lowballed the cost, or was it one of his staff?” said Sara Mae Berman, who offered anecdotal evidence that regional construction cost increases were only as high as 10 percent. “What else has the city manager made a mistake of 30 percent in his planning for Inman Square? Has he made a mistake of 30 percent in how safe it will be? Because we have traffic engineers we’ve consulted who say that the projected plan is not safe at all.”

Berman urged councillors to get a second opinion on cost estimates, while fellow Inman Square neighbor Megan Brook had a challenge for them.

“My bet is $100 to the charity of your choice that this project will go over $8.5 million when all is said and done,” Brook said, asking councillors – whose rules prohibit dialogue with speakers during public comment – to signal that they’d take the bet.

When no councillors signaled, Brook said, “What would I conclude from that? I would conclude that you know it’s going to go higher.”