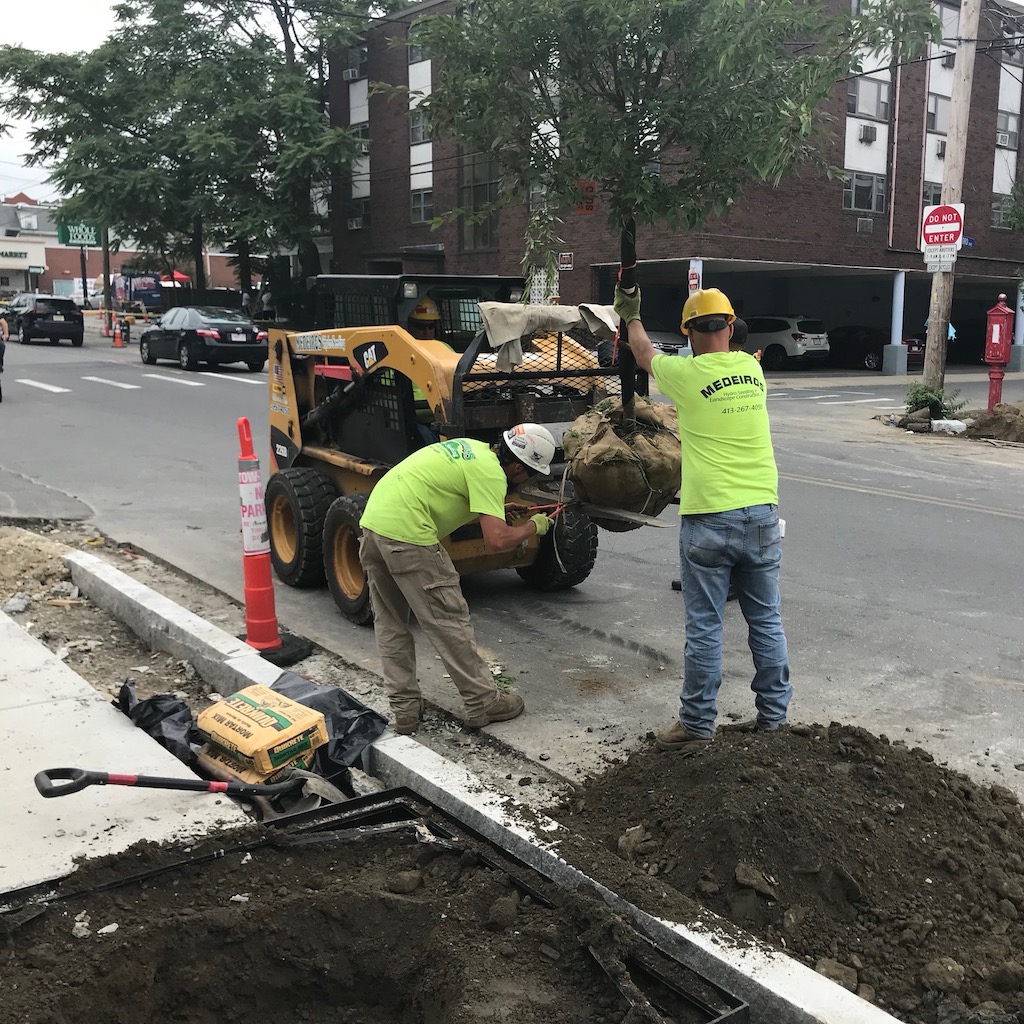 In Inman Square, among those still opposing a reconstruction plan in part because the project cut down four mature honey locust trees, hearing the name of the city’s chosen project contractor was not a comfort.

Newport Construction has been embroiled in a years-long legal battle with the City of Somerville over its 2017 removal of 38 trees along Beacon Street from Washington Street to Inman Square – trees that are just now being replanted.

But Newport, based in Nashua, New Hampshire, is also the “responsible bidder” chosen among three competing in May for a two-year road-bending project in Inman Square meant to improve traffic patterns and traveler safety, said City Manager Louis A. DePasquale in a Monday memo to the City Council. “We are pleased with the contractor, Newport Construction, who has completed numerous projects in the City and is well equipped to handle the complex Inman Square project,” DePasquale said.

Some residents were already unhappy that construction costs approved by the council in October at one price estimate had ballooned by 30 percent, to $7.9 million, which DePasquale said was a regional issue blamed on a strong economy and tough competition for contractors. (A slightly lower bid, by Acton’s Onyx, was rejected; Avon’s D’Allessandro came in with a significantly higher bid of $9.3 million.)

A look across the town line at the legal dispute with Newport is further unsettling them.

“How in the world can the city manager judge Newport Construction to be a ‘responsible bidder’ who is ‘well equipped to handle the complex Inman Square project’?” asked Jonathan Harris, a leader of project resisters as a member of the Friends of Inman Square group.

Newport’s cutting down of the trees without notice was “in direct violation of their contract,” Harris said. It also appears that the company took down two trees that were not in the plans, which has been called a separate contract violation.

On Thursday, city councillors expressed alarm as well. In an order to be heard at their Monday meeting, Quinton Zondervan, Craig Kelley and Dennis Carlone ask the city manager to explain Newport’s selection and say the company “cannot be trusted to carry out this project in a safe manner based on their past performance just down the street from Inman Square.”

The trees were taken down Oct. 6, 2017, and the City of Somerville was quick to say it was as surprised as its residents, as the trees were scheduled to be taken down the next spring. In an ongoing exchange of letters in which the city seeks $38,000 in damages from Newport, Somerville tree warden Steven P. MacEachern said the work was done “without the prior required approval of this office,” and a state Department of Transportation contractor evaluation dated Oct. 23, 2017, including several criticisms of the company’s work that included the tree cutting. The work “was not listed on the short-term schedule or discussed at the project progress meeting, creating a major issue with the City and local residents,” said the evaluation, which gave Newport an overall score of 66 percent.

The company’s president and chief executive, Richard A. DeFelice, rejects responsibility. In a March 25 letter to Somerville’s Law Department, he sidestepped the issue of notice raised by the city and state: “The project documents include stamped, engineered plans that clearly show the limits of construction and associated items to be executed. Newport has followed these plans and has executed all items under its contract,” DeFelice said. “Your request for payment is addressed to the wrong party. Newport did not design this project, nor did Newport issue the legal contract with documents to be followed and adhered to.”

Newport has also had legal clashes in Chelmsford and Westford, where it was fined $20,000 by the state over groundwater testing. The company submitted samples of public drinking water claiming they were groundwater samples, filed construction updates late and had site inspections done by someone who lacked the proper license or credentials, according to state documents cited by the Lowell Sun.

This story was updated June 21, 2019, to clarify remarks by Jonathan Harris.