‘Under the Silver Lake’: A distracted detective searches for the frequency in ambitious oddity 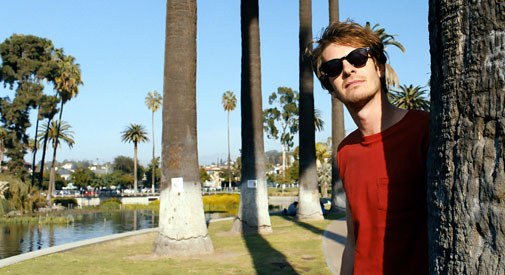 ‘Under the Silver Lake’: A distracted detective searches for the frequency in ambitious oddity

For folks who dig seedy sagas that wind through the underbelly of Hollywood’s dream factory – say “Neon Demon” or “Inherent Vice” – David Robert Mitchell, who hit it big in the horror genre with “It Follows” back in 2014, has a strange one. “Under the Silver Lake,” something of a personal odyssey-cum-mystery, moves in skitters and tics containing a flood of cinematic homage (nay, make that overt: “Did you see that? That’s my Hitchcock”). And while not all of it sticks, it does add spice to the layer cake as it gets thicker and more pungent. 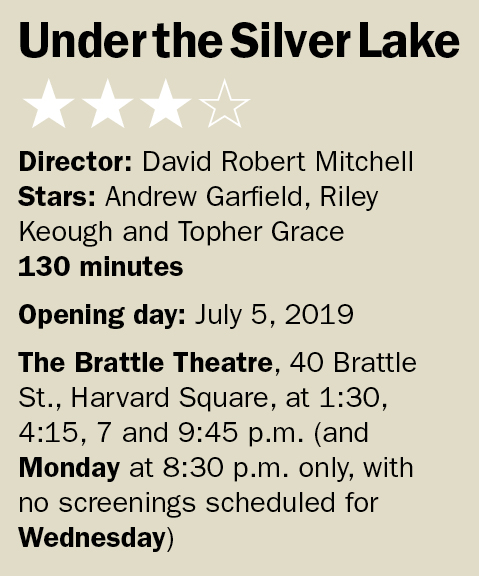 Sam (Andrew Garfield), our hero – or antihero, as is more the truth – is a mopey, shaggy dog, at best underemployed and most likely lacking a job at all no matter how many times he responds “good” or “busy” when asked about said occupation. He lives a lackadaisical existence ambling about a motel complex that has “Rear Window” views; across the way a comely occupant coos to her parrot, sans top. Like Jimmy Stewart, Sam’s got binoculars handy to drink it all in, and what’s this? Down by the pool lounges Sarah, another fetching lass in a bikini (Riley Keough) with a fluffy white toy pooch. Before Sam has a chance to pursue Sarah (the gal at the pool) a friend with benefits shows up, and headboard-banging thumps ensue. What to make of Sam? The dude’s clearly a libertine under the sheepish, aw-shucks demeanor used when fielding calls from his mother, who likes to jabber on about the virtues of Janet Gaynor (I like his mom). Besides paying hypnotic witness to Sam’s self-indulgent, voyeuristic proclivities, not much really transpires for a while. There’s some noise on the TV and a local zine about a canine serial killer (yup, a doggie mass murderer) and a billionaire who dies in an enigmatic crash around the corner. Then Sarah goes missing and things get weird. David Lynch weird.

What follows is a seductive, disjointed downward spiral as Sam sets off searching for Sarah. Along the many strange pit stops are a crypt party at the Hollywood Forever Cemetery (hello Janet!), a dance club where Sam, on some type of hallucinogen, becomes wildly inspired by R.E.M.’s “What’s the Frequency, Kenneth?” and at every turn there’s Balloon Girl (Grace Van Patten), an aspiring actress and more who saunters through the film in a bathing suit, high heels, a red ballon and tight, tight piggy tails – in short, Lolita incarnate. Perhaps not intentional, but come on, onetime Spider-Man star Garfield recursively gets goo on his hands, be it the egging some kids lay on his car (his retribution to which is over the top and disturbing) or the masturbation session to his dad’s classic 1970s Playboy issue, and at one point (overt nod and wink) a Spidey comic book gets stuck to his hand. Hmm. In a more audacious scene, Sam kicks in the bathroom door on a pop star (he needs the secret code behind a hit’s lyrics) and drags the icon off the commode, but not before we get a long glimmer of the chart-buster’s fecal output, and beats him like Dan Rather in that R.E.M. song.

As gonzo as much of that sounds, the edgy, “did that really just happen?” bounciness of “Under the Silver Lake” becomes its appeal. Without such it might not have worked. If there’s any downside, it’s Sam’s passive-aggressive ebb and flows (not the psychological definition): He’s largely passive, with extreme eruptions of delusional rage. It doesn’t all hold together, and even if it did, would Sam be the kind of guy I’d want a beer with? The real bell ringer here is the exceptional cinematography by Mike Gioulakis (“It Follows” and “Us”) and the stylistic verve he and Mitchell cook up – it’s transfixing and transportive beyond all rights. As an erotic thriller, “Under the Silver Lake” might not quite achieve its money shot, but it is an ambitious, titillating spectacle, and a promise of more alluring things to come.